With Rollout of Caesar Sanctions on Syria, U.S. Is Just Getting Started in New Bid to End War 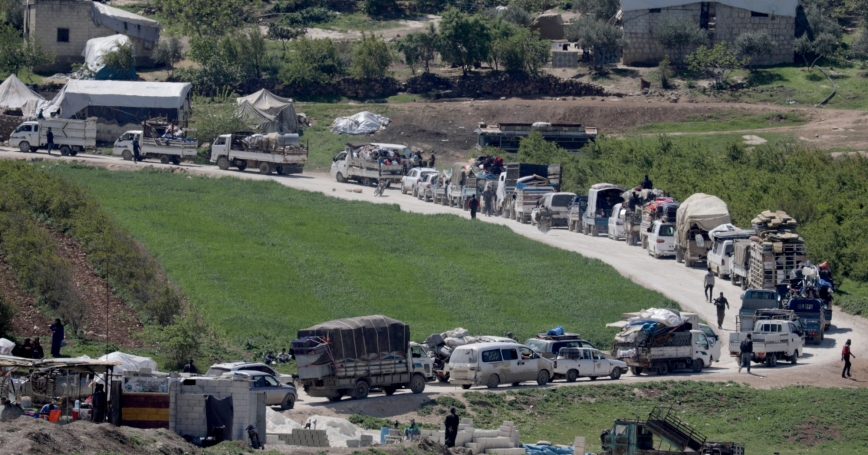 Internally displaced Syrians drive back to their homes, as some people are afraid of the COVID-19 outbreak in crowded camps, in Dayr Ballut, Syria, April 11, 2020

In mid-June, the U.S. government announced the implementation of the Caesar Syria Civilian Protection Act with a flurry of sanctions against 39 people and entities connected with the brutal government of President Bashar al-Assad in Syria.

“Today's designations send a clear message that no individual or business should enter into business with or otherwise enrich such a vile regime,” the White House announced. The Departments of State and Treasury made similar announcements affirming a new chapter to bring the devastating Syrian civil war to a humane end.

Yet a closer look at the 15 Department of State sanctions and the 24 Department of Treasury sanctions reveals a puzzling fact. All of the targets could have been sanctioned without the Caesar Act.

What are we to make of this? First, although implementation started in June, there is much more to come. Syria—and Russia and Iran—have not yet felt the Caesar Act in full force.

Second, more speculatively, the United States is likely to focus the Caesar Act's power on stopping the Assad government from reconstructing Syria on expropriated land in a way that would forever change Syrian demographics and prevent the return of refugees and displaced people, and enrich Assad and his allies.

Although implementation started in June, there is much more to come. Syria—and Russia and Iran—have not yet felt the Caesar Act in full force.

Approved in December 2019, the Caesar Act is named after a Syrian military police photographer who defected in 2013 with 53,000 photographs showing horrific torture by the Assad government. Some of the photos were first released in 2014, and their authenticity was confirmed publicly in 2015.

This torture is only one small piece of the devastation of a war that started in 2011. The war has resulted in 400,000 to 500,000 people killed, and more than 11 million people either displaced within Syria or turned into refugees outside their country—out of a prewar population of 21 million.

United Nations Security Council resolution 2254, unanimously passed in 2015, presents a pathway to ending the war, but Assad, backed by Russia and Iran and their armed forces, has refused to meet its terms.

In response to the brutality, Congress in December 2019 built upon previous U.S. sanctions and passed the Caesar Act as Title 74 of the National Defense Authorization Act (PDF), with President Trump signing it on December 20.

But the law did more than sanction Syria. Among many other notable terms, it called for sanctions on anyone supporting Russia and Iranian military contractors, paramilitaries, or mercenaries.

And even more important, it called for a strategy to stop reconstruction in areas controlled by Syria, Russia, or Iran where civilians have been forcibly displaced.

Syrian laws instituted since the civil war began cleared the way for Assad to take the land of the millions of displaced with essentially no recourse, forever blocking their return.

The nine entities sanctioned under the Caesar Act in June all have one thing in common. They are all involved in reconstruction projects that will benefit the Assad government and Assad associates. Seven are involved in a development called Marota City in western Damascus being built on expropriated land. Two are involved in the Grand Town Tourist City, a luxury development near Damascus airport.

Besides the firm signal that the United States will oppose Assad and his associates benefiting from their destruction of Syria, the nine Caesar sanctions also signal solidarity regarding Syria policy between the United States and the European Union, which had previously sanctioned people (PDF) associated with Marota City and Grand Town.

The Caesar Act gives seven conditions under which the sanctions can be lifted. None call for the removal of Assad. Instead, among other requirements, they call for the end of the repression of the Syrian population by the Assad government, Russia, and Iran, the release of political prisoners, and the safe, voluntary, and dignified return of displaced Syrians.

As of now, Assad is as unlikely to meet these requirements as he is to meet the terms of the relevant UN Security Council resolution, and Russia and Iran are unlikely to force him to do so. However, the United States and its European Union allies are intent on the fulfillment of the UN's terms for bringing the Syria conflict to a close.

Accordingly, with the Syrian economy collapsing, the United States will likely continue to add to the Assad government's pressure by ensuring that he and his associates do not benefit through any reconstruction.

“We are targeting those people who are benefitting from the construction” and creating “playgrounds for oligarchs” while the war rages, James Jeffrey (PDF), U.S. special representative for Syria, said in discussing the Caesar sanctions.

The June sanctions were a small opening shot. Expect more, with the targeting extending beyond Syrians, to anyone investing in projects that will enrich Assad and further entrench the devastation he has wrought.

Howard J. Shatz is a senior economist at the nonprofit, nonpartisan RAND Corporation and a professor at the Pardee RAND Graduate School.

This commentary originally appeared on RealClearDefense on July 22, 2020. Commentary gives RAND researchers a platform to convey insights based on their professional expertise and often on their peer-reviewed research and analysis.