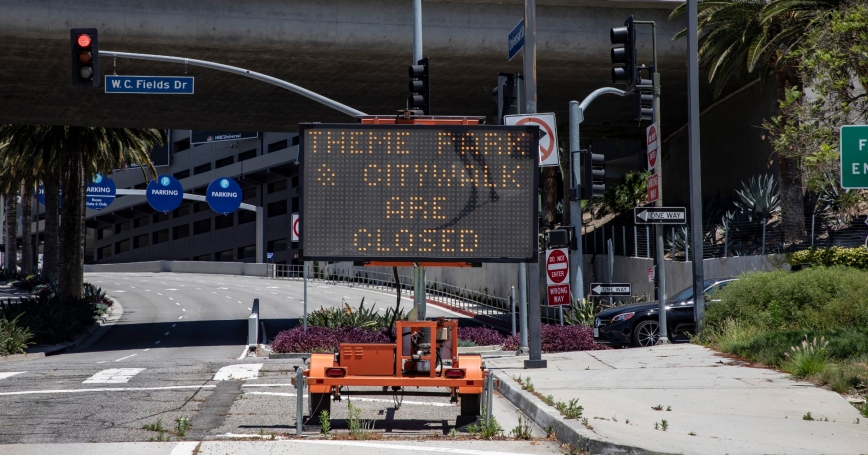 Universal Studios and CityWalk are closed due to COVID-19 concerns in Hollywood, California, May 14, 2020

More than 270,000 job cuts in the Los Angeles Combined Statistical Area (PDF), comprising Los Angeles, Orange, Riverside, San Bernardino, and Ventura counties have been reported to the state between March and early August. This number is almost certainly an undercount, because reporting is mandatory only for companies with more than 100 workers and the state has temporarily suspended some reporting requirements.

By considering which industries have cut jobs, these data provide a window into the area's unique labor market and may help explain how the area currently has among the highest unemployment in the nation. Using more than 39,000 job cut notifications from a four-week period during the unprecedented initial wave of layoffs and furloughs, I calculated the percentage of lost jobs in seven broad industry groups: film and television production; live events, which includes concerts, sporting events, and theme parks; dining and hospitality; retail; personal services, including real estate and travel; manufacturing; and all others.

Nearly 16 percent of 39,102 jobs cut were in the film, television, and music industries. A single temporary layoff event at Fox Sports Productions affected more than 3,500 employees. Another 15 percent of jobs related to live concerts, sporting events, and theme parks were cut over this same period, including the temporary layoff of over 3,000 employees of Universal Studios Hollywood theme park and more than 1,000 at the Music Center in downtown Los Angeles. IATSE, the union that represents many workers in live and recorded entertainment, reported that as many as 120,000 of its 150,000 area members experienced job losses in the first wave of mass layoffs and furloughs in early March.

Figure 2 shows monthly job cuts in the LA CSA over the period of the pandemic according to whether these cuts were initially reported to be permanent or temporary. Despite the vast majority of these job cuts—around 85 percent—being classified as temporary layoffs, the film/television and live event sectors are “phase 4” industries, and many of these jobs are unlikely to return until the rate of coronavirus transmission is near zero, due to their dependence on either large audiences or, in the case of many film and TV productions, large crews of workers.

Even in a post-COVID-19 world, these sectors may suffer longer-term employment consequences related to more permanent adaptations by producers and artists. The June–July spike in COVID-19 cases largely scuttled plans for local film and television productions to restart, and many productions are looking abroad for shooting locations where the virus has been effectively controlled.

The need to reduce the risk of COVID-19 transmission also could accelerate the use of virtual sets on sound stages rather than more involved location shoots. Film LA says applications for local film permits were about one-third their regular level from mid-June to early August—and most of those were for commercials. The sparse crews and increasing reliance on motorized cameras now being used for sports broadcasts may also portend permanent job losses. Finally, recording artists have been rapidly adapting to delivering live music performances directly to fans online, which may permanently affect employment in the $26 billion per year concert industry.

Other industries may also be facing many more permanent job losses than were initially envisioned by employers. A recent national Yelp report noted that for 60 percent of restaurants and nearly 50 percent of retailers, their temporary pandemic closures have become permanent. These two sectors account for roughly 30 percent of total local job cuts in Figure 1 above.

Entertainment jobs are particularly vulnerable because the industry may be shut down the longest and some jobs may get automated out of existence in the meantime.

But as the pandemic drags on, more and more jobs will disappear for good. Entertainment jobs are particularly vulnerable because the industry may be shut down the longest and some jobs may get automated out of existence in the meantime.

There aren't many viable policy options currently on the table to revive jobs in these industries, either. With respect to film and television production, the costly battle between states to lure productions with tax credits may yield fewer dividends now that ways of producing and delivering entertainment are being permanently altered. Larger restaurant chains are more likely to have the resources to survive the pandemic but are also more likely to successfully obtain government aid, suggesting a difficult policy path to assist in regrowing the many thousands of mom-and-pop restaurants already lost.

On a more hopeful note, pent-up demand for the energy of large, in-person events and a strong desire to dine and drink outside the home again may be strong factors in economic recovery once a vaccine is widely available and having an impact. But the creative destruction wrought by the pandemic may, nonetheless, leave L.A.'s employment picture permanently changed.

Jason Ward is an associate economist at the nonprofit, nonpartisan RAND Corporation who studies labor market participation, education, health, and links between them.