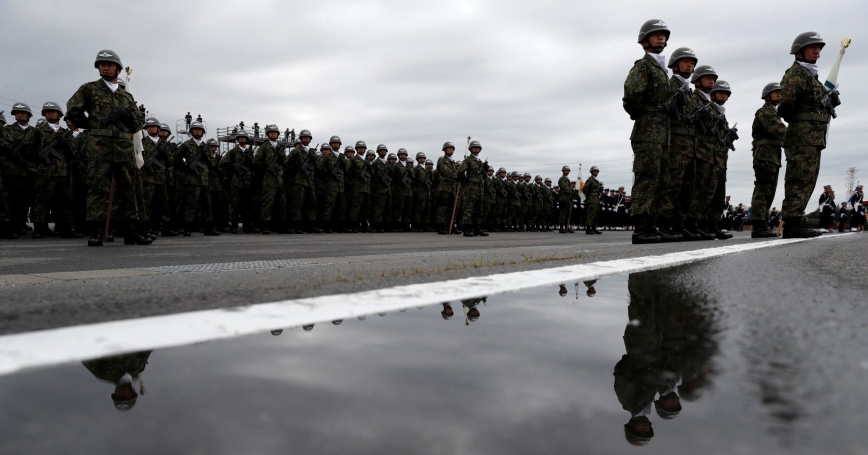 As Japan's pacifist principles do not permit the use of such offensive capabilities, there is even a discussion on what to call these options, including terms such as self-defense or enemy-base counterattack capabilities.

An alliance as close as that between the United States and Japan functions best with no surprises. While Japan's recent move has injected some uncertainty into the bilateral relationship—though nothing likely to bring about the end of the alliance—the decision to cancel something that had been in the works for several years before (PDF) President Donald Trump was elected and which the United States had identified (PDF) as being beneficial to its security interests, has left the alliance badly shaken. Japan's subsequent moves to discuss new deterrence capabilities has intensified the shock.

The debate over how Japan can defend itself is an important one, offering a major opportunity to shape the country's future defense posture.

The debate over how Japan can defend itself is an important one, offering a major opportunity to shape the country's future defense posture. While the ruling Liberal Democratic Party has recently submitted (PDF) proposals for consideration, public discussions have focused on the possible mix of defensive and offensive capabilities while glossing over more fundamental issues. Putting aside likely legal concerns and technological questions over the feasibility of tracking and targeting possibly mobile targets, three issues in particular deserve consideration.

The first is cost. One of the reasons Japan scrapped Aegis Ashore was because of how much extra investment would have been required to prevent booster rockets from falling on nearby residential areas. Still, does Tokyo think strike capabilities will be cheaper, now or in the future? While Japan does not currently have the capabilities it is debating, the cost of whichever system it finally decides on will likely be extremely high.

That's because acquiring time-sensitive target strike capabilities will not just require the development or procurement of new missiles. Supporting infrastructure to find, fix, and track adversary targets, as well as a robust suite of cyber, space, and electromagnetic tools will be needed to break down enemy defenses prior to launching any missiles.

These missiles and the infrastructure required to support them will place high demands on Japan's already tight defense budget, even if those costs are spread across multiple years. And because Japan is already trying to trim its defense budget in the wake of the COVID-19 crisis, defense budget pressures will only intensify.

Another issue is the strength of passive defense measures, which are measures that aim to minimize the effects of an enemy attack. Such measures help to prevent a regional adversary from a quick win by an aerial attack. While the entire debate around Japan's next steps has thus far focused on active defense measures, missing from the discussion is how strong Japan's passive measures are as part of a broader active denial strategy (PDF).

This includes hardening Self-Defense Force bases, ports and runways, as well as munition and fuel depots, and building greater resiliency into Japan's ground-based radar and communication networks by hardening landlines that connect sensors and radars, establishing second landlines, and building a strong mobile radar network in case land radars are destroyed. While critical, it is not clear how much Japan's Ministry of Defense has allocated to address these issues, beyond capabilities to perform rapid runway repair (PDF). Passive defense efforts may not be as "sexy" as missile systems, but they are important for a country focused on self-defense.

The final issue is how Japan's decision to cancel Aegis Ashore will affect the current roles and missions of the U.S.-Japan alliance. Often characterized as a shield and spear relationship, Japan is the shield protecting itself and the U.S. forces stationed there, while the United States is a spear poised to strike out beyond Japan to help shape the regional environment in a way conducive to both American and Japanese interests.

These roles and missions, constant since the formation of the alliance, are occasionally revised, albeit largely on the margins, with the last revision occurring in the 2015 mutual defense guidelines (PDF). Those revisions are also evident in the SDF's own capabilities, with strategic bombers, aircraft carriers and intercontinental ballistic missiles all specifically prohibited from Japan's arsenal. The SDF is also governed by laws and principles that keep Japan exclusively focused on defense.

The SDF is designed to delay and frustrate adversaries until more U.S. forces can arrive to augment those in Japan and put an end to any conflict. Japan's acquisition of strike capabilities would fundamentally alter the Japan-U.S. relationship. Not much thought has been given as yet as to how this would affect the two allies' roles and missions, force postures, and command and control structures, nor what the implications would be for the regional balance of power.

Where Japan ends up is its decision to make, but a broader discussion that includes issues of cost, passive defense measures, and changes in alliance roles and missions might help demonstrate that Tokyo is duly considering the full spectrum of possible issues associated with its debate over its deterrence capabilities.

This commentary originally appeared on Nikkei Asian Review on August 13, 2020. Commentary gives RAND researchers a platform to convey insights based on their professional expertise and often on their peer-reviewed research and analysis.