PTSD and Substance Use Disorders Are a Vicious Cycle for Veterans 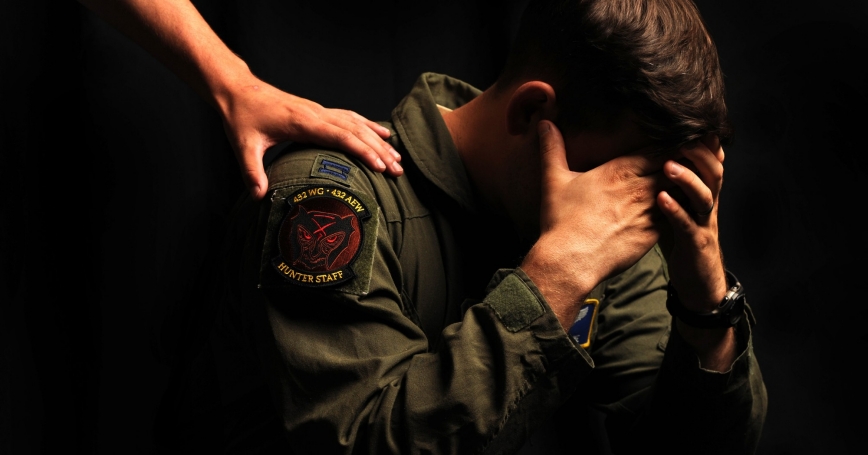 Post-Traumatic Stress Disorder (PTSD) is not a military or civilian issue, but rather a human issue. PTSD is a natural response to a traumatic event that people cannot process and cope with.

Although PTSD tends to affect military and veterans at higher levels of breadth and depth than their civilian counterparts, this is not due to a flaw or weakness among service members. Rather, increased rates of PTSD are associated with increased levels of exposure to potentially traumatic events, or PTEs.

Over the past two decades of war, individuals' combat tours became more frequent and longer in duration, which has the potential to increase service members' exposure to PTEs, and this has naturally and expectedly taken its toll on the mental health of America's active-duty and veteran communities.

As service members transition out of uniform, most experience additional transitional stress as they leave the military culture and learn to adapt to the norms and expectations of the civilian world. Many also report difficulties adjusting to family life after prolonged separation and especially after experiencing significant trauma.

Returning service members must overcome deeply held societal stigmas in seeking mental health care, both in processing their feelings (for example, the belief that what they are feeling is a sign of weakness) and their perceptions that others may perceive them as weak (for example, the belief that peers will view them as weak). Service members must also navigate a new and unfamiliar mental health care system. In many cases, those hurdles may feel insurmountable and, without care, their symptoms become worse.

Despite progress in recent years, lack of access to quality behavioral health care, combined with the stigma many service members feel when asking for help, leads many to seek more immediate and readily available methods of coping. Unfortunately, one of the most readily available is the use of substances, like alcohol or marijuana.

That may seem foreign, but let us challenge this perception. Why do we find it more acceptable for someone to purchase alcohol than to seek out mental health care? Think about it: When was the last time you noticed someone purchasing alcohol at the grocery store? When individuals go to a mental health appointment, they may feel like they are on display in the waiting room—especially veterans, who tend to get care at facilities that loudly announce they are providing mental health treatment.

That sense of being on display may not be present when purchasing alcohol. Self-medication typically creates a downward spiral as the abuse of alcohol and drugs leads to more negative feelings and increased levels of tolerance, which require higher dosages to achieve desired effects.

Alcohol is not the only substance used by veterans and civilians. However, alcohol is the most readily available and the most likely to be abused.

46% percent of individuals with lifetime PTSD also met criteria for Substance Use Disorder.

It is not uncommon to see a co-occurrence of PTSD and heavy use of substances, which can rise to the level of a substance use disorder, or SUD, when a person's functioning is impaired. Studies have shown that 46% percent of individuals with lifetime PTSD also met criteria for SUD. A substantial number of veterans with PTSD have met the diagnostic criteria for SUD at some point. Similar findings may be seen in civilians who have survived traumatic events, such as natural disasters.

By labeling PTSD and SUD as co-occurring, it may appear that these two diagnoses are isolated and acting separately within an individual. The truth is that they are often intertwined and, while PTSD may have brought about SUD (or vice-versa), trying to separate PTSD from SUD is quite difficult.

Our recent partnered research study demonstrated that these conditions cannot be separated as they both simultaneously affect the functioning of the individual, family and society. Based on these findings, our position is that PTSD and SUD need to be addressed simultaneously. This is a significant departure from the norm, as most PTSD treatment centers require patients to be drug-free prior to admission. While some individuals may require acute care, such as detox, for their substance use, the goal of treatment should be to impact both sets of symptoms. We believe when SUD and PTSD are treated in series, instead of simultaneously, symptoms of both may increase.

PTSD and SUD need to be addressed simultaneously.

Simultaneously treating PTSD and SUD is a challenge, especially within the traditional behavioral health landscape that isolates and separately treats the two conditions. The majority of SUD treatment facilities are separate from PTSD treatment programs. When both are offered, they typically exist in separate tracks that are completely independent of one another. The goal for treatment should be to address underlying causes, not merely symptoms, and when you begin addressing trauma during treatment, traumatic memories may worsen for some time, which may also increase the use of substances for self-medicating/soothing. This may also impact completion rates and the number of relapses.

Our work demonstrates that separating treatment for these two conditions not only impacts the delivery of treatment and functioning but makes an already complicated mental health resource landscape even more complex and challenging for veterans to navigate. It may be necessary to challenge how the needs of veterans are addressed to remove barriers to care that make treating these co-occurring disorders simultaneously so difficult.

This commentary originally appeared on Military.com on September 14, 2020. Commentary gives RAND researchers a platform to convey insights based on their professional expertise and often on their peer-reviewed research and analysis.