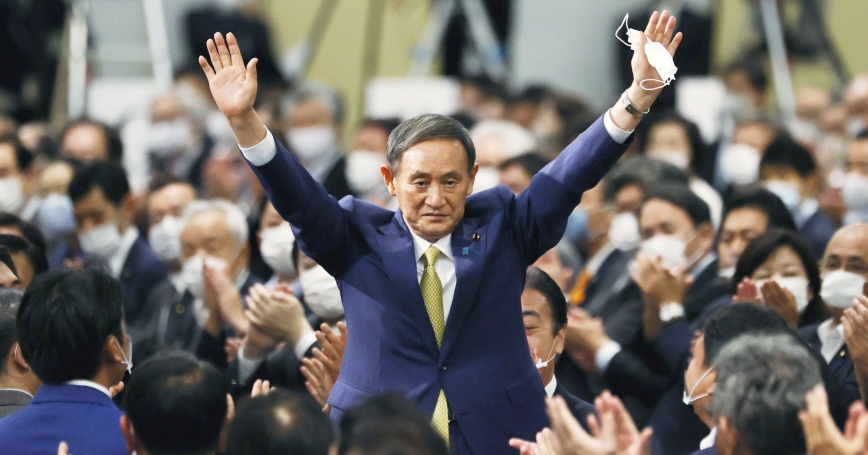 Japanese Chief Cabinet Secretary Yoshihide Suga gestures as he is elected as new head of Japan's ruling party paving the way for him to replace Prime Minister Shinzo Abe, in Tokyo, Japan, September 14, 2020

During Prime Minister Shinzo Abe's resignation announcement, he apologized for leaving many of his policies unfinished. Abe pushed to revise the constitution, negotiate a peace treaty with Russia, and secure the return of Japanese citizens abducted decades ago by North Korea. None of these materialized. If the next prime minister chooses to continue Abe's policies, would they pursue these unfinished policies?

Maybe not, but that is not to say they are unimportant. Importantly, if someone as powerful as Abe could not succeed in these initiatives, there is little hope his successor will, particularly if we assume he will come into office with limited political capital.

The first issue is successful management of U.S.-Japan relations. This may seem easy, given the strong bonds of the alliance, but recent trends between America and its allies show the task can be quite challenging. This is particularly the case given the Trump administration's demand for drastic increases in alliance contributions. Alliances do not like surprises, and while there have been plenty over the past eight years emanating from both sides of the Pacific, Abe blunted the thrust of some of the sharper surprises due to his personal relationship with Trump. His successor will likely not have that close friendship with Trump or Joe Biden, should Trump lose. Handling American criticisms or demands for greater contributions may be a difficult test that will require the full attention of Abe's successor.

Handling American criticisms or demands for greater contributions may be a difficult test that will require the full attention of Abe's successor.

The second issue is Japan's relations with China. History has shown that China takes advantages of periods of uncertainty and tests unproven leaders. Abe's resignation is likely viewed in Beijing as an opportunity to increase pressure on Tokyo to probe crisis response mechanisms, policy responses, and ability to withstand blunt Chinese provocations. Japan's next leader might therefore opt to maintain focus on China, both in Japan's defense policies and broader strategic outreach. This could mean not just continuing to increase Japan's defense budget, moving toward a Multi-Domain Defense Force, and pursuing a more robust defense posture and deterrent capabilities, but also continuing to strengthen Japan's security ties with other important actors including Australia, India, UK, France, and others. It also could mean continuing to strongly advocate a free and open Indo-Pacific. Abe's successor does not have to be a globetrotter like Abe, but he may need to ensure consistency and international presence to continue to counter Chinese influence.

Finally, Abe's successor could keep a focus on the Korean Peninsula. Bilateral ties with both Koreas remain frozen. Those with the North are understandable, given its authoritarian nature and strategy of driving wedges between U.S. allies, but those with the South are not. It is easy to forget, but Abe devoted considerable political capital to reach a settlement with South Korea on comfort women. While South Korea pulled the plug on that, other issues have arisen to worsen ties, but neither side appears willing to try to stop this trend. Japan's next leader might opt to find the political courage to make painful compromises with Seoul to stop the cycle of fighting historical battles in the present. This would require a good faith effort by leadership in Seoul to not move the goalposts on what is considered a resolution. The security of Japan and South Korea are intertwined. Working together, Japan and South Korea could pool their efforts and coordinate unified responses to handle the ongoing threats from North Korea. Taking advantage of a new administration, Abe's successor could begin the hard work of rebooting Japan's policies for the Peninsula.

Japan's next leader will likely want to capitalize on Abe's policy achievements. There may be more to be had by leveraging those areas where Abe had success with strengthening ties with the United States and countering Chinese provocations and influence than trying to complete his unfinished business. And finding an olive branch to extend to South Korea could also help the next prime minister reboot Japan's policies vis-à-vis the Peninsula. How much time and political capital Abe's successor has may be the determining factors for how successful he will be in these endeavors.

A version of this commentary originally appeared on Asahi Shimbun on September 14, 2020.