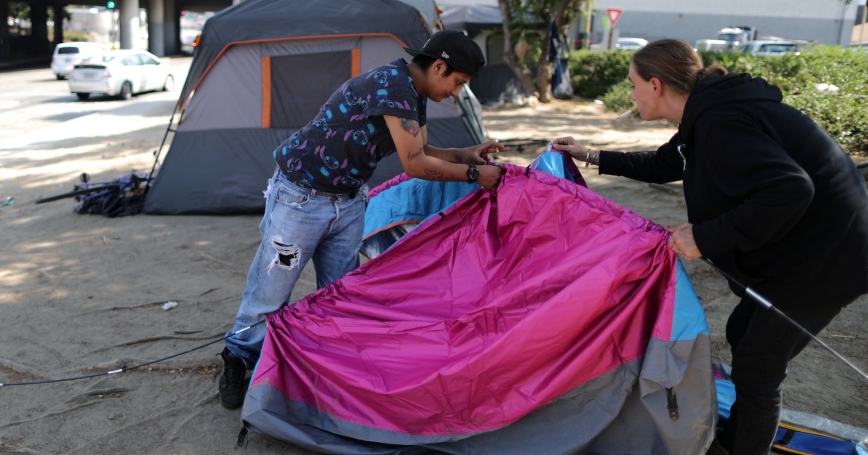 Christina Bojorquez and Kimberly Decoursey pitch a tent in their encampment next to a freeway in Los Angeles, California, October 14, 2019

Homelessness is a critical issue in Los Angeles County, but there is one particularly vulnerable homeless subgroup that has historically not been recognized: unaccompanied women. Recently, the county has created homeless subpopulations in the official homeless count to help policymakers provide tailored services and allot resources to individuals without housing. Existing subpopulations include veterans, families, single mothers, and unaccompanied youth, and as of September 2020, unaccompanied homeless women are now included.

Unaccompanied homeless women are defined as single women who are not caring for children or other dependents. These women are more likely to be chronically homeless, to have mental illness (PDF), to have specific work limitations, and are generally older than other subgroups. Homelessness does not affect all groups equally, as one recent report found that homeless women are dying at a rate higher than male counterparts. Additionally, homelessness is often inextricably tied to race, as Black people in particular make up a significant portion of homeless deaths despite being less than 10 percent of the total population. Because of the unique characteristics and challenges to finding stable work and housing for this group, it is not surprising that homeless, single women have different barriers to housing than homeless women with children or homeless single men. However, the lack of acknowledgement of this group as a subpopulation has not allowed for a deeper understanding of the issues that plague this group.

The LA County ruling may bring attention to a previously overlooked homeless population with unique needs.

Because unaccompanied homeless women have not been acknowledged as a subpopulation, assessments neither reflect the actual number of individuals in this group, nor do they call to light the specific needs of these individuals. Recently, a major step forward for this group occurred as an LA County ruling (PDF) has acknowledged unaccompanied homeless women as their own unique subpopulation. LA County is only the second U.S. county to acknowledge unaccompanied homeless women as their own independent subgroup. San Bernardino, which was the first county to recognize the subgroup, has helped to showcase some of the demographic breakdown (PDF) of this group. Still, little has been done to identify the specific needs of this group, and money has not been allocated to help these women. In addition to the ruling, a needs assessment will be conducted which could reveal the specific areas where this group requires particular assistance.

The roll out of this assessment in the coming months could present a unique opportunity to capture the challenges that COVID-19 have placed on this group. For example, the Women in Need (WIN) group in New York City has reported that finding stable housing for unaccompanied women is difficult because landlords will not show them apartments during this time. Understanding these particular issues may help policymakers and other women's groups in LA County to understand the challenges unaccompanied homeless women face and could assist this group in the event of other local or national crises in the future.

Given that LA County is the first group to take such a close look at unaccompanied homeless women, their findings may be instrumental in allocating resources to address the unique needs of this group. A follow-up assessment should also consider whether the designation of this group did in fact result in an increase in resources to this vulnerable population. With this ruling, LA County could be a forerunner of success and could establish a path for many other counties to get this group needed resources, to attain stable housing, and to help remove these women from a perilous lifestyle associated with being a single, homeless woman.