Will Thanksgiving Be a National Super-Spreader Event? 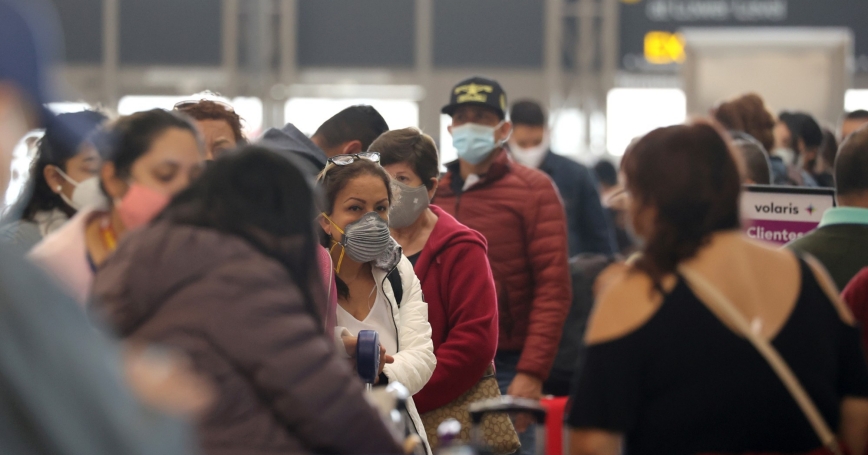 Passengers wait to check in at LAX airport in Los Angeles, California, November 23, 2020

The Centers for Disease Control and Prevention has recommended celebrating Thanksgiving at home with only those living in your immediate household. But the Transportation Security Agency reported that the number of travelers flying is up since Friday, though still about half of last year's record-breaking rates.

So Thanksgiving has not been canceled. The looming question is whether it will become a national super-spreader event. The risk will depend on the size of individual holiday gatherings across the country and the rate of COVID-19 cases in each community. Depending on what happens, we would expect to see any deadly fallout by Christmas and New Year's.

If we assume an individual's risk is based on the rate of COVID-19 in the broader community, we can use a binomial distribution (PDF) to estimate how likely it is that a Thanksgiving gathering might have an infectious guest. For small gatherings, of say 10 people, in a state with a relatively low rate of infection (10 per 100,000), we would expect at least one infectious individual at one in 20 gatherings. This would include only a few states: Vermont, Maine, and Hawaii.

In most of the center of the country, at least half of gatherings of 15 people or more can expect to have at least one person infected with COVID-19 attending.

Not surprisingly, the risk of encountering infectious individuals rises if you are celebrating your Thanksgiving in a state with a higher rate of infection (let's say, 50 per 100,000). In such states, which include Arkansas, Connecticut, and West Virginia, we would expect one in four gatherings of 10 people to have at least one infectious individual in attendance. The likelihood is yet higher for states in the Great Plains that have rates over 100 per 100,000. In states such as these, we would expect almost 45 percent of gatherings of 10 to have at least one infectious guest.

For larger gatherings the risk grows substantially as seen in Figure 1. Half of gatherings of 25 or more people can be expected to have at least one guest with COVID-19 if the local infection rate is above the national average of 50 cases per 100,000.

(All of the above are rough estimates assuming an individual's likelihood of being infectious is equivalent to the risk of the general population. A more precise risk estimate would require additional details. For example, some individuals will be at a higher risk because of their occupation or behavior. Alternatively, for gatherings that include only one or two households, the risk may be overstated because those individuals' exposures are correlated. Individuals should make risk assessments based on their particular situation and local prevalence of COVID-19 cases.)

The implications of this depends on where you live. Figure 2 is a map of the current case rates by state. Case rates are so high in most of the center of the country that at least half of gatherings of 15 people or more can expect to have at least one person infected with COVID-19 attending. The risks on the coasts are lower, but only in Hawaii would a 25-person gathering result in an average risk of exposure below 20 percent.

Having an infectious person at the table does not guarantee that everyone else will get COVID-19, but studies have found an estimated household transmission rate of about 50 percent. Asymptomatic and pre-symptomatic people play a major role in the spread of COVID-19, so just because everyone “feels okay” doesn't mean they aren't infected and contagious.

A high number of people seeking pre-Thanksgiving testing is thought to be straining the testing capacity even in states with robust testing infrastructure, such as Massachusetts. Although some people may feel reassured by a negative test early this week, such a result does not guarantee lack of contagiousness on Thanksgiving or beyond. A negative test is simply a snapshot of the person's infection status on that particular day, which may not be helpful given the virus's incubation period of up to 14 days. Even people who test negative must be sure to still wear masks and practice social distancing at gatherings.

While young and healthy people are generally at a lower risk of complications from COVID-19, they are not immune from poor outcomes and can experience long-term negative health effects. Older people and people with comorbidities such as obesity, heart disease, or diabetes have a very high risk for complications or death due to COVID-19.

We are currently experiencing almost 2,000 COVID deaths per day in the United States. That number could more than double by the end of December.

Ideally, only members who are already sharing a household will celebrate Thanksgiving together in person this year. Failing this, individuals should consider, at a minimum, following guidance from the CDC and taking steps, such as

In addition, anyone feeling even a little under the weather or who has been exposed to COVID-19 should stay home. The most vulnerable family members should join by videoconference like Zoom.

If Thanksgiving does become a nationwide super-spreader event, the first wave of symptoms will start to appear around Dec. 1. By mid-December, many of those new cases will need to be hospitalized. In some parts of the country, hospitals have already scaled back non-emergency operations, and soon other health systems—and staff—could be pushed to their limits. Deaths from COVID-19 will rapidly accelerate the week of Christmas—and if the health care system is strained, so might deaths from other causes. We are currently experiencing almost 2,000 COVID deaths per day in the United States. That number could more than double by the end of December.

Policymakers can seek to mitigate the effects of this nightmare scenario by pushing testing after Thanksgiving and limiting interstate travel. Targeted shutdowns could also be used to limit the Thanksgiving spread from having echoes throughout December. But no matter what, December will be a grim month if people don't stay home on Thanksgiving.

Carter C. Price is a senior mathematician at the nonprofit, nonpartisan RAND Corporation. Some of his major projects include modeling the impact of health care reform, assessments of terrorism risk models, and trends in economic inequality. He has also been providing analytic support for the Commonwealth of Virginia on COVID-19.