Women Are Leaving the Labor Force in Record Numbers 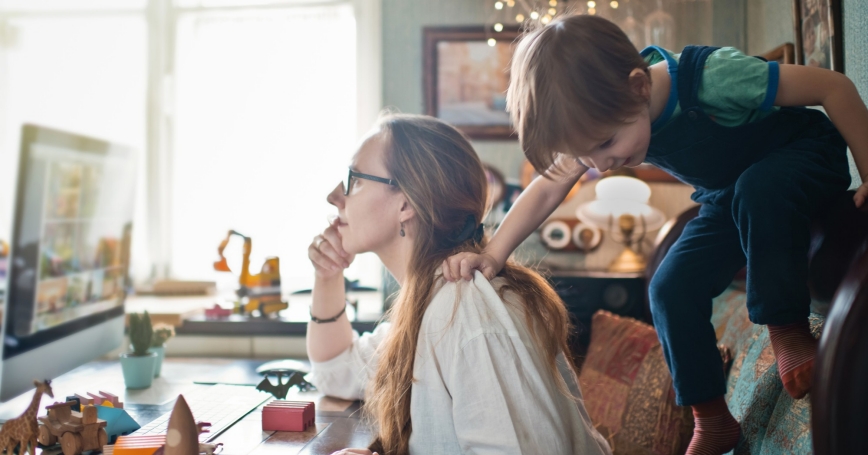 Claudia Goldin, former head of the American Economic Association, called the period beginning in the mid-1970s the quiet revolution (PDF) in women's labor. The ranks of female workers had grown steadily after World War II, but what changed drastically starting in the '70s, according to Goldin, wasn't the raw numbers, but mindset. Women made employment decisions for themselves, they pursued careers, and their work became part of their identity.

The COVID-19 pandemic, by any measure, has been a blow to that identity. Piled atop challenges such as pay disparities and expensive childcare is an economic downturn that hit women workers measurably harder than men—the so-called “she-cession.” One particularly sobering number: According to the U.S. Bureau of Labor Statistics, there were 2.2 million fewer women in the labor force in October 2020 than there were in October 2019.

Whenever the economy contracts people lose jobs and some workers, discouraged by the difficult labor market, sit it out for a while. (A person who is unemployed is still counted in the labor force until that person stops actively looking for work.)

But women aren't sitting it out so much as being shoved out by disproportionate job loss, shuttered schools, lack of childcare, pay disparities and lack of public policy to support working women. The unfinished policy work of the quiet revolution could not only leave women on the career sidelines for years, it could be a drag on economic recovery.

What Happened to the Labor Force in 2020

In January, before COVID-19 cases were detected in the United States, there were 30.1 million male and 29.1 million female workers age 18 to 55 who had at least one child in their households. (These are not necessarily their children, but children who live with them.) In the month of April, when the U.S. economy shed 22.5 million jobs, labor force participation cratered for both genders, but most of those losses were recovered over the summer.

Keep in mind, this is not showing people who have been laid off. This drop reflects only those who have stopped working or even looking for work. Women with children may hold slightly different types of jobs than those without, but probably not to a degree that explains this big gap.

The burden of caregiving, as many parents will tell you, also varies with the number of children and their ages. Are women with more children, or younger children, leaving the workforce in greater numbers? Between January and September, the largest net decline was among women with two children, down 3.8 points, and among women whose oldest child is 2 to 6 years old, down 5.6 points.

Some aspects of these changes align with what many sense to be true, that women whose children are at a more dependent age, for example, have had to drop out of the labor force to take care of them. Other findings don't confirm such intuition.

For instance, the decline in labor force participation is smaller for women with three or more children. Could it be that working with more children indicates a stronger commitment to work, a greater need for income (more mouths to feed), or that with three children, parents are more inclined to send them to in-person school and care? Or, notice that women with a child younger than 2 had higher labor force participation in September than in January. Could it be that working from home makes the return from maternity leave less difficult?

Regardless, if caregiving demands are pushing millions of women out of the workforce, this slide might not be over. COVID-19 cases are surging again. Some schools may have reopened, but before a vaccine and population inoculation, they could close again. It could take years for declines of this scale to be erased. Even when women's labor force participation was growing at its fastest clip, it rarely increased more than a percentage point a year.

Still at Work, but Stressed Out

For women who kept working throughout 2020, the picture looks no rosier. A Catalyst survey of adults ages 20 to 65 working in large companies (500 or more employees) found that 2 of every 5 mothers say they must hide their caregiving struggles from colleagues. A separate survey found that women with children are much more likely to report that working from home has hurt their productivity and affected their career. Although their sample is not representative of all women workers, a much larger survey from McKinsey (PDF) found that 1 in 4 women was considering taking a leave of absence, reducing hours, moving to part time, or switching to a less-demanding job.

Afraid to take time off, unable to take time off, working less, being promoted less—all of these will likely contribute to the predicted 5-point widening (PDF) in the gender earnings gap that will result from the recession. Women started the year earning 18 percent less than men, on average.

The Limits to Quiet Change

Goldin dubbed women's change in self-identity—from having a job for a while to having a career—a quiet revolution. A more fitting modifier might have been “unsupported.” That revolution was not ushered in by, nor did it usher in, public or corporate policies to support working women. Instead, women continue to be expected to improve their own situation.

For example, a well-documented reason for the gender pay gap is that women are much less likely (PDF) than men to negotiate their starting salary or ask for raises, citing that they feel uncomfortable and put on the spot. The solution? Women are advised to improve their negotiation skills and be more aggressive. But of course, not too aggressive, because women are also more likely than men to get penalized for negotiating (PDF).

Or, several studies note that mothers and fathers on average, even when both have full-time jobs, don't do an equal amount of housework or childcare. When women's so-called “second shift” was first measured in 1989, it was estimated women did 15 hours more per week than men; more recent estimates peg the average closer to five hours per week. The solution? Women are advised to make their husbands do more. Or they should lower their standards of what is sufficient housework, like giving up on ironing sheets.

By most measures, 2020 will end as a low point in women's labor market progress and one that makes starkly clear the limits of a quiet revolution. Women embracing their identity as workers will not make childcare less expensive. Women choosing careers they want will not stop sexual harassment. Women graduating from college at higher rates than men won't close the gender wage gap.

What might accomplish these things? If we've reached the limit of what the quiet revolution could do, what would a supported one look like?

Strengthening or expanding existing laws is a start. For instance, federal equal opportunity laws, in addition to forbidding discrimination in hiring, pay and promotion, could prohibit employers from asking about prior salary and wages, as nearly two dozen states have done. This has been shown to decrease the gender earnings gap.

Federal labor laws, in addition to setting a 40-hour work week and minimum wage, could require minimum shift scheduling notices. This is associated with longer job tenure for mothers. Further, the federal government could follow the lead of 10 states (PDF) and mandate a minimum number of sick days for all workers, part-time or full-time.

But truly transformational change rests on supporting caregivers. Working while rearing children from age 0 to 18 is difficult. The current solution is to tell households to fix how they split up that burden (and in effect, tell couples what their marriage should look like). But the government has the option to lighten the load.

After making it through a pandemic and recession that that stymied them, can working women get the investment they have long been forced to do without?

Let's start at age zero: employer-paid leave for new parents is currently available to just 17 percent of private sector workers. But a federal social insurance program for family leave would be portable across employers and states, and available to all wage earners. Similar to Social Security, workers who paid into such a program via taxes would receive benefits in qualifying circumstances, such as the birth of a child or the illness of a spouse, parent or child. Nine states (PDF) have set up smaller programs of this nature.

Likewise, free childcare (like a day care built next door to the public library or elementary school) for infants and toddlers, public preschool for ages 3 and 4, and school days that align with the workday (PDF) all have been shown to increase women's labor force participation.

The 30-year-old single man who has no children and never intends to has something to gain from such policies, too. When labor force participation increases, the economy grows. That's because 70 percent of the U.S. economy is based on household spending. When families lose an earner—through job loss or because one person decides to stay home—they are also decreasing their income. That may work best for their family, but it still shrinks the economy relative to what it could be.

Encouraging women to work is standard economic policy. The World Bank (PDF) has long advised low- and middle-income countries to invest in women through policies such as these to accelerate economic development; the International Monetary Fund has said (PDF) that investing in women is a recipe to grow the economy. The Council on Foreign Relations estimated that closing the gender employment and earnings gap could add $2.7 trillion to gross domestic product in the U.S. by 2025.

After making it through a pandemic and recession that that stymied them, can working women get the investment they have long been forced to do without? Only if the next revolution is much louder. But if it succeeds, we will all be better off.

Kathryn A. Edwards is an economist with the nonprofit, nonpartisan RAND Corporation.

This commentary originally appeared on Dallas Morning News on November 22, 2020. Commentary gives RAND researchers a platform to convey insights based on their professional expertise and often on their peer-reviewed research and analysis.