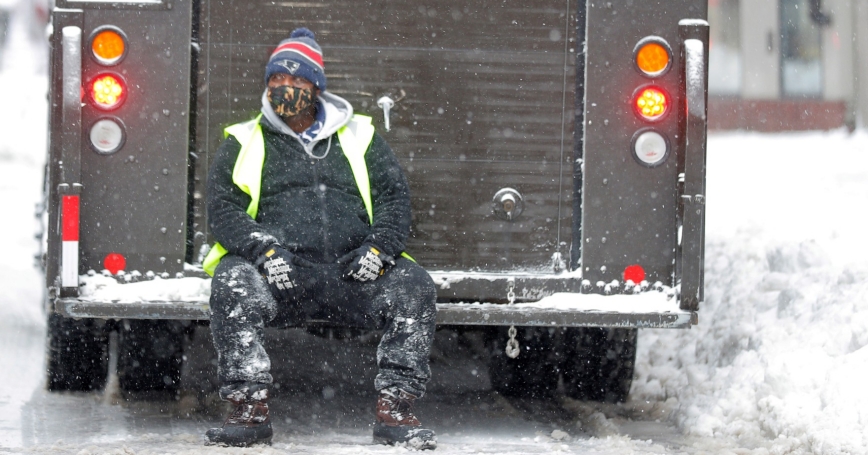 A worker sits on the back of a delivery truck during a snow storm in Boston, Massachusetts, December 17, 2020

Teleworking has increased tremendously in response to the COVID-19 pandemic. The ability to telework is associated with both reduced risk of infection and significantly lower risk of job loss. Recently released data from the Current Population Survey (CPS) sheds new light on how widespread telework has become and who is doing it. There are large disparities by race and ethnicity—but even larger ones by educational attainment.

The CPS data also allow us to examine the extent to which differences in educational attainment (PDF), which are associated with occupational differences, may contribute to the racial disparities in teleworking. For instance, we know that “information economy” jobs that easily shifted online—software development, finance, and mathematics—nearly all require post-secondary education. In addition, nearly all teaching jobs moved online, along with millions of legal, administrative, and managerial jobs. These occupations also disproportionately require a college degree.

Figure 2 presents these teleworking differences for all workers in a racial or ethnic group compared with those with a bachelor's degree or higher (again expressed as percent differences in the share of teleworkers versus the share of all workers). For example, white, non-Hispanics had a positive 11 percent gap as teleworkers as seen in Figure 1 above. But among those with a college degree, there is no difference.

These teleworking differences point to the outsize role education gaps may be playing in how COVID-19 is disproportionately harming communities of color.

Racial/ethnic disparities in teleworking are largely explained by differences in educational attainment.

First, workers without college degrees are primarily employed in service industries or other occupations that place workers at increased risk of infection (PDF). Even before the pandemic, research linked lower levels of educational attainment with higher levels of the common health conditions that increased the likelihood of complications from COVID-19 infection.

Second, there's a longer-term concern about the disruption of schooling (PDF), particularly how it is harming students from disadvantaged backgrounds. These costs to students may further aggravate the discrepancies in attainment of college degrees in the years ahead, and the positive association between educational attainment and health has been documented prior to the current pandemic.

With coronavirus cases and deaths reaching new highs by the day, a shift of public priorities toward in-person schooling—particularly for younger students—and away from keeping open non-essential businesses that put less-educated workers at risk could have a positive effect on both of these fronts. It remains to be seen when in 2021 the United States might flatten the curve of new cases and focus on returning students to school, but the ongoing teleworker disparities make plain the stakes of this trade-off between education and commerce.

Jason Ward is an associate economist at the nonprofit, nonpartisan RAND Corporation who studies labor markets, housing, education, and health.