Without Unemployment Benefits, How Might Americans Make Ends Meet? 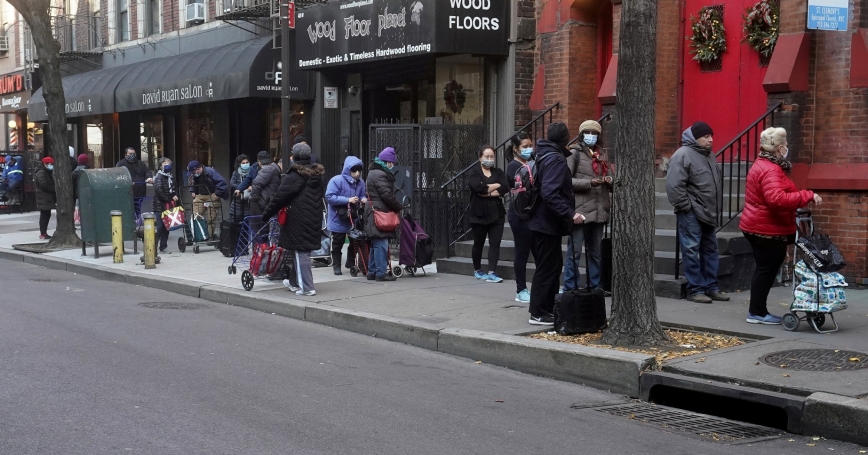 Do unemployment benefits keep people from accepting (PDF) jobs? What effect do they have on the economy? Researchers and policymakers have been debating these issues since COVID-19 led to widespread job losses last spring.

But there's another, more fundamental question to ask: Without unemployment benefits, how would people make ends meet?

It goes without saying that unemployed workers cut their spending and some strategically skip bill payments. Evidence suggests that many Americans don't have much cash savings as a cushion.

Borrowing is another option, but one only readily available to those with a strong credit history before becoming unemployed. A home equity line of credit, for instance, would only be available to those who were already homeowners. Research has found that if they have credit cards, unemployed workers will use those too.

The other source workers might turn to for money is their family. And while this may seem like the most obvious option, it's arguably the most problematic.

In my research, I found that unemployed workers often receive financial help from their families. But that help is very uneven. The probability of getting cash assistance from family increases with educational attainment; workers with a high school degree are less likely to receive cash from family than those with a college degree. Even among college grads, white workers get four times the relative cash assistance from family that Black workers do.

Although Unemployment Insurance has troubling racial disparities in benefits, those are nothing compared with the inequity of the informal private safety net available from family.

Unemployment Insurance is a program that is far from perfect. But it unequivocally reduces the hardship facing those who lose jobs.

Another form of financial help from family is “doubling up”—moving in with relatives. This strategy is more likely to be used by lower-income workers and workers of color, but it too is limited to those whose families have room for them. It also might not be a safe option during a pandemic.

Researchers who study the trajectory of unemployed workers believe that unemployment can be a turning point in inequality, a period in which racial differences get magnified largely as a result of differing levels of private resources available from family and personal networks.

Unemployed workers may prefer aid from family over a public benefit, and parents may be perfectly willing to offer it. But when the safety net is defined by one's parental wealth, that's a wedge for widening inequality. The richer your parents, the more economic security you have in a crisis.

By this logic, who has the least amount of relative support when they lose a job? Those who are upwardly mobile and who out-earn their parents. To see this, take two coworkers who were earning $60,000 a year but lost their jobs in a company layoff. One worker had parents who both work and each earn $100,000 a year, while the other only had one working parent who earns $25,000 a year. Both coworkers had the same thing happen to them, but are in very different situations.

Unemployment Insurance is a program that is far from perfect. But it unequivocally reduces the hardship facing those who lose jobs: More generous benefits are associated with smaller reductions in food consumption, fewer mortgage defaults, better health, and lower likelihood of poverty.

And Unemployment Insurance offers cash support that is based on what you earned—rather than what your parents can give.