A Bell That Can't Be Unrung: The CARES Act and Unemployment Insurance 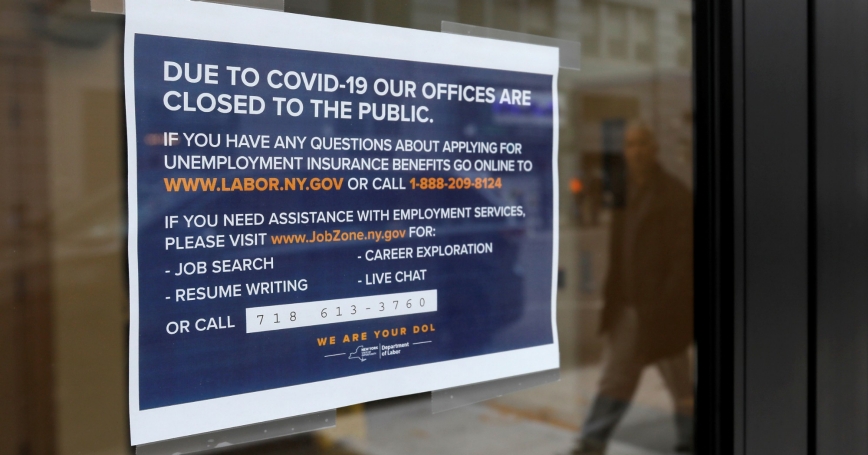 Signage posted on the entrance of the New York State Department of Labor offices in the Brooklyn borough of New York City, March 20, 2020

In every recession since 1957, Congress has intervened (PDF) in Unemployment Insurance to put off benefits' expiration date. But with the CARES Act, passed in March, Congress stepped into new territory. Congress increased the dollar amount of benefits and, for the first time, changed tax rates and covered additional groups of workers.

These provisions, even if they eventually expire some time in 2021, made stark the crucial ways that Unemployment Insurance is falling short for covered workers, workers not covered, and the employers who pay into it. Looking at the provisions one-by-one offers important lessons about how UI might be better prepared for future major economic disruption.

This federal program was created as a catch-all source of unemployment benefits for workers who were ineligible for regular (state-paid) benefits. That included workers who earned too little to qualify, or who were independent contractors, freelancers, or self-employed. At certain points during the summer, it was estimated that more workers were on PUA than were on regular benefits.

PUA was susceptible to delay, underpayment, overpayment, and fraud. And unlike low-wage or new workers who hadn't earned enough to be eligible, the self-employed and contractors have not had any employer contribute UI taxes. That also meant states had no earnings records on which to base benefits.

There was clearly a need for UI-type support for this growing segment of the workforce. Providing that long-term, however, is unlikely so long as independent workers are kept out of the tax system that funds Unemployment Insurance.

States, which through their legislatures design benefit formulas, had let the benefit amounts erode over time. In 15 states, for example, a typical high school graduate would not get half of their earnings replaced by a UI payment. But increasing benefit rates would have required 53 separate state programs to reformulate and recalculate their benefits, which brings its own political complications and practical roadblocks.

The $600 add-on expired, but we learned a lot from the four months it was in effect. Researchers from the University of Chicago estimated that the $600 kept individuals out of poverty (PDF). After it expired, despite a falling unemployment rate, poverty increased by nearly 8 million people.

Some states set unemployment benefits too low to support workers through a crisis, and there's no single lever to increase benefits as the economic situation dictates.

Some states set unemployment benefits too low to support workers through a crisis, and there's no single lever to increase benefits as the economic situation dictates.

This sounds like a minor technical fix, but it was arguably the most fundamental departure from UI as usual. UI is financed through a small per-worker tax on employers. If a business lays off workers, and those workers claim Unemployment Insurance benefits, that tax increases on all current and future employees. These tax rates were frozen during the pandemic—an incredible admission that UI financing has major flaws.

Tax incentives matter, and the heart of the incentive is whether the person paying the taxes is the one receiving the benefits, or is penalized for them.

The PPP was set up to provide loans to small employers with the condition that, if they used the money to prevent layoffs, the loans would be forgiven. Like PUA, PPP was dogged by issues of fraud, though this is not so surprising. Where money goes, fraud follows, and new programs have less institutional experience with program integrity. It's not clear how many workers were kept on staff—but estimates go as high as 51 million.

Individual unemployed workers need not be the sole target of intervention. There is also demand on the employer side for help to prevent layoffs.

So what might be the fixes, given the long history of failed reform? Can UI cover workers who don't have traditional employers, provide more generous benefits, help firms, and align the incentives of its tax financing scheme?

Individual unemployed workers need not be the sole target of intervention. There is also demand on the employer side for help to prevent layoffs.

One approach could be to split the program in two. State taxes and state trust funds could finance an employer benefit—something akin to a permanent, forward-financed PPP that increases access to workshare, or short-time compensation (PDF). This would give employers a source of risk protection for their payroll and allow states to respond to local economic conditions—not just downturns, but natural disasters or even extended construction projects that disrupt businesses.

If employers were covered by the states, individual workers could be covered by a new, federal social insurance program financed through a worker-paid tax (similar to FICA). This could help ensure that benefits only vary by prior earnings, not state generosity. Administratively, the Social Security Administration already runs three federal social insurance programs: Old Age Insurance, Survivors Insurance, and Disability Insurance. It also collects a tax on workers (regardless of whether they are employees, gig workers, contractors, or self-employed) to finance those benefits, and has over a thousand field offices to aid in administration and delivery.

The CARES Act was a bell that can't be unrung, broadcasting to everyone that Unemployment Insurance can do better by workers and employers. Congress can debate the hows of permanent reform, but its actions in 2020 proved the need.