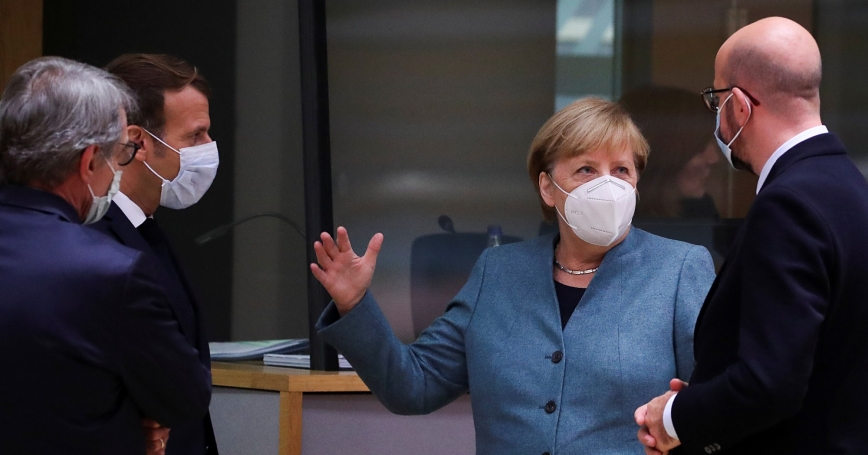 President Joe Biden's early foreign-policy agenda might include resetting America's relationship with Europe. Washington might specifically reconsider its stance toward the prospect of a Europe capable of what French President Emmanuel Macron refers to as strategic autonomy.

Washington has bristled at this notion in the past, viewing it as a threat to its influence and dominance, especially when the advocate for European autonomy is France. This could be a mistake. The Biden administration might do better to take seriously the prospect of Europe as a (potentially great) power, and welcome it.

The reasons for welcoming a strong European defense community are many. First, the United States cannot stand alone. It needs allies if it is to remain secure and prosperous in the face of hostile challenges from China, Russia, and a host of smaller nations including Iran and North Korea. The United States does already claim most EU member states as allies, but collectively they could be a lot stronger than they are individually. Moreover, the ally that the United States has relied on most for support on the international theater, the United Kingdom, is much diminished and likely will remain so. France is stronger, militarily at least. Germany is stronger economically, while militarily it is a sleeping giant. Other European countries also bring much to the table. Combined with the French and the Germans, they could project significant power, hard and soft.

A stronger and more independent Europe may take shape whether the United States likes it or not.

Second, a stronger and more independent Europe may take shape whether the United States likes it or not. The idea of a stronger Europe with greater strategic autonomy has been around since the late 1940s. It is unlikely to go away, and could finally gain real momentum. Brexit removed one obstacle to Europe's consolidation. Another is the large gulf separating French and German approaches to security, a distance created by differences in their strategic cultures and perspectives on the use of force. That gap may be narrowing.

Macron will stay in office until 2022. He has a good chance of being re-elected, and his challengers will probably be just as interested in pursuing strategic autonomy. German Chancellor Angela Merkel is set to leave office at the end of 2021. One should not expect her replacement to have the same approach to European security as Merkel or her predecessors. Europeans have more reason than ever to reach an agreement on their collective security. However much they welcome Biden's election as a return to the White House of an administration committed to NATO, the Trump experience has left some of them leery of relying on a security guarantee that depends on the caprice of a few thousand voters in Georgia and Pennsylvania.

American opposition to European strategic autonomy is quite a contradiction to perennial U.S. demands that Europeans shoulder a greater share of the burden of their collective defense.

American opposition to European strategic autonomy is also quite a contradiction to perennial U.S. demands that Europeans shoulder a greater share of the burden of their collective defense. The United States has always insisted that Europe spend more to be larger and more capable. Yet Washington doesn't want European capabilities to become so great as to encourage them to act independently. The truth is that Europeans already spend a lot on defense, but that spending is undercut by the redundancies and inefficiencies associated with so many countries building separate forces to serve separate political ends and nurture separate defense industries. The best remedy for that could be collectivization, or at the very least significantly greater coordination.

Macron's dream is no threat to the United States. It could be a big improvement on the current reality, where a bunch of allies punch well below their weight. In their weakness, these allies are more likely to strike separate bargains with America's real rivals. It became clear that this could happen with Macron's tentative and ultimately failed attempt last year at forging a friendlier relationship with Russia. Macron was motivated in part by the perception that the White House wasn't interested in standing with the Europeans against the Russians. Macron has no love for Putin, but he was not about to take any big risks by opposing him alone. A stronger Europe could.

This commentary originally appeared on RealClearWorld on January 21, 2021. Commentary gives RAND researchers a platform to convey insights based on their professional expertise and often on their peer-reviewed research and analysis.