What Does Vietnam Want from the United States in the South China Sea? 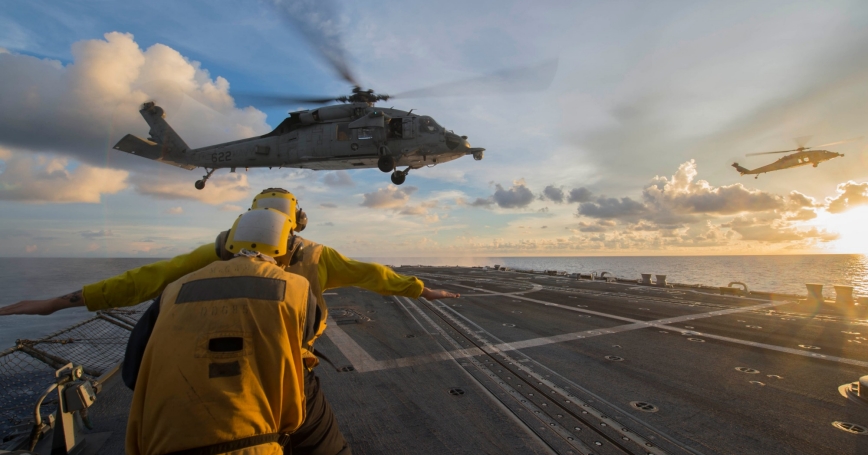 Sailors on the USS McCampbell signal to an MH-60S Sea Hawk helicopter during a training exercise in the South China Sea, July 22, 2016

As the incoming Biden administration formulates its South China Sea strategy, one regional partner that looms large is Vietnam. Over the last few years, tensions between China and Vietnam in the South China Sea have remained high, impacting fishing and natural resource exploration in disputed waters. While the Biden administration is likely to continue the positive momentum in bilateral ties, it is less clear what specifically Hanoi seeks from Washington to help it effectively deter Beijing.

This is wholly understandable. As I have recently examined at length in a RAND research report, Vietnam is doubling-down on its delicate balancing act as U.S.-China competition throughout the Indo-Pacific dramatically heats up. Although Hanoi feels compelled to counter China's bad behavior in the South China Sea, it also understands that its future is inextricably tied to peaceful relations with Beijing. Thus, Hanoi typically avoids publicly airing policy preferences, and even privately, the Vietnamese are notoriously subtle and difficult to read.

That leaves Washington in the dark most of the time. But through my research and discussions with Vietnamese interlocutors over the years, a few policy preferences have become apparent.

First, Vietnam was quite pleased with Secretary of State Mike Pompeo's statement on July 13 in which he announced the United States would not respect Beijing's maritime claims derived from disputed features in the Spratly Islands, Scarborough Shoal, Luconia Shoals, and Natuna Besar. Prior to that moment, Washington's policy of maintaining the integrity of maritime counterclaimants' exclusive economic zones (EEZs) over China's expansive “nine-dash line” claims had been an open secret, but Pompeo's announcement for the first time confirmed it. His statement coincided with the fourth anniversary of the Philippines' arbitration victory over China on their disputes, and Washington reaffirmed its support for this legal decision, which essentially invalidated Beijing's entire approach to sovereignty claims in the South China Sea.

Although Hanoi feels compelled to counter China's bad behavior in the South China Sea, it also understands that its future is inextricably tied to peaceful relations with Beijing.

Following Pompeo's announcement, Vietnam probably felt just a little more confident that the United States planned to support Hanoi in defending Spratly Island claims within its EEZ. Significantly, Washington specifically highlighted Vanguard Bank—the scene of the last major China-Vietnam standoff in 2019—as indisputably part of Vietnam's EEZ. A Biden administration decision to reiterate this policy stance would be greatly appreciated in Hanoi. But Vietnam certainly seeks more, particularly in the Paracel Islands where China in 1996 declared (PDF) straight baselines—i.e., internal Chinese waters between Paracel features—and in April extended administrative control over the Paracels (and Spratlys) from Sansha City on Woody Island, the largest island in the Paracels. If the Biden team issued a similar statement that refused to recognize Chinese sovereignty over the waters pertaining to the Paracel archipelago (and even better, the territory itself), then Hanoi would likely be overjoyed.

Second, as I have previously written in these pages, Vietnam has quietly endorsed the U.S. Indo-Pacific strategy because it takes a hard line against China in the South China Sea and suggests Washington's intent to sustain a presence in the region for years to come. Indeed, in one of my discussions with Vietnamese interlocutors, I was told in no uncertain terms that the United States cannot allow a repeat of China's 2012 takeover of Scarborough Shoal from the Philippines. Hence, if the Biden administration keeps the Indo-Pacific strategy (which it should), then it would likely signal to Hanoi that Washington strives to deter Beijing from undertaking such actions, and the United States will punish China for new transgressions.

To be sure, Vietnam's tacit support of the U.S. Indo-Pacific strategy comes with certain caveats. For example, it does not want to see U.S.-China relations become so adversarial that the dynamic forces Vietnam to choose between the two powers. Hanoi has also generally remained mum on the rising number of U.S. freedom of navigation operations (FONOPs) in the South China Sea. Although Vietnam supports challenging Chinese maritime claims under the auspices of the United Nations Convention for the Law of the Sea (UNCLOS) and in the interest of maintaining a rules-based order, Hanoi also does not wish to see FONOPs against waters surrounding territory it controls. Yet the United States occasionally does so. Going forward, Hanoi would rather see continued FONOPs focused on the Paracel Islands that make China less comfortable there.

Third, showing up for key regional fora is, as it has always been, at least half the battle in Southeast Asia. Unfortunately, the United States has quite a bit of work to do in this area. Over the last few years, the Trump administration sent insufficiently senior representation to the ASEAN Regional Forum and East Asia Summit, angering Southeast Asian leaders. Vietnam's chairmanship of ASEAN in 2020 was hampered by the pandemic, but Hanoi still managed to hold events virtually. But for the second year running, the Trump administration dispatched National Security Adviser Robert O'Brien to participate in the event—a clear slight to ASEAN leaders in attendance, especially when no travel was required.

If the Biden administration would like to improve its image in Vietnam, and the broader region for that matter, then sending high-level officials to attend these events—preferably the president himself—will be critical. While participating, the administration would be served well by reiterating Pompeo's statement on the South China Sea and going further on the Paracels, if possible. At a minimum, Hanoi expects that Washington will reemphasize its long-standing policy to uphold a norms- and rules-based order in the region.

Fourth, there are distinct opportunities for the United States to engage in security cooperation with Vietnam. To be sure, Hanoi's “Four No's and One Depend” defense policy—formerly and more commonly referred to as “Three No's” (no military alliances, no foreign bases on Vietnamese soil, and no working with a second against a third country)—is constraining, but there is certainly room for less provocative forms of cooperation. For example, the United States can support Vietnamese development of maritime domain awareness capabilities to help it better understand what China is doing in the South China Sea. Nontraditional forms of security cooperation, such as in the areas of humanitarian assistance and disaster relief (HA/DR) or search and rescue (SAR), enable bilateral exercises that, though not lethal, may still provide critical skill sets to the Vietnamese armed forces. Hanoi also welcomed procurement of additional coast guard capacity from Washington following the sale of ex-Hamilton-class coast guard cutters.

Hanoi is clearly leaving the door open to deepening security relations with the U.S., without specifically naming the U.S., if Chinese assertiveness continues to rise in the South China Sea.

Moreover, Vietnam's latest defense white paper, published (PDF) in November 2019, offers two additional points. The first is another “No,” which pledges never to initiate, or threaten to initiate, armed conflict. The “One Depend,” however, is quite relevant to the United States as it reads: “depending on the circumstances and specific conditions, Vietnam will consider developing necessary, appropriate defense and military relations with other countries.” Hanoi is clearly leaving the door open to deepening security relations with the United States, without specifically naming the United States, if Chinese assertiveness continues to rise in the South China Sea. Hence, the Biden administration may benefit from a Vietnam actively seeking greater cooperation in the future.

Finally, as the Biden administration takes the reins, it might want to consider re-engaging with Vietnam on upgrading the U.S.-Vietnam “comprehensive partnership” to a “strategic partnership.” Doing so would send a clear message to China that Vietnam has a strong backer in the United States, and probably unlock deeper security cooperation. As early as 2011, Vietnam floated the idea, but nothing has happened since then for unknown reasons. The Biden administration, however, will have a unique opportunity to discuss this possibility with new Vietnamese leaders following the Vietnamese Communist Party's 13th Party Congress, set to take place this month. Depending on who emerges from the Party Congress, they may possess the political capital needed to make such a decision.

Regardless, Vietnam is likely to increasingly look for support from the United States to help it push back against China in the South China Sea. The Biden administration should look to capitalize on these opportunities while coordinating its efforts across allies and partners—namely “like-minded partners” such as Australia, India, and Japan—that can complement U.S. assistance.

This commentary originally appeared on The Diplomat on January 4, 2021. Commentary gives RAND researchers a platform to convey insights based on their professional expertise and often on their peer-reviewed research and analysis.