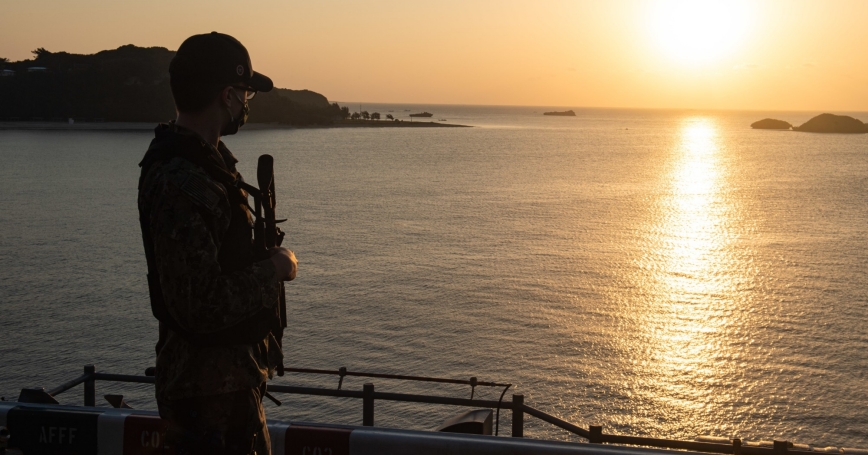 Unlike NATO allies or the Republic of Korea, U.S. relations with Japan did not suffer under the Trump administration. This is not to say there were not difficulties. Not only did President Trump impose steel and aluminum tariffs on Japan, he occasionally questioned the value of the alliance. He was also accused of trying to prod Japan into quadrupling the amount it pays to host U.S. forces. And pulling out of the Trans-Pacific Partnership disappointed Japan.

Yet, compared to the relentless criticisms that Trump launched at other allies, Japan fared well, with much due to Prime Minister Shinzo Abe's ability to manage relations with Trump. Japan's trust in the United States also did not appear to suffer under Trump. From 2016 to 2019, Cabinet Office polls showed that positive affinity toward the United States slipped only five points, from 84 percent to 79 percent, while the share of Japanese who felt that U.S.-Japan relations were good fell just seven points, from 87 percent to 80 percent.

Given these facts, the incoming Biden administration may not have to spend an inordinate amount of time “restoring” the relationship, but no doubt there is work to be done.

There will be challenges in synchronizing priorities given the likelihood that both Tokyo and Washington will be tempted to focus on domestic priorities.

Share on Twitter
Host nation support negotiations need to be concluded by March. And there are Japanese who remain convinced that a Democratic administration (PDF)—particularly a Biden administration—will be soft on China. There will also be challenges in synchronizing priorities given the likelihood that both Tokyo and Washington will be tempted to focus on domestic priorities. Collectively, these three areas may present the Biden administration with early priorities for the alliance.

The first is adept handling and completion of host nation support negotiations. Japan hosts roughly 54,000 U.S. military personnel at 78 bases (PDF), providing the United States with the ability to have continued forward-deployed, combat-ready forces in the Indo-Pacific region. Importantly, it pays for these forces. Although current figures are unknown, during October 2019 parliamentary debate, then-Prime Minister Abe said Japan's contributions offset between 72 and 78 percent of these costs. This is a tremendous amount. The Biden administration could approach these negotiations by signaling its understanding of the depth of these contributions.

This would mean acknowledging three major lines of effort of Japanese support to the U.S. presence in Japan. The largest is the cost for hosting U.S. forces. Calculated at roughly $3.8 billion in 2020 (PDF), the largest portion of this includes payments as part of a Special Measures Agreement in which Japan agrees to pay, among other things, base utilities, wages to base workers and the costs of construction of U.S. facilities on U.S. bases. A second line of effort is Japan's help to pay for U.S. force realignment related costs throughout Japan and abroad. Calculated at $1.7 billion in 2020 (PDF), this includes money to cover the costs for projects such as realignment in Okinawa and the relocation of U.S. Marines from Okinawa to Guam. The third, and smallest line of effort, are payments to cover costs associated with projects for land returns, training relocation, and noise reduction in Okinawa. In 2020, this stood at $132 million (PDF). Together, Japan pays for the majority of U.S. stationing costs. While the portion of Japanese contributions that is subject to negotiation with the United States is roughly $2 billion, instead of seeking large increases, the Biden administration could approach Japan about gradual increases in Japan's defense budget, or expansions in Japan's roles and missions. Both could benefit the alliance in the long-term.

The Biden administration could work next to allay fears about its position on China by continuing to upgrade U.S. relations with Taiwan and encouraging Japan to do the same. As democracies, there could be no limit as to how far U.S. relations can go with Taiwan. If the Biden administration wants to demonstrate a firm approach with China as a way to convince Japan of its commitment to allies, one way to do so could be by openly bolstering ties with Taiwan like the Trump administration. Before its departure, the Trump administration lifted all self-imposed restrictions on official interactions with Taiwan. Actions like these frustrate Beijing while sending strong messages to other states that may want to engage Taiwan more openly.

To alleviate possible trepidation in Tokyo over Washington's China policy, the Biden administration could work with Japan to show more visible support to Taiwan.

To alleviate possible trepidation in Tokyo over Washington's China policy, the Biden administration could work with Japan to show more visible support to Taiwan. Japan's engagement with Taiwan has flourished in recent years on a largely nongovernmental basis, and it may be an opportune time for Japan to do more. While relations during Abe's time in office strengthened, the appointment of his brother Nobuo Kishi as defense minister in the Suga administration sends positive signals to Taiwan given his known pro-Taiwan leanings. And in December, State Minister of Defense Yasuhide Nakayama urged Joe Biden to “be strong” in supporting Taiwan in the face of Chinese aggression, calling the island's safety a “red line” for Japan. Promoting more visible support of Taiwan would serve to ease anxieties in Japan regarding Biden's China policy while bolstering key relationships between these democratic neighbors.

Finally, it may be tempting for the Biden administration to focus internally. In addition to trying to bring the country together after a fractious election, it may also be tightly focused on the public health and economic issues associated with COVID-19. The Suga administration too is focused domestically, not only trying to manage the fallout of the pandemic, but also focusing on lowering mobile phone fees and digitizing government. As tempting as it may be for both leaders to focus domestically, their countries cannot afford inaction in the international arena at a time that China is exploiting others' weaknesses to push its foreign policy agenda.

Understanding that domestic priorities are real, the Biden administration can reduce the burden of its foreign policy initiatives by working with Suga to build on the momentum of Abe. Abe promised a more proactive Japan, and he delivered, strengthening ties with key U.S. allies and partners in Europe as well as other regional states. One of the manifestations of this is the Quad grouping that Japan organized with the United States, Australia, and India, as well as promoting a thickening web of security partnerships with key regional states. Most importantly, Abe provided a strategic framing of the region that has become the framing for regional countries. Termed a Free and Open Indo-Pacific (PDF), the concept focuses on promoting the rule of law, freedom of navigation, and free trade; pursuing economic prosperity; and a commitment to peace and stability. All of this could present the Biden administration with a playbook for what works to engage regional states on terms with which they feel comfortable. And working with Japan in this endeavor helps sustain the momentum of the past several years.

Japanese officials may be watching with bated breath as the Biden administration begins its term. Efforts to mend the country's political wounds, combating COVID-19 and the continuing deterioration of U.S.-China relations may dominate the agenda of the incoming Biden administration. But quick wins with Japan are possible and could be necessary to ensure the alliance begins on a positive footing so it can tackle more difficult challenges in the years ahead.

This commentary originally appeared on The Hill on January 25, 2021. Commentary gives RAND researchers a platform to convey insights based on their professional expertise and often on their peer-reviewed research and analysis.