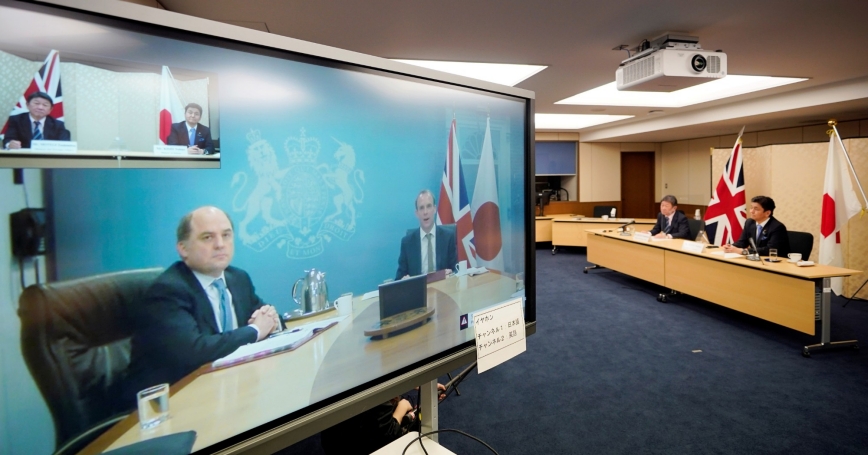 With Brexit behind it, Britain faces a question about what role it should play in the world. One of the issues that emerged during the Brexit debate was the need for Britain to remain a major power with an independent voice in the world by becoming “Global Britain,” suggesting an interest in remaining influential far from the British Isles. While the term itself has its critics, a debate rages over what it means for the UK's future.

The sentiment of wanting to retain influence on the world stage is understandable. Japan also enjoyed empire and great-power status. Unlike the UK, however, Japan never grappled with nostalgia for those days. Whether the fault of wartime defeat or recognition of the perils of empire, Japan has spent the last seven decades trying to escape those dark days and craft a new image as a middle power.

Assuming that Britain, like Japan, wants to remain a power that can shape—but not dominate—international relations in ways favorable to its national interests, it makes sense to reach out to like-minded states with which to partner. And Japan may offer just that.

Japan highly values the fact that the UK is a member of NATO and the Five Eyes intelligence network and enjoys a permanent seat on the U.N. Security Council.

Recent commentary has argued that Japan can help the UK meet the China challenge. And the UK has much to offer Japan. For example, Japan highly values the fact that the UK is a member of NATO and the Five Eyes intelligence network and enjoys a permanent seat on the U.N. Security Council.

The reality is the two countries have much to offer each other. (I recently authored a RAND Corporation report that examined, among other things, the deepening security ties between the UK and Japan, including how these ties benefit each other.)

Importantly, both countries are members of the G7 and possess modern armed forces, wielding significant economic power and military capabilities. Translating these aspects of power and prestige into influence, however, is not guaranteed.

Brexit, for example, could hurt British economic growth. Likewise, Japan's long-term demographic decline could slow Japanese economic growth. And COVID-19 means both countries have to focus domestically for the near term.

Yet, this is precisely why working together makes sense. At a time when both are preoccupied with domestic affairs and somewhat constrained in their ability to pursue their national interests abroad, cooperation is a cost-effective way to pursue international issues that matter to them. After all, the two countries champion similar agendas, such as multilateralism, environmental protection, and women's economic empowerment. They also command global convening power and have experience collaborating with others on foreign policy goals. Importantly, they both share an ally in the United States.

In his inaugural address, U.S. President Joe Biden promised to repair U.S. alliances and engage the world. If early signals are correct, the United States will want to work with its allies to oppose Chinese economic, military, and diplomatic influence. Countries like Japan and the UK could have an important role to play in this effort.

Both the UK and Japan are well suited in this endeavor given they have taken increasingly harder positions vis-à-vis China stemming from concerns of China's expanding influence and growing provocations.

Both countries have been shocked by the atrocities against the Uighurs in Xinjiang and efforts by the Chinese Communist Party to squash democracy in Hong Kong with the 2020 national security law that empowered Beijing to pursue unwarranted arrests of pro-democracy individuals.

Similarly, both countries have taken hard stances against allowing Huawei to play a role in developing their 5G networks. Not surprisingly, particularly since the onset of COVID-19, the Pew Research Center found that majorities in both countries—including a historic high in the UK—hold unfavorable views of China.

These common positions matter for the new U.S. administration seeking to re-engage traditional allies. Alignment on these key issues is imperative for cooperation on a broader China strategy. And greater cooperation can help strengthen an already thickening web of security cooperation among like-minded states. Even NATO is part of this effort, having identified the geopolitical challenge that China poses to Europe.

What is missing, however, is agreement on the broader strategy within which their China strategy will exist. Japan created and advocated its Free and Open Indo-Pacific concept, which the United States subsequently copied.

The UK, however, has yet to develop its own approach. While Boris Johnson remains focused on launching the D10, an alliance of democracies to counter China, crafting a strategy to guide the UK's efforts is absent. Without this, the purpose of the UK's Indo-Pacific engagement under Global Britain seems unclear.

Take, for example, the plan to deploy the HMS Queen Elizabeth aircraft-carrier to the region. Some may see it as a waste of resources when London should be focusing on a post-Brexit world. Yet, actions such as these—including passage through contested waters—serve as an important signaling device to China that a group of like-minded countries will not stand for maritime aggression and unilateral interpretations of international law that impinge on freedom of navigation and overflight.

No one country can successfully deter and counter Chinese actions by itself. But a coalition of like-minded states could find success. Japan and the UK, along with their U.S. ally, are one such dyad.

It could benefit the UK to avoid fears the country may be “sinking into an abyss of impertinence” and instead focus on cooperation with like-minded states like Japan to handle what could be shaping up to be this century's biggest security challenge.

This commentary originally appeared on Japan Times on February 17, 2021. Commentary gives RAND researchers a platform to convey insights based on their professional expertise and often on their peer-reviewed research and analysis.