Alexei Navalny Has Become a Profile in Courage. This Puts the Kremlin in a Quandary 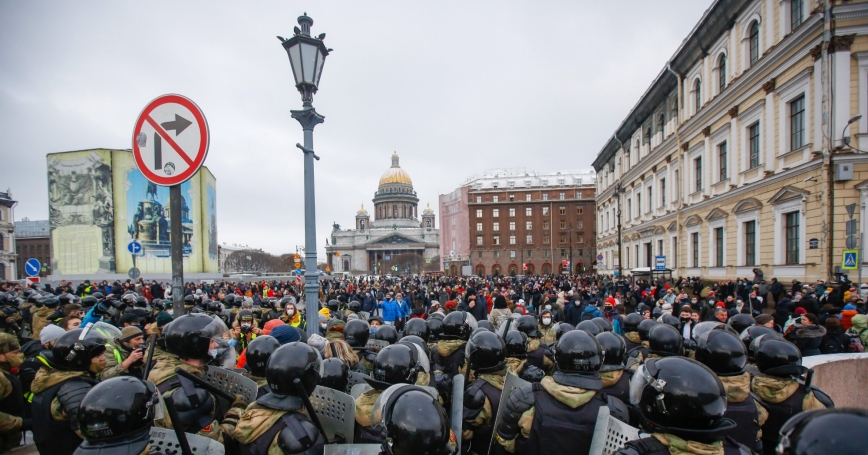 National guard block the street during a protest against the detention of the opposition leader Alexei Navalny in St. Petersburg, Russia, January 31, 2021

by William Courtney and Elina Treyger

Russian autocrats have sought to squelch political opponents since czarist times. Once again, the Kremlin appears to be opting for this time-honored strategy, adapted to modern times, in dealing with Alexei Navalny, the most prominent opposition leader in Russia.

Tens of thousands of protesters took to the streets Sunday for a second consecutive week to protest the arrest of Navalny and their country's increasingly authoritarian rule. More than 5,000 of them were reported as having been detained across Russia, including Navalny's wife, Yulia Navalnaya, and dozens of journalists.

Navalny was arrested Jan. 17 soon after returning to Russia from Berlin, where he had been recovering from being poisoned in Siberia with a Soviet-era nerve agent.

His latest detention is occurring at a time when popular dissatisfaction is rising in Russia due to declining living standards, rampant corruption and political stagnation. President Vladimir Putin has led Russia for more than 20 years, four of them as prime minister.

Navalny has become a profile in courage, and this puts the Kremlin in a quandary.

Prolonging his imprisonment, attempting to murder him—or actually succeeding—would only galvanize his supporters. And releasing him could be viewed as a victory for the opposition, making the Kremlin look weak.

Virtually any opposition figure in Russia of comparable prominence has been imprisoned, driven to exile, or killed. Mikhail Khodorkovsky, a former oil tycoon and potent Putin foe, spent a decade in prison before being released in 2013. Boris Nemtsov, a liberal reformer and Putin critic, was gunned down in Moscow in 2015.

Navalny's challenge is that Kremlin narratives win out among some Russians because most broadcast media are subservient to the regime.

Navalny has managed to elude both exile and death as his profile continues to rise. German Chancellor Angela Merkel visited him in the hospital in Berlin. And ahead of the Russian protests that began Jan. 23, he released a video purporting to document Putin's secret billion-dollar palace on the Black Sea coast; it has been viewed on YouTube over 100 million times.

The Kremlin may be worried about Navalny's potential to influence the elections to Russia's federal legislature, coming up in September. Putin's party, United Russia, may find it harder to sweep them. Although Navalny has been barred from running in presidential elections, his organization has been successful in helping to elect local non–United Russia candidates.

Ostensibly, Navalny is in custody because of alleged violations of parole terms while he was in Germany. On Thursday, a Russian court ordered he remain in jail. Another hearing is scheduled for Tuesday, where his earlier 3½-year suspended sentence could be converted to a prison term. Several other cases pending against him could result in significant prison time.

Thus far, Russian authorities are seeking to intimidate protesters by arresting record numbers of them, resorting to an array of laws adopted in recent years to restrict unsanctioned protests, complete with sharply increasing fines. They also seek to hobble Navalny's organization through political abuses of the law, beginning with searches and arrests of Navalny's family members and his associates.

Authorities have moved to restrict the channels Navalny and his associates use to disseminate information and organize actions. Russia's media watchdog, Roskomnadzor, has threatened major social-media companies with steep fines for failures to remove content that it contends solicits minors to participate in unsanctioned rallies.

Above all, Putin's regime seeks to entrench a less-than-credible narrative: that Navalny is a Western agent who staged his own poisoning.

Navalny's challenge is that Kremlin narratives have traction with many Russians. A December poll by the reputable Levada Center found that half of the Russian respondents believed Navalny was not poisoned or that the poisoning was stage-managed by Western intelligence services.

Kremlin narratives win out among some Russians, mainly older and more rural, because most broadcast media are subservient to the regime. Since the invasion of parts of Ukraine in 2014, even more Russian media have come under state domination.

The Kremlin is upping its pressure on U.S. broadcaster Radio Free Europe/Radio Liberty, one of the country's largest and most credible sources of independent online information. It could be forced out of Russia. More than 5 million people have watched its internet TV coverage of Navalny's return to Russia, which the primary TV channels did not cover.

Some experts say U.S. policy “must deal with Russia as it is.” This may make sense in negotiating arms accords, but not in dealing with malign actions. Western leaders have long spoken out about human rights abuses.

Biden may already be following in this tradition. In his first call with Putin, Biden raised concerns about the latest arrest of Navalny and called for his release. Biden's and Merkel's personal attention to Navalny could reduce the risk of another attempt on his life. Biden also could cooperate with European allies to bring even more attention to Navalny's repression, and Congress could condemn it.

In Russia, political earthquakes can come abruptly and unexpectedly. So it was with the failed putsch in 1991, the last straw for Soviet rule, an outcome few at the time predicted. Navalny may not have a following large or organized enough to pose a near-term threat to Putin's rule. But he still has time to marshal support and play a historic role in Russia's political fate.

William Courtney is an adjunct senior fellow at the nonprofit, nonpartisan RAND Corporation and a former U.S. ambassador to Kazakhstan, Georgia, and the U.S.-Soviet commission to implement the Threshold Test Ban Treaty. Elina Treyger is a political scientist at RAND.

This commentary originally appeared on Los Angeles Times on February 2, 2021. Commentary gives RAND researchers a platform to convey insights based on their professional expertise and often on their peer-reviewed research and analysis.