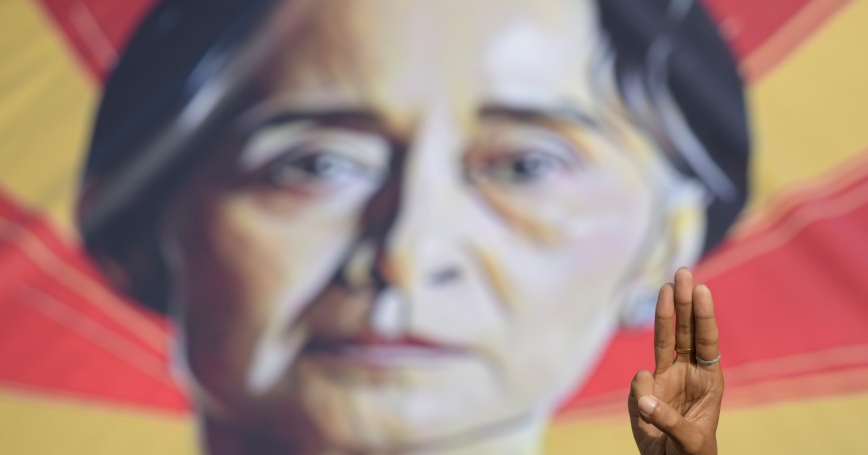 A person shows a three-finger salute in front of an image of Aung San Suu Kyi during a protest against the military coup, Yangon, Myanmar, February 15, 2021

The recent coup d'état in Myanmar is more evidence that democracy is indeed fragile. Myanmar is by no means what anyone would call a functioning democracy. But after several decades of military rule, there was a burgeoning hope that Myanmar was at least on the path towards increased political representation for its multiethnic population.

Just last November, the country held only its second truly contested election in decades—the result of which secured another win for the National League for Democracy (NLD). The NLD is led by Aung San Suu Kyi, the 1991 Nobel Peace Prize laureate who spent 15 years under house arrest before emerging as Myanmar’s de facto civilian leader five years ago.

While the 2020 election was hailed as a landslide, the latest coup in Myanmar—the most recent in a long history of military rule—is in many ways no surprise. The academic literature on coups and elections indicates as much. Several points merit mentioning.

Second, military leaders are generally reluctant to remove leaders and governments commanding high levels of popular support. Failed coup attempts can be costly and even have provoked civil wars. The most famous instantiation of which may be the Spanish Civil War, which began after General Francisco Franco’s failed coup attempt in 1936…

Sean Zeigler is a senior political scientist at the nonprofit, nonpartisan RAND Corporation.

This commentary originally appeared on The National Interest on February 14, 2021. Commentary gives RAND researchers a platform to convey insights based on their professional expertise and often on their peer-reviewed research and analysis.