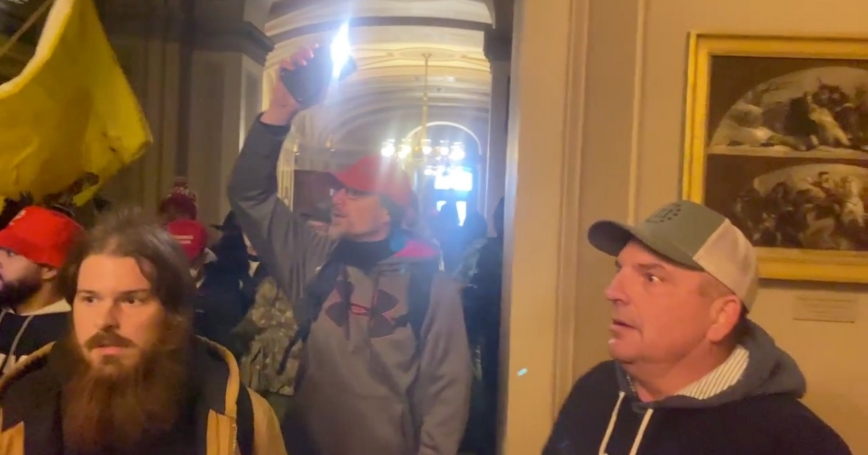 Supporters of U.S. President Trump storm the Capitol building in Washington, DC, January 6, 2021 in this screen grab obtained from a social media video

President Biden underscored the importance of the role of the Director of National Intelligence by nominating Avril Haines to that position as his first appointment to intelligence community leadership. From what we have seen through a review of senior positions under the DNI, Haines has acted quickly in restoring the role of intelligence as a valued input to national security policymaking by putting seasoned intelligence professionals into key jobs.

Now, Haines has an opportunity to advance intelligence community mission activities on several key issues shaped by the digital information age. One of these issues is the role of publicly available information in the performance of their missions.

The quantity, quality, and accessibility of publicly available information has exploded over the past decades. Private sector groups have made notable intelligence discoveries simply through exploiting this type of information. Examples include the forensic work done by Bellingcat to identify entities involved in the shoot down of Malaysian Airlines Flight MH17 over Ukraine; insights into North Korean nuclear and missile programs by 38North and the crowdsourcing of images used to substantiate claims of chemical attacks by the Assad regime against civilian neighborhoods.

On January 22, President Biden tasked the Office of the Director of National Intelligence to work with the Department of Homeland Security and the FBI to prepare “a comprehensive threat assessment” of domestic terrorism. The use of openly available information posted by participants in the attack on the Capitol will likely figure importantly in this assessment.

While there have been successful uses of openly available information in intelligence reporting, our research shows the community's investments in open source intelligence have been inconsistent, episodic, and imperfectly distributed.

The digital age places enormous volumes of information at the fingertips of any analyst. The challenge is how to make sense of it all and effectively communicate it to policymakers, law enforcement personnel, and warfighters to give them decision-advantage to seize an opportunity or prevent a threat. Further complicating the use of publicly available information are policy and procedures that have not kept pace with changes in technology and availability of data. For example, some members of Congress are legitimately concerned about privacy issues associated with exploiting this information, such as intelligence community elements purchasing data from commercial entities that may contain American citizen phone locational data.

Turning the potential volume of relevant data into meaningful insights requires a workforce trained in new collection and analytic methods.

Furthermore, turning the potential volume of relevant data into meaningful insights requires a workforce trained in new collection and analytic methods. Harnessing the power of artificial intelligence and other digital analytic means will help, but ultimately a person needs to render a judgment on the integrity of the information collected and validity of any insights it may offer.

She may find that it needs to be integrated into every element in the intelligence community; an intellectual and cultural change that will require strong central leadership, consistent investment and sustained effort—exactly the type of challenge that the Director of National Intelligence was established to address.

This commentary originally appeared on The Hill on March 3, 2021. Commentary gives RAND researchers a platform to convey insights based on their professional expertise and often on their peer-reviewed research and analysis.