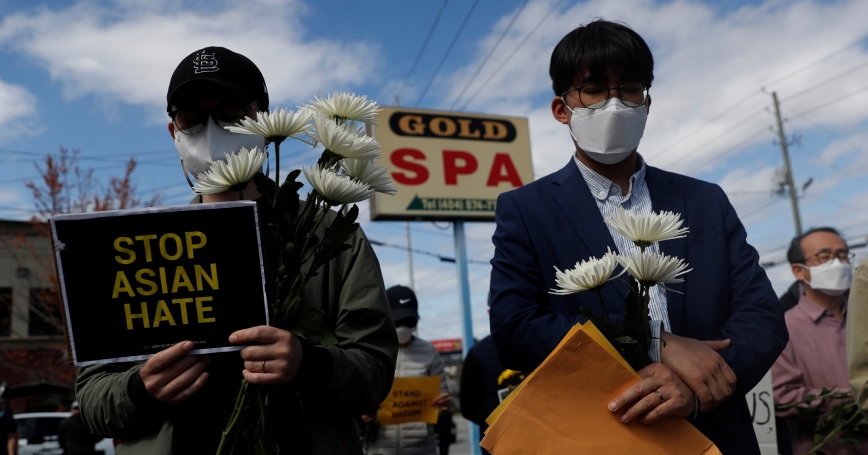 Men hold flowers during a vigil at a makeshift memorial outside the Gold Spa following the deadly shootings in Atlanta, Georgia, March 21, 2021

Shortly after eight people were murdered in and around Atlanta on March 16, a few key facts were widely reported: six of the eight victims were Asian American women, and the suspect denied race was a motive, blaming his “sex addiction.”

These facts make it possible for some to deny that racism played a role in the attacks, or that systemic racism against Asian Americans still exists in this country.

Others who have denounced this incident have cast it as merely the latest in a string of recent anti–Asian American hate crimes, and attribute the 150 percent increase (PDF) in reported violence and other harassment directed at Asian Americans to the COVID-19 pandemic.

But these attacks didn't suddenly appear out of nowhere. Racism against Asian Americans is deeply rooted in the history of the United States. Enduring stereotypes about and bias towards Asian Americans, as well as lack of concern about them, have had long-standing harm on Asian American lives and livelihoods. The devastating event that unfolded in Atlanta was a reminder that people act on those stereotypes, but that justice still behaves as though it “doesn't see color.”

Attacks on Asian Americans are rarely seen as racially motivated, rendering Asian Americans invisible and disqualifying them from the broader discourse on race and racial injustice. Proving a racial motive behind attacks on Asian Americans can be challenging, whether because of the absence of symbols of anti-Asian hate, such as a noose or a swastika, or the reluctance of victims to speak out due to language barriers or worries over their immigration status.

What's worse, engaging in speculation over the killer's motives in last week's murders shifts the focus away from the victims themselves, flattening them to familiar stereotypes, such as being fetishized as “exotic,” or that of an Asian sex worker. Stereotypes that reduce Asian Americans to a single transactional function, as something to be disposed of, also reinforce the conditional nature of Asian American value, with members of the Asian American community frequently ending up as pawns in policy debates over the COVID-19 pandemic, education, national security, and efforts to increase diversity, equity, and inclusion.

Whether or not the well-being of people of color happens to align with other interests shouldn't determine whether it matters at all. To hear some tell it, standing up against attacks on the Asian American community should matter only if it serves some purpose—for example, if it impedes the fight against the pandemic, because Asian Americans make up a disproportionate part of the health workforce, or because it may threaten national security by damaging the U.S. reputation abroad.

What can the Asian American community and its allies do?

Whether the well-being of people of color happens to align with other interests shouldn't determine whether it matters at all.

The three of us are Asian American researchers and in our lives have experienced, to varying degrees, Asian stereotypes, ranging from the “model minority” myth to the “yellow peril” myth, that pit us against other racial groups in a hierarchy of minorities, and target us for exclusion, denial of opportunities, and questionable loyalties. We must replace these myths with a better understanding of the ways in which the infrastructure of systemic racism has shaped racial dynamics in this country.

Those of us in policy institutions and academia should take advantage of this moment to amplify underreported issues in the Asian American community. These issues range from the dearth of official hate crime statistics, Black-Asian community relations, impact on ethnic enclaves such as Chinatowns, China-U.S. relations, and the surrounding context of COVID-19.

Focusing data on equity—as in recent calls for a federal equitable data working group—and expanding educational opportunities—both in schools and the workforce—are critical ways that policy research could make a positive difference. More granular data could better reflect the diverse histories and social circumstances among Asian American communities, and could help policymakers identify challenges and offer targeted solutions. States and educational systems could also continue integrating Asian American history into teachings. Businesses and nonprofits could offer professional development that helps people understand the magnitude and context of events such as the one that took place last week.

Many who would stand with the Asian American community, including President Biden, have spoken up to offer their support. But too often this amounts to just words, particularly when they invoke a separate justification for that support. Transactional arguments reinforce the notion that Asian Americans are not independently worthy of support absent some self-interested motive. Truly meaningful support would affirm our inherent value and humanity, freeing us from playing a part in someone else's movie.

If Asian Americans are to be truly seen as a diverse community rather than a monolith, as both a long-standing and constantly-refreshed part of the American story, support for our lives and livelihoods must be unconditional. This requires taking action that is specifically meant to benefit Asian Americans—no matter our population size, not just along the way of benefiting someone else.

Douglas Yeung is a behavioral scientist at the nonprofit, nonpartisan RAND Corporation and on the faculty of the Pardee RAND Graduate School. Peter Nguyen is a policy researcher at RAND. Regina Shih is the director of the Social and Behavioral Policy Program at RAND.