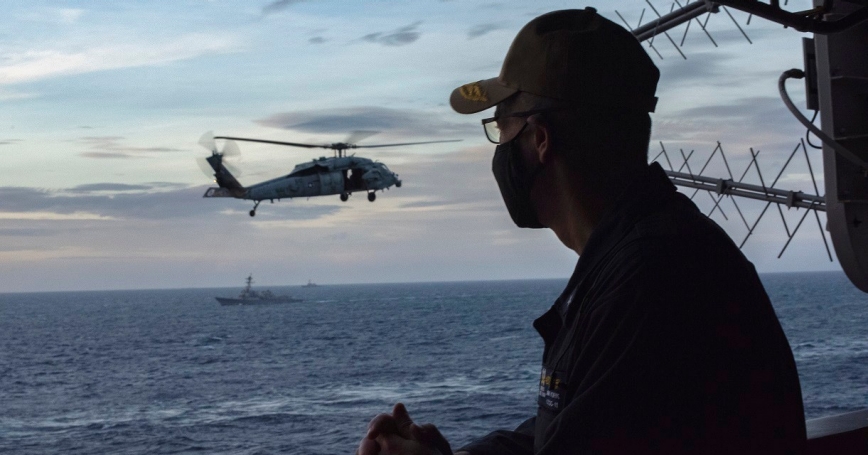 After four years of steadily strengthening U.S.-Vietnam security relations under the Trump administration, the presidential transition to Joe Biden naturally carries some measure of uncertainty for Hanoi. Early signs from the Biden administration, however, are extremely positive for Vietnam. It appears that the Biden team essentially plans to retain the Trump administration's Indo-Pacific strategy, aimed at keeping the region “free and open” from Chinese coercion, but with toned down rhetoric and additional emphasis on shoring up ties with allies and partners.

As I have argued previously, Vietnam, though it would not state so publicly to avoid unnecessarily antagonizing China, was an avid supporter of the Trump administration's Indo-Pacific strategy. Hanoi appreciated Washington's focus on the region, particularly on sovereignty disputes that pit it against Beijing in the South China Sea. Vietnam welcomed American support in the form of freedom of navigation operations (FONOPs) and official statements. During its short time in office, the Biden administration has already conducted three publicly disclosed FONOPs in the South China Sea in the vicinity of the Spratly Islands (twice) and the Paracel Islands. Moreover, Secretary of State Antony Blinken reaffirmed his predecessor Mike Pompeo's July 2020 shift in South China Sea policy to recognize the existence and legality of maritime counterclaimants' exclusive economic zones (EEZs) over China's “Nine-Dashed Line” claim, which is based on historical territorial rights in contravention of international law and norms of behavior.

Furthermore, it is clear that the Biden administration plans to continue the Trump administration's great power competition with China. This is a good thing for Hanoi because Washington is demonstrating a long-term resolve to push back against Chinese ambitions. In his major foreign policy speech delivered at the State Department on February 4, President Biden argued that China was a “serious competitor.” A few days later, he gave an interview to CBS' “Face the Nation” in which he described a state of “extreme competition” with China. And his entire administration has been in lockstep on China policy. For example, China has become the “pacing threat” for the Pentagon, and every office within Biden's National Security Council—whether technology, health, climate, etc.—is paying close attention to the national security implications of China's rise.

Finally, Hanoi can hang its hat on the Biden administration's recent decision to specifically name Vietnam as a key partner in the Indo-Pacific. In its “Interim National Security Strategic Guidance” released (PDF) on March 3, the Biden team noted that “We will…work alongside New Zealand, as well as Singapore, Vietnam, and other Association of Southeast Asian Nations (ASEAN) member states, to advance shared objectives.” It should be no surprise that Vietnam received a distinct and positive mention. At a recent event hosted by the University of Virginia, U.S. Ambassador Daniel Kritenbrink said, “I think our interests and our vision of the kind of region and world in which we want to live is almost completely aligned.”

But inevitably, there are numerous Vietnamese concerns that have attended the transition to Biden. First, as I have discussed elsewhere, the Biden administration appears to emphasize not only shared national interests, but values as well, such as democracy, freedom, and human rights. For Hanoi, there is likely a certain amount of trepidation regarding the potential consequences of engaging with a more vocal Washington on these issues, which are extremely sensitive for Vietnamese Communist Party (VCP) leaders. Additionally, Hanoi likely has concerns about whether the Biden administration will take action against Vietnam for Trump-era allegations that it is a currency-manipulator as well as potential U.S. sanctions against Vietnam for purchasing Russian military equipment under the Countering America's Adversaries Through Sanctions Act.

Hanoi can hang its hat on the Biden administration's recent decision to specifically name Vietnam as a key partner in the Indo-Pacific.

Also, in my recent discussions with a Vietnamese interlocutor, there are other brewing concerns. One is that Hanoi has been trying to secure a time for the VCP General Secretary Nguyen Phu Trong to visit the White House and meet with President Biden. The last and only time this happened was in July 2015, and so a summit is well overdue, and an inability for Hanoi to get one this year would be considered a setback. Second, following the Quad ministerial meeting in February, Washington's readout noticeably did not include a mention of the South China Sea issue—a worrying sign for Hanoi.

This, however, may have been ameliorated by the Biden administration's statement after the first-ever Quad summit on March 12. The statement read, “We will continue to prioritize the role of international law in the maritime domain, particularly as reflected in UNCLOS [United Nations Law on the Convention of the Law of the Sea], and facilitate collaboration, including in maritime security, to meet challenges to the rules-based maritime order in the East and South China Seas.” Finally, the Vietnamese interlocutor raised concerns that American and Chinese officials meeting in Anchorage, Alaska on March 18 might signal a “reset” in U.S.-China relations that could, in some way, negatively impact U.S.-Vietnam relations.

All of these challenges, however, are manageable given the significant and positive momentum of bilateral ties. Going forward, the Biden administration may seek to alleviate Vietnamese concerns raised here to further solidify Hanoi's support of the U.S. Indo-Pacific strategy. The Biden administration is already off to a strong start, but more can certainly be done, such as inviting General Secretary Trong for a visit to the White House. For its part, Vietnam might keep an open mind about the new administration and be willing to accept potential changes to Washington's approach over the next four years.

This commentary originally appeared on The Diplomat on March 16, 2021. Commentary gives RAND researchers a platform to convey insights based on their professional expertise and often on their peer-reviewed research and analysis.