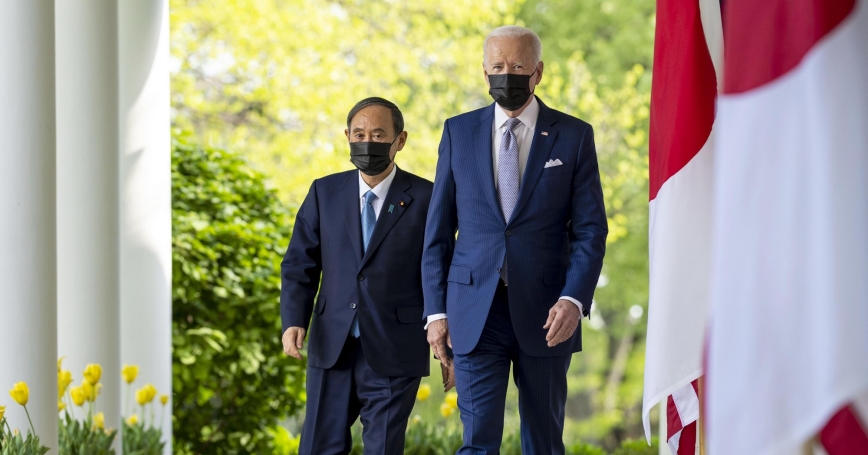 Prime Minister of Japan Yoshihide Suga and U.S. President Joe Biden walk on the Colonnade at the White House in Washington, D.C., April 16, 2021

On a cool and cloudy mid-April Friday morning, Japanese Prime Minister Suga Yoshihide touched down in Washington for the first in-person summit meeting of President Joe Biden's young administration. A few hours later, by the time the U.S. president and his Japanese counterpart stepped into the Rose Garden for a post-summit press availability, the weather had turned warmer, and Biden joked that “the prime minister's brought the sun out.” Indeed, as he made his remarks, Biden sought to channel the best of past Japan-U.S. leaders' relationships, quipping that “Yoshi, you'll probably be seeing a lot more of me.” While confronting the continuing problems of gun violence in the U.S. and a fourth wave of COVID-19 that may put the Tokyo Olympic Games at risk of cancellation, the two leaders sought to show that their democracies can rise to the moment on the international stage even as they manage difficult domestic challenges.

One of the central issues the two sides sought to address in their meeting was global warming, including coordination ahead of the virtual climate summit that Biden will convene on April 22–23. Japan, the world's third largest economy, has pledged to work toward net-zero greenhouse gas emissions by 2050 (PDF). The two leaders announced the launch of a U.S.-Japan Climate Partnership (PDF) to take “decisive action” by 2030 to advance an ambitious agenda on climate change, decarbonization, and clean energy.

They also likely discussed Japan's plans to proceed with ocean-based disposal of the 1.25 million tons of wastewater containing radioactive tritium from the destroyed Fukushima Daiichi nuclear power plant. While this move has attracted substantial negative commentary from China and South Korea, RAND research published in 2016 established that the radioactive wastewater from the facility represents a substantially greater threat if concentrated in one location, such as at the site of the reactor, than if diluted and distributed in the ocean where it poses minimal risk to human or animal health.

A U.S.-Japan Climate Partnership will take 'decisive action' by 2030 to advance an ambitious agenda on climate change, decarbonization, and clean energy.

A second issue the two sides addressed was how to deal with an increasingly powerful, aggressive China. Recognizing that much of the competition with China will take place in the fields of science, technology, engineering, and math; in developing and defending intellectual property; in setting standards for emerging technologies; and in striving for secure supply chains and sufficient market share, Biden and Suga also announced a Competitiveness and Resilience (CoRe) Partnership (PDF). This initiative aims to show that democracies can meet the expectations of their citizens to provide policy solutions to real world problems through “sustainable, green economic growth.” Through a focus on secure networks, advanced information and communications technologies, 5G wireless, semiconductors, biotech, and quantum information sciences, the United States and Japan seek to shape the future evolution of key infrastructures for global growth.

They also reiterated the goal of a “free and open Indo-Pacific,” and sought to dissuade China from seeking to unilaterally change the status quo in the East China Sea, the Taiwan Strait, or the South China Sea. The joint statement's reference was the first time since 1969 the two sides had explicitly mentioned Taiwan. Suga declined to specify the details of his discussion with Biden on the issue, citing “diplomatic exchanges,” but noted that “there is already an agreed recognition over the importance of peace and stability of the Taiwan Strait between Japan and the United States.” The leaders also expressed serious concern about the human rights abuses occurring in Xinjiang and Hong Kong.

Separately, the summit came just days after the Director of National Intelligence's Annual Threat Assessment (PDF) of the U.S. Intelligence Community concluded that North Korean leader Kim Jong Un views nuclear weapons as “the ultimate deterrent against foreign intervention and believes that over time he will gain international acceptance and respect as a nuclear power.” The allies stood firm in demanding Pyongyang abide by United Nations Security Council resolutions requiring it to abandon its nuclear weapons program and desist from testing ballistic missiles, with Suga reiterating the goal of achieving the complete, verifiable, and irreversible denuclearization of North Korea. Separately, the U.S. reiterated its support for the return of Japanese abducted by the North Korean regime, and the two sides committed to the importance of advancing trilateral cooperation with South Korea.

A fourth area of focus was on renewing the alliance as a relationship at the level of people-to-people ties. Recognizing the importance of the human capital that forms the connective sinews of the Japan-U.S. alliance, the two sides announced the renewal of the Mansfield Fellowship Program administered by the Maureen and Mike Mansfield Foundation. This important channel, suspended in March 2020 due to the COVID-19 pandemic, provides U.S. federal employees an opportunity to spend a year living and working in Japan, developing an understanding of their counterpart ministries and agencies across the Pacific so as to facilitate closer and more effective Japan-U.S. cooperation upon their return.

First, despite widespread reporting that the Japanese prime minister would extend an invitation to Biden to attend the Olympic Games, no such invite was publicly announced. This is likely due to the recent explosion in COVID-19 caseloads across Japan, which led ruling Liberal Democratic Party Secretary-General Nikai Toshihiro to speculate on the eve of Suga's departure for Washington that the games might be cancelled (something that the Cabinet, minister in charge of vaccination, and International Olympic Committee all quickly denied was under consideration).

President Biden's comment that discrimination and violence cannot be allowed and that he firmly opposes them was extremely encouraging for me, and I have renewed my confidence in American democracy once again.

A delay in announcing such an invitation makes sense given the rapidly evolving situation in Japan, where vaccinations of the elderly only commenced last week. As new COVID-19 variants have arrived in Japan, with record-breaking case numbers emerged in Japan's “second city” of Osaka, where the Asahi Shimbun describes the situation as “close to panic,” and in neighboring Hyogo Prefecture. There is also a rising caseload in Tokyo.

After meeting with Biden, Suga spoke by phone with Pfizer CEO Albert Bourla to request that the company rush Japan additional supplies, something Pfizer appears to have agreed to do. Japan will reportedly begin general population vaccinations in July, but in the meantime the government has announced plans to reimpose restrictions on Tokyo, Osaka, and Nagoya as caseloads spike. Against such a backdrop, it likely made sense to delay any decision on an invite to the U.S. president.

Separately, domestic U.S. developments were a constant backdrop that threatened to overshadow the summit, which was held in the wake of yet another mass shooting in the United States. During her meeting with Suga prior to the afternoon summit, Vice President Kamala Harris acknowledged the massacre in Indianapolis, and then pivoted to a positive message of respect for and acknowledgment of the “very strong and vibrant Japanese American community” of her home state of California, an important signal of support at a time when hate crimes against Asian Americans and Pacific Islanders have surged (PDF). During the question and answer portion of the Rose Garden press availability, Suga related that he had “discussed the increase of discrimination or violence against Asian people across the U.S., with President Biden.” He added that “President Biden's comment that discrimination [and] violence cannot be allowed and that he firmly opposes [them] was extremely encouraging for me, and I have renewed my confidence in American democracy once again.”

In the end, the U.S. and Japanese leaders appear to have established a warm, personal rapport while communicating a clear vision of the importance of working together to end the pandemic, combat climate change, preserve a free and open Indo-Pacific, and defend democracy. Further opportunities to advance this agenda could come at the climate summit this week and at the G-7 summit hosted by U.K. Prime Minister Boris Johnson June 11–13, a session that may lead to a trilateral meeting with President Moon Jae-in of South Korea, who himself will be coming to the United States for his own summit with Biden in late May. By grounding their relationship on the personal friendship and trust between the president and the prime minister, or “Joe” and “Yoshi,” as they referred to each other repeatedly, the Japan-U.S. alliance appears well-positioned to make progress on these and future challenges in the years ahead.

This commentary originally appeared on The Diplomat on April 20, 2021. Commentary gives RAND researchers a platform to convey insights based on their professional expertise and often on their peer-reviewed research and analysis.