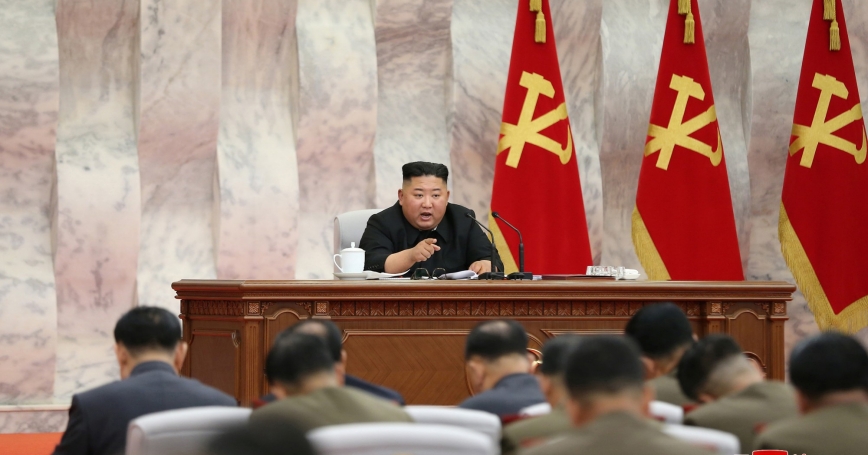 North Korean leader Kim Jong-un speaks during the conference of the Central Military Committee of the Workers' Party of Korea in this image released by North Korea's Korean Central News Agency (KCNA) on May 23, 2020

More than one year into the coronavirus pandemic which has left no corner of the globe untouched, North Korea maintains that it has zero coronavirus cases. This assertion rests on grounds that are tenuous at best.

For one, Kim Jong-un himself said the contrary. Last July, Kim, at an emergency meeting of the Workers' Party Central Committee, admitted there were coronavirus cases in the country and acknowledged North Korea's failure to stop the spread of the virus. Kim several months later criticized his country's poor quarantine system, including substandard sterilization measures, inadequate personal protective equipment, and insufficient testing kits.

Add to this the country's border closures, curbing trade with top-partner China, and increased reports of pneumonia and respiratory infections with coronavirus-like symptoms. Also there is a mass exodus of foreign diplomats due to severe and unprecedented restrictions to stop the spread of the virus, the upgrading of the country's “emergency quarantine posture,” and executions of North Koreans for violating quarantine rules. Indeed, the list goes on. More recently, Kim at a party congress warned of an economic crisis similar to Pyongyang's famine in the 1990s and called for officials to wage another, more difficult Arduous March.

These public health issues, economic hardships, and exhortations for greater austerity notwithstanding, Kim recently upgraded his mansion compound on the east coast and closest to the Sinpo military submarine development base—perhaps in preparation for an inspection of a submarine in development. This not only casts doubt on Kim's concerns for the health situation of the North Korean population; it also suggests Kim's priorities remain focused on nuclear and ballistic missile development.

Coronavirus or not, Kim's appetite for nuclear and missile bargaining with the United States remains intact. For the Biden administration, this likely spells further weapons demonstrations from North Korea, with potentially longer-range, more power missile demonstrations to test Washington's resolve in its nuclear negotiations with Pyongyang.

Soo Kim is a policy analyst at the nonprofit, nonpartisan RAND Corporation and an adjunct instructor at American University.

This commentary originally appeared on The National Interest on April 20, 2021. Commentary gives RAND researchers a platform to convey insights based on their professional expertise and often on their peer-reviewed research and analysis.