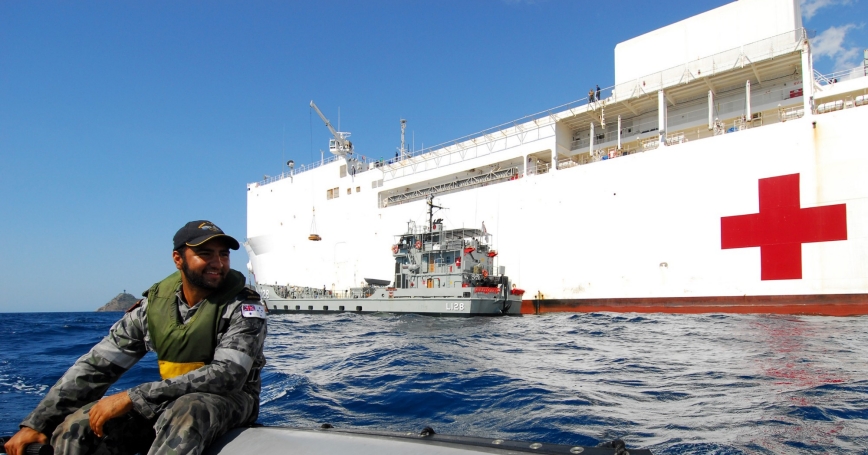 As threats to health security become an ever more important issue for Pacific nations, Australia and the United States have an opportunity to build partnerships by combining their considerable military health capabilities. But in planning how best to help their neighbors, they must avoid the dangers of “drive-by medicine” by focusing on enduring engagement.

It's time to prepare for such calls for help. Ideally, medical assistance could be provided by a mix of civilian and military assets, and the Australian Department of Foreign Affairs and Trade and the U.S. State Department could provide long-term health care partnerships. The United States and Australia have very effective military health capabilities.

The United States has the naval hospital ship USNS Mercy and amphibious warfare vessels which engage with other nations (including Australia) in providing health services. The Mercy has toured the Pacific and Indian Oceans on around 20 assistance missions since 2006. The U.S. Air Force and the U.S. Army have conducted health engagements by air and land.

The U.S. military has also engaged widely in humanitarian assistance efforts that build partner nation capacity in responding to natural disasters. In the Pacific, U.S. personnel engage in activities focused on public health and capacity building to help develop trauma care, medical evacuation, and disease surveillance. Exercises build interoperability with allies. Many other parts of the U.S. military also undertake health engagement activities, most notably through the National Guard's State Partnership Program, which links U.S. states with countries in the region for capacity-building purposes.

In contrast, for more than a decade the Australian Defence Force has largely withdrawn from health activities in the region, largely out of concern that such interventions might have a negative impact. It may now be time to review whether that approach is warranted or sustainable.

There's little doubt that short-term overseas deployments of hospital ships and military health professionals can generate upbeat media coverage and impressive statistics. Such missions are often praised as a key soft-power tool in winning hearts and minds, but observers are increasingly skeptical of what is sometimes called “drive-by medicine” for several reasons:

Militaries can nevertheless make important contributions to Pacific health security. They have unique capabilities that partner countries want and need. A recent ASPI report, Next step in the step-up (PDF), proposes that the ADF establish enduring partnerships in the Pacific involving the regular rotation of teams of ADF clinicians through host-nation hospitals for roughly four weeks each.

Rotations could provide a near-continuous presence of clinicians with different specialties. Rather than introduce new clinical services, this rotational presence, which could include both Australian and U.S. experts, would undertake procedures already performed in host-nation hospitals using host-country equipment and consumables. This would avoid the risk of “aid traps” in which host-country systems become tailored to continuing receipt of external assistance.

Local practitioners experience critical capability constraints, which are likely to worsen. Partner countries could learn new techniques while working alongside foreign clinicians. But partner country clinicians in the Pacific also have valuable expertise to share, including experience of working in small, remote hospitals without advanced diagnostics and expertise in dealing with high levels of trauma and infectious disease.

ADF clinicians are highly trained, but many of them have not had this sort of practical experience while working in the Australian civilian health system. Yet those skills are exactly what they are supposed to exercise when deployed. U.S. military health professionals are often in a similar position. They simply don't get enough opportunities on field deployments. Experience in the Pacific would allow them to develop their professional skills and expand their knowledge of the region.

There are substantial opportunities for the ADF and the U.S. military to partner with Pacific island countries in health. This is best approached not as a continuation of handouts or “aid” but as a long-term, mutually-beneficial partnership providing opportunities for the exchange of skills and experience between local and visiting clinicians.

The ADF could do this alone, but collaboration with the U.S. military could up the ante. The Americans have far greater health capabilities, including appropriate civil–military models and ongoing engagements, such as those in the National Guard, for the benefit of partner countries. Both the U.S. and Australian militaries could benefit from working together in health security. The deployment of mixed teams of U.S. and Australian clinicians to Pacific island countries would provide valuable opportunities for them to learn from each other.

It could be a great example of two countries engaging in out-of-the-box planning, with pooled resourcing where appropriate, as discussed in a 2020 RAND Corporation report on the Indo-Pacific contest.

Australian and U.S. military capabilities can build respectful, enduring, and mutually beneficial partnerships that help improve the long-term health security of Pacific island countries—provided their use is carefully planned to avoid the dangers of drive-by medicine.

This might be a real opportunity to bring health security communities together with a new combined planning construct, one in which the United States could play a key supporting role to Australia.

David Brewster is a senior researcher with the National Security College at the Australian National University. Jennifer D.P. Moroney is a senior political scientist at the nonprofit, nonpartisan RAND Corporation. Beth Grill is a senior policy analyst at RAND.

This commentary originally appeared on The Strategist on May 5, 2021. Commentary gives RAND researchers a platform to convey insights based on their professional expertise and often on their peer-reviewed research and analysis.