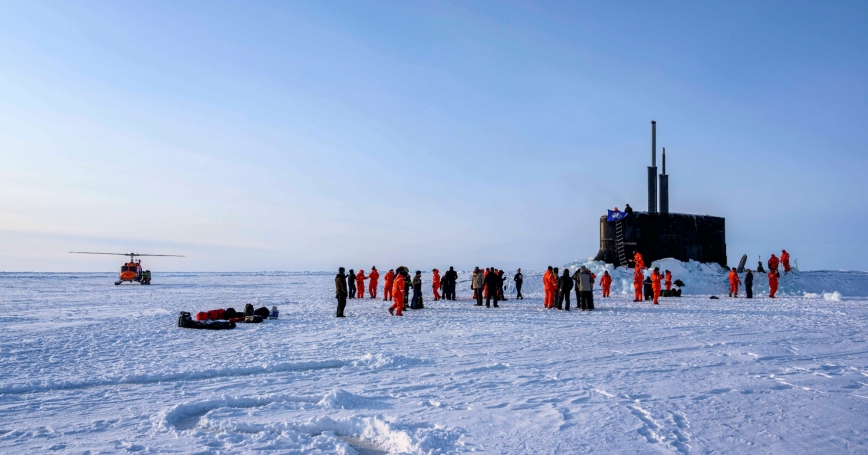 USS Connecticut submarine crew members after surfacing in the Arctic Circle during Ice Exercise, a biennial submarine exercise that promotes interoperability between allies and partners in Alaska, March 7, 2020

Secretary of State Antony Blinken, newly embarked on a swing through Arctic countries, may need the extended summer daylight to handle the crisis in the Middle East as well as his scheduled talks. But Blinken has a real chance to bolster U.S. national and climate security interests in Denmark, then Iceland—where he will participate in the Arctic Council Ministerial, and finally Greenland. Along the way, he will hold his first meeting with Russian Minister of Foreign Affairs Sergey Lavrov, recommit to northern allies and partners on climate change, and provide a check on China's growing interests in the Arctic—all key to Biden administration priorities.

U.S.-Russian relations have been plummeting. Russian massing of troops along the Ukrainian border, the worsening condition of detained Putin opponent Alexei Navalny, and accusations by the United States of Russian interference in the 2020 U.S. presidential election have in recent months spurred further deterioration, making diplomatic engagement of Russia more difficult than ever.

Yet during a Ministerial this week in Iceland, Russia will become an even more important Arctic actor than usual. Moscow will be taking over the rotating chairmanship of the Arctic Council, a regionally powerful organization which has facilitated dialogue on numerous non-military issues since its founding in 1996 through the Ottawa Declaration. As voting members of the Council, the eight Arctic countries, including Russia, the United States, and several NATO allies and partners have formally agreed on several important areas for regional governance including search and rescue, oil pollution, Central Arctic Ocean fishing, and science and education.

An important, continuing Council focus could be climate change, given the amplified effects warming global temperatures have on the physical geography as well as economic and strategic potential of this region. The Arctic is critical for U.S. climate policy, not least due to Alaska's strategic geography and economic resources which include fisheries, hydrocarbons, and minerals. It is also important for U.S. diplomacy on climate change. The last Arctic Council Ministerial in 2019 ended without a joint declaration after the United States insisted—to no avail—that the other seven Arctic countries weaken statements on climate change in the document. Now, the Biden administration has an opportunity to prioritize Arctic climate change to use—rather than work against—the Arctic Council's efforts on cooperative decisionmaking in the region.

The Biden administration has an opportunity to prioritize Arctic climate change to use—rather than work against—the Arctic Council's efforts on cooperative decisionmaking in the region.

Part of Russia's upcoming agenda could also be greater inclusion of Arctic Council observers. The most militarily and economically powerful of these is China, which makes no secret of its ambition to play an ever increasing role in the Arctic—part of which is, effectively, in the United States' backyard. Beijing has had interest in the region for decades, but the more recent effects of climate change on physical access and economic–strategic interests have heightened the priority level of the region for the self-dubbed “near-Arctic state.”

For this reason, Blinken's final stop in Kangerlussuaq, Greenland during his week of Arctic diplomacy is doubly important. Nuuk (with Copenhagen) and Washington have recently concluded a dispute on contracting for Thule Airbase maintenance that will now favor local businesses and labor. Thule is the United States' only year-round military presence above the Arctic Circle, and remains a key aspect of homeland defense and deterrence of Russia. China has recently been keenly interested in Greenland's rare earths and other resources and has also courted Iceland and other Nordic countries for cooperation on science and infrastructure projects, in addition to developing a sustained economic cooperation with Russia in its Arctic region.

Continued positive U.S. engagement in the Arctic Council could be important for balancing the influence of both powers it is competing with globally, and in moving toward the Biden administration's climate change goals. Washington's new priority on climate change could be an issue that will now bind, rather than divide, Arctic states. In the Arctic, Russia is at the same time a U.S. neighbor, a fellow Arctic nation—with all attached responsibilities—and an adversary. A renewed and sustained United States engagement in Arctic diplomacy could help build a more secure environment through dialogue on key issues that might ultimately prevent some misunderstandings of Russian or U.S. actions—an important element at a time when U.S. and Russian military presence in the Arctic is increasing. The United States may also be able to use its historically cooperative ties with all Arctic nations, including Russia, in the region, to help limit an otherwise warming relationship between Russia and China.

This commentary originally appeared on Defense One on May 18, 2021. Commentary gives RAND researchers a platform to convey insights based on their professional expertise and often on their peer-reviewed research and analysis.