Should Mothers Work? We've Been Asking the Wrong Question 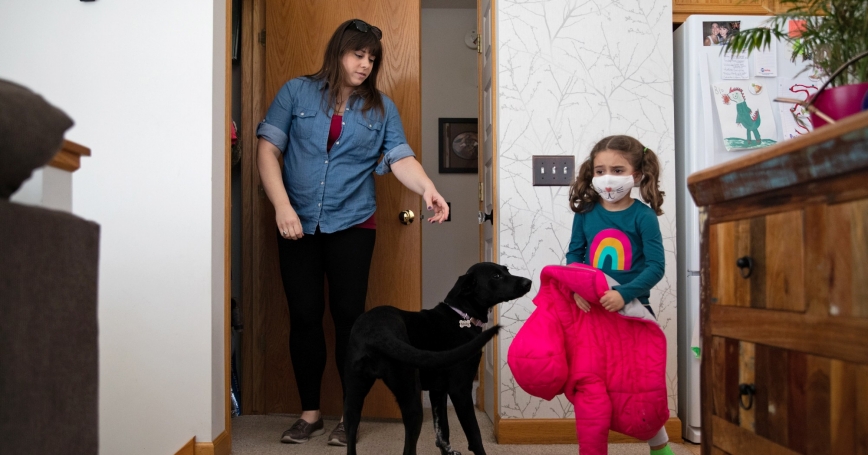 For many women, this question is surely quite personal; the answer may depend on the ages of her kids, their health, the state of her career, her salary, and other factors. But it's also a public policy question that America started wrestling with 80 years ago.

Marital status, work status, household income, presence of a boyfriend, legitimacy of children, drug use—the government has used all of these, at one time or another, to decide which mothers deserve tax-funded, cash support for themselves and their children.

The pandemic's far reach of disruption, depression, and death have upended all understanding of which mothers are in need, and what they need. As schools and day cares closed, millions of women were driven from the labor market. Major policy proposals have followed, including Sen. Mitt Romney's child tax credit and President Joe Biden's family plan.

The pandemic suggests that “Should mothers work?” perhaps was the wrong question all along. And we need to start asking the right questions to create a sustainable economic recovery.

Determining a Mother's Worth

There have been three eras of policy in how the federal government decided which mothers should receive public help.

The first era started during the Great Depression. Many states at the time had Mothers' Pensions, which provided cash benefits for children. With the Social Security Act of 1935, the federal government began to share that cost and put the pensions under a federal umbrella with Aid to Dependent Children, which was commonly referred to as “welfare.” (The name later changed to Aid to Families with Dependent Children).

The pandemic's far reach of disruption, depression, and death have upended all understanding of which mothers are in need, and what they need.

These welfare benefits were generous, but arbitrarily awarded. Mothers could apply to the local administrator, but they had no right to aid. Caseworkers could (and did) disqualify applicants for reasons such as the home was unsuitable, the mother was employable, there was a “man in the house,” or the children were illegitimate.

Less than half of unmarried mothers received welfare, though many more were income-eligible. Others were told, in essence, to find a husband or find a job. Those denied were, unsurprisingly, disproportionately Black women. Many researchers posit that this was no accident; some local administrators were deliberately given flexibility in order to direct benefits away from Black women and women of “loose morals.” In this era, mothers considered worthy of welfare were largely white widows.

A second era, in which the government determined worthiness by economic need, began, somewhat unwillingly, in the late 1960s. After the Civil Rights Act of 1964, the arbitrary awarding of benefits was dismantled by a series of court cases, civil actions and protests. Welfare became an entitlement and in the years that followed, the number of women on welfare increased dramatically.

About the same time, the number of single mothers in the United States also began to rise as both divorce and nonmarital births increased. In 1970, 11% of families with children were headed by single mothers; by 1999, this had reached 26%. Many saw this concurrence as causality, and the “welfare queen” pejorative was coined to describe mythical women who have children in order to get more benefits. (The benefits weren't all that generous. At their peak, in 1975 (PDF), the average benefit per recipient was the equivalent of $246 a month today.)

Also through this era, more mothers started working. In 1967, half of all mothers were stay-at-home mothers, but by 1990, only about 27% were. Through the '70s and '80s, mothers joined the labor force much more quickly and to a much larger degree than they joined the welfare rolls.

All these cultural and political forces collided to recast the question of worthiness. If more mothers were working voluntarily, why should some get paid, from Americans' tax dollars, to not work?

The result was the expansion of the earned income tax credit and the enactment of the Personal Responsibility and Work Opportunity Act of 1996. In this third era, the worthy mothers were working mothers.

The central goal of the Personal Responsibility Act was to reduce the number of women on welfare. Here's how: The law ended the federally financed entitlement to benefits for poor, single mothers and replaced it with block grants to states called Temporary Assistance to Needy Families. States could spend the TANF grant on welfare to single mothers, but states could also spend it on any program that promoted work, promoted marriage, or discouraged out-of-wedlock births.

Given that choice, most states tapped into the grants for non-welfare purposes, too often treating it like a slush fund. TANF dollars have gone to marriage counseling classes, college scholarships for students who do not come from low-income households, foster care and Head Start programs. (On occasion, the money was also reportedly embezzled.)

Texas, for example, spends about 4% (PDF) of its TANF funds on basic assistance, reaching 4 out of 100 families in poverty in the state.

The 1996 policy changes were two steps in different directions. Rather than deciding which mothers are worthy enough for cash benefits that supplant the need for work, the expansion of the tax credit was a step in supporting work writ large. In 2020, the average amount refunded was $2,461. But the Personal Responsibility Act was judgmental of mothers' behavior. It seems to excoriate single motherhood and codify what the caseworkers of the 1930s and '40s told women: get a husband or get a job.

Some might argue that the government's policy through all three eras was not about passing judgement on mothers, but about creating the best environment for children. That could be true. But the 1996 Personal Responsibility Act instituted a lifetime benefit ban, for both welfare and food stamps, if the mother has a drug felony conviction (later removed or modified by most states), but not for any other felony, including child abuse or neglect.

The pandemic is bringing this third era, and this tiered version of motherhood, to a crashing close. In April 2020, more than 10 million women lost their jobs in a single month. Schools were, and some are still, closed to in-person instruction and many day cares have gone out of business. Cultural observers say many mothers are at a breaking point, in crisis, or at the very least, drinking a lot more.

The pandemic made clear that our policy approach to mothers has been misguided.

Never has the ability to work and the need to care for children been in such obvious conflict on a nationwide scale. And in that way, the pandemic made clear that our policy approach to mothers has been misguided. For the last 80 years, the government has distributed benefits by dividing mothers up: married mothers don't need help, single mothers do, but they only get it if they are morally good enough (first era), poor enough (second era), or working (third era). All of that missed the mark.

What is it worth to the United States to have mothers in the workforce? That is the appropriate policy question. And the answer to that question does not divide mothers by marital status or moral evaluation. Instead, it looks at constraints in our labor market, identifies the reasons for work-limiting behavior, and assesses if making it feasible for mothers to have a job warrants the cost.

It's no secret what the barriers are. About 1 in 4 private sector workers doesn't get paid sick days, according to the Bureau of Labor Statistics. That makes work difficult for mothers, considering children get, on average according to the Centers for Disease Control and Prevention, four colds a year.

Workers in the United States are also not entitled to paid family leave after the birth of a child, and that has been found to reduce mothers' labor force attachment. On top of that, childcare is incredibly expensive. In Texas, infant care costs on average $9,300 a year, according to a report by the Economic Policy Institute. That's almost as much as a year of tuition at the University of Texas.

But the U.S. economy needs mothers to work. Growth coming out of the COVID-19 recession—and we are still 8 million jobs down from January 2020—will depend on how many people return to work and how quickly.

Not only were women hardest hit by job loss, they were hardest hit by caregiving loss. If the 2 million women who left during the pandemic to care-give don't come back, our economy will suffer for it. Mothers could be the centerpiece of labor market recovery, or the reason for its weakness.

Romney's proposed Family Security Act (PDF) would end TANF; extend the child tax credit to a fully refundable child tax credit for every child in America, starting four months before their due date, and paid out monthly; and simplify the earned income tax credit so that it does not vary with the number of children. Biden's American Families Plan would similarly extend the child tax credit to be fully refundable, but it also would mandate employers provide seven days paid sick leave, create a national paid family leave program, provide public preschool starting at age 3 (called “pre-3”), make investments in childcare providers and workers, and cap childcare costs for low- and middle-income families.

Sick days, paid family leave, child tax credits, large investments in childcare—none of these policies is free, and the objections to them are varied. Why should a taxpayer without children pay for someone else's family leave, or someone else's childcare? Surely many would look at a mother-focused agenda and think, “If you can't afford childcare, don't have children.”

The potential economic gains of supporting mothers in the workforce are large and diffuse.

Another objection to these types of government benefits is more philosophical: It's not the government's job to provide childcare, and the Families Plan the president is proposing is an unnecessary intervention into people's lives. But look back to 1935 or 1996. The government has been in the business of deciding whether mothers should work—and going about achieving that goal—for a very a long time. It's not a new area for government. It's a new approach, one that could have lasting dividends for the economy.

Kathryn A. Edwards is an economist at the RAND Corporation and a professor at the Pardee RAND Graduate School.

This commentary originally appeared on Dallas Morning News on May 9, 2021. Commentary gives RAND researchers a platform to convey insights based on their professional expertise and often on their peer-reviewed research and analysis.