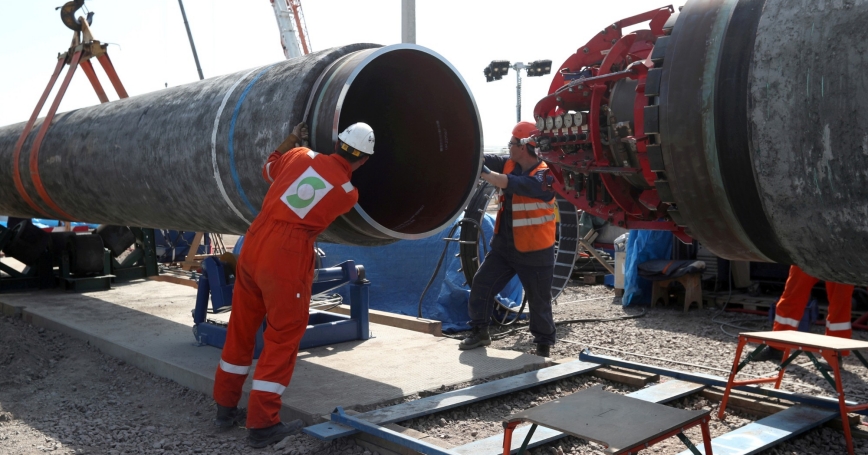 Workers at the construction site of the Nord Stream 2 gas pipeline, near the town of Kingisepp, Leningrad region, Russia, June 5, 2019

by William Courtney and Richard Kauzlarich

On June 4, President Vladimir Putin announced completion of the first of two lines of the Nord Stream 2 gas pipeline under the Baltic Sea from Russia to Germany and on June 7 Secretary of State Blinken called the project a “fait accompli.”

At their June 16 Summit in Geneva, Presidents Biden and Putin might consider how to reduce the sharp tensions over this project. Cooperation among governments and companies may offer potential.

President Biden has taken a first step. Last month he said the pipeline was “almost completely finished,” and he waived the imposition of extraterritorial sanctions on the Gazprom-owned Swiss company building it. That would be “counter-productive” for U.S.-European relations, he said. Biden's decision clears the way for Russian ships to finish the pipeline in the weeks ahead.

Nord Stream 2 has sparked bitter controversy. Biden's waiver has stirred howls of protest from Congress, but it is unlikely to override the action. Now, policymakers may be wise to focus on finding compromises that protect essential interests of all key stakeholders.

Nord Stream 2 will be the latest addition to Gazprom's array of export pipelines to Europe. In the early 1980s, the U.S.S.R. built a large-capacity pipeline through Ukraine to Europe. In 1997 Gazprom began sending gas via the onshore Yamal Pipeline through Belarus and Poland. In 2003, Gazprom completed the Blue Stream Pipeline under the Black Sea to supply gas to Turkey. In 2012, Gazprom completed Nord Stream 1 under the Baltic Sea; Nord Stream 2 is a replica along a parallel path. In 2019, Gazprom finished the TurkStream Pipeline under the Black Sea to Turkey.

Considering all these options, Gazprom may have excess shipping capacity, especially with the ebbing of West Siberian output and European consumption. Gazprom foresees exports to Europe this year of 175–183 billion cubic meters (bcm) per year. Under a five-year agreement brokered by the European Union and signed in 2019, Gazprom contracted to pay for at least 65 bcm via Ukraine in 2020 and 40 bcm per year through 2024. Because of the demand drop during the pandemic, Gazprom in 2020 shipped less than 65 bcm but paid for the full amount.

Ukraine fears that Gazprom will freeze it out after Nord Stream 2 comes onstream. This could deprive the country of over $1 billion per year in transit revenue. Many Westerners sympathize with Ukraine, seeing it as a victim of Russian aggression. They worry that Russia may do further harm by reducing or eliminating gas transit.

In 1993, Chevron signed a $20 billion joint venture deal with Kazakhstan to develop the Tengiz super-giant oil field at the edge of the Caspian Sea. A multinational Caspian Pipeline Consortium (CPC) was formed to build an export pipeline to Russia's Black Sea port of Novorossiysk. But greed and confusion about commercial realities delayed agreement on a financially viable structure. Finally, in 1996 Kazakhstan's President Nursultan Nazarbayev, U.S. Vice President Al Gore, and Russian Prime Minister Viktor Chernomyrdin broke the logjam. Everyone gave a little. Since then, the pipeline has been a reliable conduit and later was expanded.

High-level diplomacy and company negotiations also reinforced each other to bring about the Baku-Tbilisi-Ceyhan (BTC) Pipeline. It is the main route for the export of Azerbaijan's oil to world markets. BTC was the first major energy export pipeline in the former Soviet Union that did not go through Russia. Initially, Moscow saw it as anti-Russian, but later Russian oil giant Lukoil began using it.

The experience of CPC and BTC may offer lessons for reducing risks associated with the export of Russian gas to Europe.

Engaging all interested governments and companies at high levels is vital to shaping cooperative solutions. Western leadership may be required to encourage all key players to collaborate.

Together Europe, as a largely monopsonist purchaser of pipeline gas, and Russia, as its major gas supplier, have a stake in reliable and efficient gas transport.

Together Europe, as a largely monopsonist purchaser of pipeline gas, and Russia, as its major gas supplier (one-third of European gas demand), have a stake in reliable and efficient gas transport.

Pipelines have varying comparative advantages. Nord Stream 1 and 2 may be the most efficient way to transport gas to Europe from Russia's Arctic Yamal region, whereas TurkStream may be the best way to ship West Siberian gas to southeastern Europe. To some degree export pipelines can be substitutable but at a cost.

Europe has enough leverage to insist that some gas flows through Ukraine. Russia has an interest in keeping this option as the most efficient route to Europe for West Siberian gas. Transport through Ukraine can help Kiev fund the modernization of its aged pipeline system. Facing greater competition for transit revenue, Ukraine may be spurred to do more to exploit its own gas resources and develop green hydrogen from renewable energy for the European market.

If Gazprom's pipeline monopoly to Europe is a hindrance to finding cooperative solutions, the European Union may press for unbundling of production and transport.

A single “grand bargain” for Russian gas in Europe is unlikely to be achievable, but this might not impede step-by-step progress.

William Courtney is an adjunct senior fellow at the nonprofit, nonpartisan RAND Corporation and a former U.S. ambassador to Kazakhstan and Georgia. Richard Kauzlarich is codirector of the Center for Energy Science and Policy and distinguished visiting professor, Schar School of Policy and Government, George Mason University.

This commentary originally appeared on The Moscow Times on June 11, 2021. Commentary gives RAND researchers a platform to convey insights based on their professional expertise and often on their peer-reviewed research and analysis.