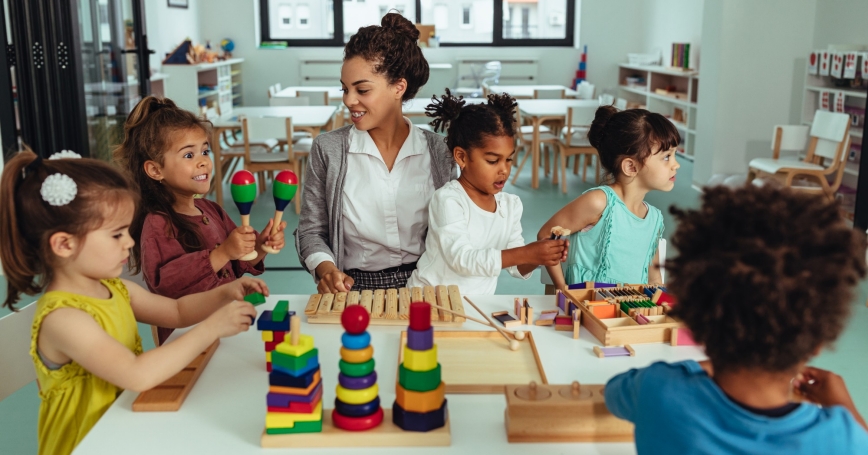 by Lynn A. Karoly and Jill S. Cannon

Public sector investments in voluntary preschool programs have been growing, in line with our understanding of the importance of the early years for children's development. At the federal level, annual spending on Head Start for three- and four-year-old children living in poverty reached nearly $10 billion as of 2019. States added another $9 billion to this total through a combination of voluntary preschool programs also targeted toward children in lower-income families (or facing other disadvantages). In addition, a handful of states and localities funded programs available to all preschool-age children regardless of their circumstances.

Despite the understanding of the value of these investments, access to early learning programs remains considerably uneven. As of 2019, 53% of four-year-old children living in poverty were enrolled in preschool compared with 76% of their counterparts with a family income at five times the poverty level (about $125,000 for a family of four). A similar income gap in preschool participation is evident for three-year-olds, as well.

What do these numbers mean? In essence, preschool attendance is near universal for families with higher incomes. These families can afford the five-figure cost of a private program. Children in low-income families, on the other hand, must compete for a limited number of publicly-funded preschool programs. The federal Head Start program has never been funded to reach all eligible children, and many state-funded programs are likewise underfunded.

As a result, measures of school readiness show that lower-income children are more likely to enter kindergarten without the skills needed to succeed in school. And children who start out behind, tend to stay behind.

Lower-income children are more likely to enter kindergarten without the skills needed to succeed in school. And children who start out behind, tend to stay behind.

Oklahoma's free voluntary preschool program, open to all four-year-olds, demonstrates what is possible. Estimates show that 74% of recent kindergarten cohorts participated in this state-funded program in the year before they started kindergarten. When enrollment of low-income children in the free Head Start program is also accounted for, nearly 90 percent of kindergarten students in Oklahoma were enrolled in either the state-funded preschool program or Head Start before they started school. The bottom line: When affordable, voluntary, high-quality preschool is made available to all families, nearly all families choose to enroll their children.

Under the Biden administration's proposed American Families Plan, the federal government would address these disparities in preschool access by adding $200 billion to the public sector's investment in high-quality preschool for all three- and four-year-olds.

How can we make sure that this historic investment, if approved by Congress, counts?

Here are four issues for policymakers to consider:

Research has shown that high-quality programs facilitate the best outcomes for students, but one of our studies shows that this investment cannot be made on the cheap. Our recent estimates indicate that the cost for a school-day academic-year preschool program—using national-level salaries and prices for other resources to achieve quality standards consistent with programs that produce favorable impacts—is about $12,700 per child. States and communities with a lower cost of living will be below this estimate; higher-cost areas will exceed it. Additional costs for system-level supports would be expected to add another few hundred dollars to a few thousand dollars per child, depending on the requirements to achieve an effective system (e.g., teacher professional development and effective data systems).

As our latest study shows, along with our earlier research in Oklahoma and South Carolina, program reimbursement can sometimes fall short of the funding required to meet existing standards, much less high-quality standards. This reimbursement gap means that providers must find other sources of revenue or cut costs to sustain their programs. Under a new federal investment, these reimbursements may need to vary by provider type to reflect differential costs for such factors as facility rent, utilities, and maintenance, and whether transportation is included.

Our estimate of about $13,000 per child for high-quality preschool assumes all lead classroom teachers have a four-year college degree and receive a salary and benefits on par with public school kindergarten teachers. This is a common feature of effective publicly-funded preschool programs already operating at scale. Yet it is all too common for community-based providers in some state-funded programs to pay their teachers much less than their public-school counterparts, in part because the reimbursement rate is too low and teacher compensation is one way to cut costs.

Studies show that families benefit from having choices in terms of where preschool providers are located (e.g., schools or in the community), program hours of operation, and other features that matter to parents and guardians (e.g., language and cultural relevance). Program hours are particularly salient for working families who may need care beyond a part- or school-day preschool program, during school holidays, and during the summer months. Considerations of subsidies for extended care options are key for ensuring full participation in voluntary preschool programs, especially on the part of children from lower-income families.

In comparison with other advanced economies, the United States stands apart for our relatively low rate of public investment (PDF) in the early years, with potential consequences for our economic competitiveness. While the proposed investments in preschool embodied in the American Families Plan will help to fill that gap, it is critical that the early childhood investments are made wisely, recognizing the true cost of ensuring all children have an opportunity to reach their highest potential.

Lynn A. Karoly is a senior economist at the nonprofit, nonpartisan RAND Corporation. Jill S. Cannon is a senior policy researcher at RAND.