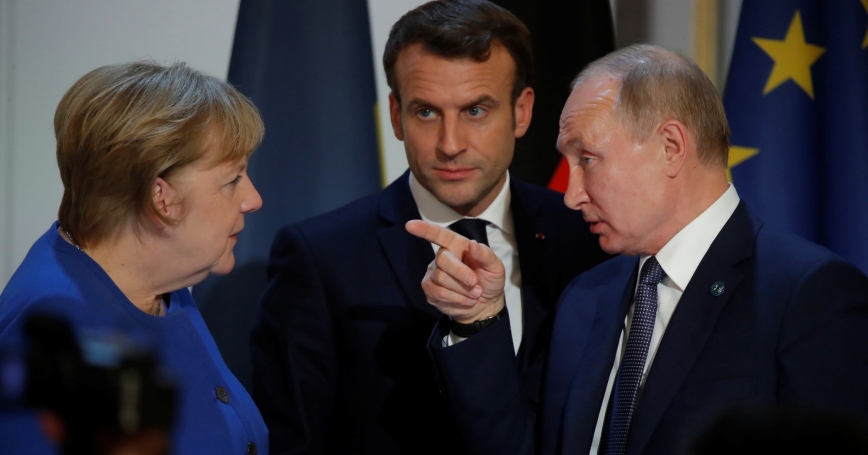 Photo by Charles Platiau/Pool via Reuters

The Kremlin claims Europe is a declining and disunited force that can be belittled and threatened. Despite the Biden-Putin summit last month in Geneva, Russian misbehavior does not seem to have ebbed. From aggression in Ukraine to cyberattacks to backing Alexander Lukashenko's air piracy in Belarus, Russia continues to challenge the West. The Kremlin's misguided posture toward Europe helps the West unify in countering Russian misbehavior.

The Kremlin often insults and shows disdain for the West, especially Europe. Even though German chancellor Angela Merkel visited Russian opposition leader Alexei Navalny in a Berlin hospital where he was being treated for Novichok poisoning, when he flew home to Moscow he was promptly imprisoned. Russian president Vladimir Putin angered French president Emmanuel Macron by telling him in a telephone call that Navalny may have poisoned himself. When the European Court of Human Rights said Navalny should be freed, Moscow called the demand “baseless and unlawful.”

A favored Kremlin tactic is to dismiss Europeans as no more than U.S. toadies. In June after European Union leaders opted not to seek a Russian summit, Foreign Minister Sergey Lavrov alleged they were doing the bidding of “Big Brother.” At times, the Kremlin revives the Cold War tactic of trying to scare Europe. On July 14, a senior official said Russia would use the “harshest methods” against any future warships which ventured near Crimean waters.

The Kremlin's mistreatment of Europe can come at a cost. During a February visit to Moscow by EU foreign policy chief Joseph Borrell, the Kremlin expelled EU diplomats. Borrell returned to Brussels and backed a harder EU policy toward Russia, one better aligned with Biden's. Tense relations with the EU may also hinder any Russian efforts to gain relief from the EU's proposed carbon border adjustment mechanism, unveiled on July 14. This tax could cost Russia $7.6 billion per year, a burden the Kremlin calls “extremely unpleasant.”

To keep a floor on relations with the West, Russia counts on energy exports to Europe, soon also through the Nord Stream II gas pipeline, and on the desire of some Europeans for better ties with Russia. Macron says “alienating Russia was a profound mistake,” he professes a desire to “tie Russia and Europe back together,” and he asserts that “the policy of progressive sanctions on frozen situations is no longer effective.…”

This commentary originally appeared on The National Interest on July 20, 2021. Commentary gives RAND researchers a platform to convey insights based on their professional expertise and often on their peer-reviewed research and analysis.