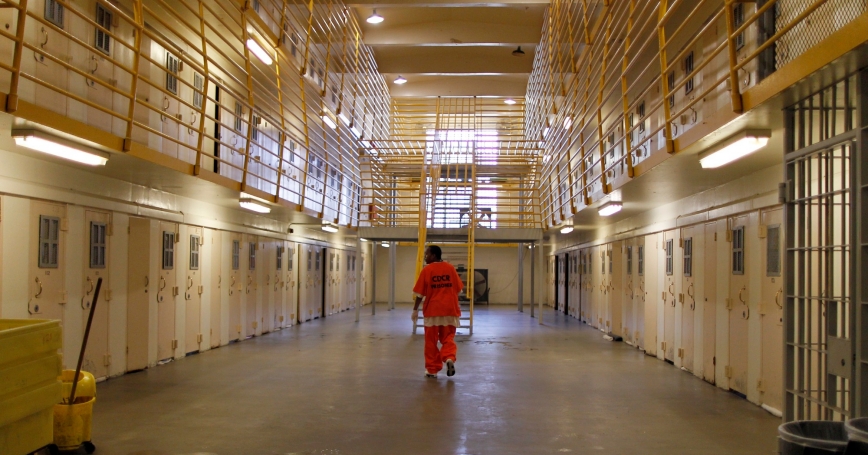 An inmate walks back to his cell after mopping the floor at the California Institution for Men state prison in Chino, June 3, 2011

Los Angeles appears to be having a hard time sticking with the idea of defunding the police. The city reallocated $89 million last year originally slated for police services, but this year L.A. and other major cities are boosting police budgets, particularly in the face of an alarming surge in homicides.

For those who support criminal justice reform and investing in vulnerable communities, defunding prisons might be a more durable way to go.

Although it's not as much as on policing, the United States spends billions on prisons, jails, and juvenile detention facilities. Between 1980 and 2010, this spending quadrupled from roughly $20 billion to $80 billion—a reflection of the crime-punishment wave of the mid-1980s and 1990s that led to huge increases in incarceration that disproportionately affected Black Americans.

Such extraordinary expenditures on corrections are hard to justify today. Generation Xers account for about 30 percent (PDF) of the prison population. Born roughly between 1965 and 1979, they are well past the prime ages of criminality. Younger generations are much less engaged in crime overall. The result: empty beds in correctional facilities and an opportunity to reclaim and redirect billions of dollars.

Research conclusively shows (PDF) that criminal behavior peaks when people are in their early 20s. And not all generations are equally engaged in crime—or equally punished, according to a study published last year.

For those who support criminal justice reform and investing in vulnerable communities, defunding prisons might be a durable way to go.

Gen Xers were the wrong age at the wrong time. The mid-1980s to 1990s was an era of rising crime—particularly violent crime—fueled by the crack cocaine epidemic. Homicide rates doubled (PDF) between 1960 and 1980 and didn't decline until the 1990s. Men then in their teens and 20s were convicted at high rates (PDF), and the U.S. prison system rapidly expanded.

Fortunately, Gen Xers appear to have been outliers. The incarceration rates of millennials resemble those of baby boomers and should remain that way since millennials are already past the peak ages of criminal behavior.

That leaves Generation Z. As of January 2020, teens and 20-somethings were being arrested at even lower rates than millennials. Although there is evidence of an increase in violent crime among young men during the pandemic, so far it is not nearly on the scale of what happened with Gen X in the 1980s.

By 2019, juvenile detention rates were at historical lows and dropped an additional 25 percent during the pandemic as facilities tried to halt coronavirus transmission. That's leaving a lot of expensive facilities mostly empty. Nationwide, per capita operating costs rose 44 percent from 2014 to 2020 (PDF). Four states—Alaska, New Hampshire, New York, and Vermont—spend more than $500,000 per year to house a juvenile. California spends more than $300,000.

The same economics hold true for adult correctional facilities. Between 2008 and 2018, the incarceration rate fell 21 percent, and it has fallen even faster during the pandemic. In half of the states, prisons are at 85 percent of capacity or less. But spending on building and running jails and prisons has held steady (PDF).

Shifting funds from one state or local agency to another is bureaucratically and politically difficult—made more so by negotiations with unions that represent correctional officers. Yet it makes little sense to keep funding incarceration at the same level when it is needed less and less.

Beyond the wastefulness, it may create a perverse incentive to fill the empty cells. Although causation is hard to prove, fewer people are serving out sentences in local jails, and more are being held in jail pretrial (PDF).

The process of shrinking prisons—and their budgets—could be sped along by releasing prisoners who are no longer threats to society. Many such discussions focus on diverting young first-time offenders. But this ignores the new reality of prisons: There are now more people 55 and older in state prisons than aged 18 to 24—a complete reversal from 20 years ago. America is increasingly spending its tax dollars locking up older people.

The process of shrinking prisons—and their budgets—could be sped along by releasing prisoners who are no longer threats to society.

We might reasonably expect most Gen Xers, now in their 40s and 50s, to have been released years ago after completing prison sentences received in their 20s. Instead, they fell victim to another aspect of the crime-punishment wave: an emphasis during sentencing on prior criminal histories. The bluntest such tools were three-strikes laws in many states, including California, that mandated incarceration and led to lengthy sentences for even minor infractions.

Even more destructive are sentencing guidelines based on a defendant's prior convictions—which sometimes carry more weight than the severity of the present crime. Releasing older offenders, or at least not incarcerating them solely on the basis of their prior criminal history, could unlock this trapped generation without harming public safety.

Regardless, new lows in incarceration rates present a chance to shift resources away from costly correctional facilities and toward education, job training, transportation, and other community services.

In other words, savings on prisons, juvenile detention, and jails could pay for the aims of the many “defund the police” campaigns—and in a way that has more political support and no trade-off on public safety.

Shawn Bushway is a senior policy researcher at the nonprofit, nonpartisan RAND Corporation whose work is focused on criminal justice issues. Nidhi Kalra is a senior information scientist at RAND.

This commentary originally appeared on Los Angeles Times on August 9, 2021. Commentary gives RAND researchers a platform to convey insights based on their professional expertise and often on their peer-reviewed research and analysis.