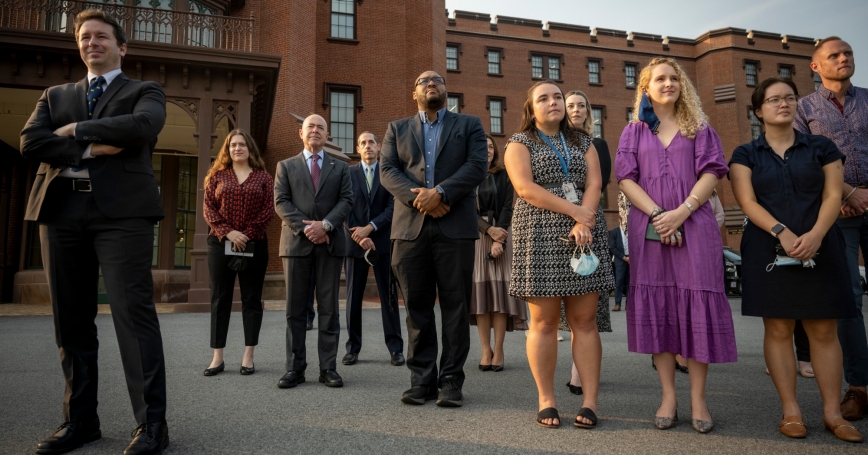 Homeland Security Secretary Alejandro Mayorkas joins the U.S. Coast Guard Ceremonial Honor Guard and other DHS employees in raising a flag that was flown over the 9/11 Memorial in New York City on September 1, 2021, in Washington, D.C., September 14, 2021

The Department of Homeland Security owes a Quadrennial Homeland Security Review (QHSR) report to Congress by the end of calendar year 2021 and a department Strategic Plan by February 2022. The QHSR Report is the department's “capstone strategy document which is updated every four years as required by law.” It is intended to provide direction on the long-term strategy and priorities for the department. The last QHSR was delivered to Congress in 2014. The DHS Strategic Plan “articulates the Department's missions and goals, the strategies [employed] to achieve each goal, and long-term performance measures [used] to evaluate our progress.”

To meet this end-of-year requirement, two possible approaches stand out. The first would be to dust off and update the 2014 QHSR (PDF) and the DHS Strategic Plan for Fiscal Years 2020–2024. The core values and guiding principles could be revalidated and minor changes made to the five operational missions and enterprise support functions. After all, these five operational mission areas remain relevant to the department.

The second approach to developing the QHSR report and DHS Strategic Plan would be to recognize that fundamental and profound changes have occurred in the threats and risks confronting our nation and are continuing to stretch the department in its key mission areas. This approach would recognize the need for charting, or at least considering, a new operational and organizational path forward.

There are strong arguments for the second approach that should be considered. Simply making minor adjustments to the most recent 2014 QHSR or FY 2020–2024 strategic plan would likely fail to account for the important changes that are occurring across all five operational mission areas.

Simply making minor adjustments to the 2014 QHSR or FY 2020–2024 strategic plan would likely fail to account for the important changes that are occurring across all five operational mission areas.

Countering terrorism has gone from nearly exclusive focus on foreign threats to a growing emphasis on domestic violent extremism. Yet DHS also endeavors to remain vigilant against the foreign terrorist threat, which has the potential to increase if the Taliban permit al Qaeda and ISIS to establish safe havens in Afghanistan from which to train, experiment, and plan attacks. The recent use of DHS personnel for policing in U.S. cities bears further scrutiny. And we have witnessed the growing importance of transnational threats to security in the homeland; the current pandemic provides ample evidence of these emerging threats.

The southern border is experiencing the largest number of immigrants attempting to cross into the United States in over 20 years. The immigration system is on life support, failing to respond to the realities of populations such as the “Dreamers.” The immigration courts cannot keep pace with the demands, and changing enforcement policies complicate and confuse all who work in or are affected by the immigration system.

The cybersecurity and critical infrastructure landscape has shifted dramatically. Nation-states, nonstate actors, and individuals perpetrate attacks with increasing regularity and effect. They affect our cyber networks, election infrastructure, and social media. Cybersecurity vulnerabilities have continued to expand as more of Americans' economic, security, and social lives reside on increasingly insecure networks. The attack on Colonial Pipeline provides ample evidence of the effect of these attacks on our economy, security, and daily lives.

Aging infrastructure and climate change contribute to rising costs. Over the last 20 years the number of disasters costing more than $1 billion to remediate has continued to rise and exceeded 20 in 2020. Some have estimated that the bill to repair or replace the aging infrastructure will be $4.5 trillion by 2025. These totals only partially cover building preparedness and resilience into America's critical infrastructure systems and society writ large.

The pandemic has afforded new insights into what constitutes critical infrastructure. Prior to COVID-19, the importance of extending broadband communications throughout the United States seemed almost theoretical by comparison to the present. Now we have ample evidence of the importance of extending these services for our work, health care, schools, and societal well-being.

The enterprise support functions could also benefit from rethinking to account for changes in the environment. Some progress has been made on workforce issues, but DHS is still seen as a tough place in which to work and can be challenged to fill key positions. The new Evidence Act has significant implications for the department that directly relate to the QHSR report and strategic plan. Specifically, the act's mandate that “government decisions should be based on rigorous evidence” suggests greater attention to developing department goals, objectives, and priorities that have associated metrics for assessing performance.

These are just a few examples of recent fact-of-life changes affecting the department and its stakeholders. At this point, it may make sense to consider more than just revalidating core values and making minor changes to five homeland security operational missions and enterprise functions. Twenty years have passed since 9/11 and the establishment of DHS. This may be a moment to consider all options. Basic assumptions that have guided the department could be reconsidered. Legal, regulatory, policy, and internal procedures could be reevaluated. Oversight, management, and organizational issues could be considered as well.

Such a significant undertaking could not be completed in time to have the QHSR report and strategic plan submitted within the next few months, as historically the preparation of the QHSR and DHS Strategic Plan have taken over a year of intensive analysis.

However, these two documents could lay the foundations for a secretary-directed deeper examination of the department, including recommendations to Congress on mission and organizational changes, which seem appropriate given the changing threats and risks.

Daniel M. Gerstein is a senior policy researcher at the RAND Corporation. Previously, he served at the U.S. Department of Homeland Security (DHS) as Under Secretary (Acting) and Deputy Under Secretary in the Science & Technology Directorate.

This commentary originally appeared on Homeland Security Today on September 22, 2021. Commentary gives RAND researchers a platform to convey insights based on their professional expertise and often on their peer-reviewed research and analysis.