Moscow Hesitated in Poland—Will It in Belarus? 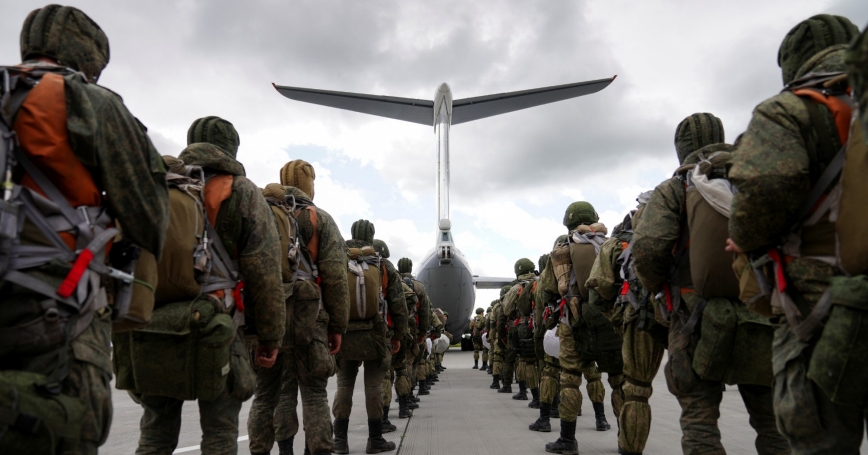 Russian paratroopers line up to board a transport plane during Zapad-2021 military exercises at an aerodrome in Kaliningrad Region, Russia, September 13, 2021

Forty years ago, Russia used a major military exercise in part to scare Poland's communist leaders into cracking down on protesters, many associated with the independent trade union Solidarity. A similar Russian exercise now could be aimed in part at pressuring Belarus. If so, the West could respond in several ways.

On September 10, Russia began a week-long military exercise called Zapad-2021. Perhaps involving some 100,000 personnel, it focuses on Russia's western region and Belarus. The exercise may simulate threats from NATO members Poland and the Baltics and from Scandinavia.

This war game might come in the nick of time for an anxious Kremlin. Since a blatantly stolen presidential election in August 2020, Belarus has been gripped by public unrest and anger. The dictatorial regime of President Alexander Lukashenko has unleashed violence. More than 35,000 Belarusians have been detained and hundreds tortured. But popular opposition may not have ebbed, even if it is less visible. Moscow could want tougher measures.

Repression has given rise to an opposition-in-exile operating from Lithuania. In July, President Biden and Congress received its leader, Sviatlana Tsikhanouskaya.

Europeans back her and the opposition. Germany seeks to show these “courageous people that we are by their sides.”

This opposition evokes memories from the late 1970s and early 1980s of Polish protests. In the Soviet-controlled Eastern Europe, they were the largest nonviolent challenge to authority. Possibly not by accident, Zapad-1981 was the largest ever Soviet military exercise, involving 100,000 to 150,000 troops.

There are similarities, and differences, in the two exercises and their political dimensions.

One similarity appears to be the goal of intimidation. In September 1981 the Kremlin used Zapad to press wavering Polish leaders. Three months later, Polish communists imposed martial law. Thousands of oppositionists were jailed and nearly a hundred were killed.

The Kremlin might employ Zapad-2021 to induce tougher repression in Belarus or its acceptance of an air base long-sought by Moscow.

The Kremlin might likewise employ Zapad-2021 to induce tougher repression in Belarus or its acceptance of an air base long-sought by Moscow.

Another similarity could be the costs of intervention. In 1981, the USSR was struggling with food shortages and a demoralizing war in Afghanistan. Any thrust into Poland may have faced armed resistance or a longer-term insurgency. Costs and risks could have been high.

Today Russia is more prosperous, but its economy is sluggish and living standards have dropped. Generous subsidies to bolster a compliant regime in Belarus may be disliked in Russia.

A third similarity might be fear of losing a sphere of influence. In 1981, the Kremlin saw any Polish exit as likely to spur unrest elsewhere behind the Iron Curtain. Now, Moscow may worry that a “color revolution” in Belarus could encourage other neighbors to loosen ties.

There are also differences between then and now.

Resistance to a Soviet assault against Poland might have been strong. Poland had long struggled for independence. Protests were led by workers, not just urban elites. The Catholic Church and Solidarity were resilient centers of opposition. Resistance in Belarus might be weaker.

A second difference may be Moscow's vulnerability to sanctions. In the early 1980s, the USSR was largely isolated from the global economy except for budding energy sales to Europe. Today Western sanctions could have a more powerful impact on Russia's economy, as shown by the pain inflicted by Western financial sanctions imposed in 2014.

A third difference may be the vigor of Western support for Poland. In part because it was seen as European and diasporas were large and organized, the West backed the opposition. It augmented short-wave radio broadcasting, and the CIA-funded Solidarity media. President Reagan publicly took up the cause of Poland's liberation.

Russia could use Zapad-2021 as a feint to deflect eyes from a military move against Ukraine.

Western responses to an increased Russian military role in Belarus could be weaker. An armed assault may lead to a further shift of NATO forces to its eastern and Baltic flanks, or heftier sanctions. But a more gradual or unopposed encroachment might not. Russia and Belarus could say that as Union states they had the right to cooperate.

A fourth difference is how the West can exert influence. In Poland, the West leveraged pillars of civil society that seem weaker in Belarus. On the other hand, the advent of the internet and social media, and deeper Belarusian-EU economic ties (PDF), may offer new sources of leverage.

Zapad-2021 seems aimed in a western and northerly direction, but Russia could also use it as a feint to deflect eyes from a military move against Ukraine. Last spring, Russia began a major buildup of forces on Ukraine's eastern border and in Crimea. Moscow's purpose was unclear but many of the forces remain. The West may respond to any new coercion.

William Courtney is an adjunct senior fellow at the nonprofit, nonpartisan RAND Corporation and was U.S. ambassador to Kazakhstan and Georgia.

This commentary originally appeared on The Hill on September 11, 2021. Commentary gives RAND researchers a platform to convey insights based on their professional expertise and often on their peer-reviewed research and analysis.