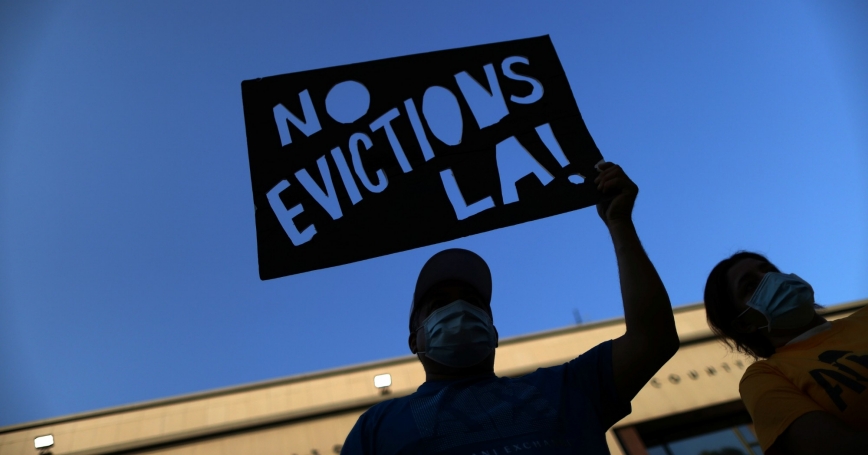 Tenants and housing rights activists protest for a halting of rent payments and mortgage debt in Los Angeles, California, October 1, 2020

The pandemic has battered Los Angeles renters, and a new wave of pain is coming: The state's moratorium on evictions is ending September 30. But this housing crisis doesn't have to turn into a new homelessness crisis.

Californians with incomes below 80 percent of their area's median are eligible to receive funds from the COVID-19 Rent Relief program to cover all unpaid rent and utilities since April 1, 2020. The program can hand out up to $7.2 billion—but only if more renters apply and agencies process applications more quickly. Applications are at housing.ca.gov/covid_rr.

This spring, 49 percent of L.A. County renters owed their landlord money. In July, 36 percent in the larger metro area either missed a rental payment or expressed low confidence in meeting their next month's payment. There's little reason to expect the situation is better now: Job growth in August was the lowest in seven months, and the local unemployment rate is 10 percent—nearly double the national average.

With state and local moratoriums ending next week, the wheels of evictions will begin to turn. By the start of November, landlords will be able to take tenants to small claims court and evictions could begin, needlessly turning what we all hope is a temporary crisis into a years-long housing catastrophe.

Despite the persistent need and looming deadline, funds from that $7.2-billion pot of federal and state aid have been distributed at an alarmingly slow pace. The federal government is now pressuring local governments to speed things up: The Treasury will most likely claw back unspent funds from the state and give them to jurisdictions with better outcomes.

So far, Californians have applied for only about $2.6 billion of available funds, and the state has paid out only $585 million. In the city of Los Angeles, where the L.A. Housing and Community Investment Department coordinates the emergency rental assistance program funds, applications for state rental assistance were inaccessible for months while the city wrestled with funding constraints and an administrative backlog. Applications finally reopened September 1.

Although slow, the state program has been generous. Successful applicants have received, on average, nearly $12,000 per household. But the backlog is disastrously large. Of the $530 million in back rent that L.A. applicants sought before April 2021, only $146 million (28 percent) had been processed as of Tuesday. The delay has raised tensions between renters and their landlords as eviction moratoriums—which provided tenuous protection anyway—are coming to an end.

Rough as it is, California's COVID-19 Rent Relief program is more rational than what preceded it: a messy patchwork of pandemic Band-Aids led by local housing authorities. Some cities took action as early as June 2020; others waited until November. Income eligibility ranged from $33,800 to $82,100 for a household of four. Many cities used a lottery or gave out funds first-come-first-served. Some, such as Inglewood and Pasadena, targeted funds to more-vulnerable populations. L.A. County prioritized ZIP codes with higher levels of eviction risk.

The result was that similar families were treated inconsistently across the county. A family of four with a household income of $30,000 would only be eligible for $1,500 in Glendale, but up to $10,000 in the unincorporated neighborhood of La Crescenta-Montrose. A household of four earning $60,000 would be eligible for assistance in several cities but would get nothing from the city of Inglewood or unincorporated communities like Lennox or West Athens.

As those local programs expired, the state stepped in. But awareness of it remains low among eligible renters, and many have experienced technical difficulties, translation barriers and documentation issues. Others simply moved out of their homes in anticipation of being unable to meet rent obligations. Landlords' reluctance to apply on behalf of tenants has also contributed to low take-up, with reasons ranging from excessive paperwork to a stipulation—which was repealed in June—that required landlords to forgive 20 percent of overdue debt.

Coordination between state and local relief efforts has also created logistical challenges and confusion, because they remain out of sync. The City of Los Angeles set its eviction moratorium to expire one year after the pandemic emergency order is lifted, or May 2023 (whichever comes first).

Without swift and decisive action to coordinate rental relief in the coming weeks and months, Los Angeles could face substantial public costs.

Communities in Los Angeles County that want to keep renters in their homes could pursue other methods of eviction diversion while payments continue to be processed and disbursed. Stay Housed L.A.—a partnership of the city, the county, and legal service providers—is a step in that direction and should be actively promoted to renters seeking assistance. Programs that combine legal assistance with emergency financial aid can be even more effective. In Durham, N.C., 70 percent of families participating in such an eviction diversion program remained in their homes. Landlord-tenant mediation programs, like the mandatory one in Philadelphia, could also keep disputes out of the courts.

Finally, if a Rent Relief applicant is served with an eviction notice, every effort should be made to expedite disbursement, because renters with an eviction record will struggle to secure housing for years to come. This acute crisis need not become chronic.

This commentary originally appeared on Los Angeles Times on September 24, 2021. Commentary gives RAND researchers a platform to convey insights based on their professional expertise and often on their peer-reviewed research and analysis.