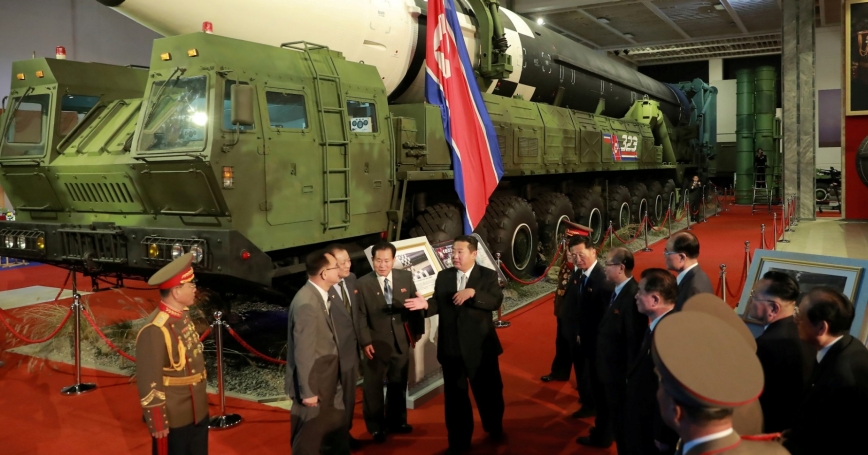 Kim Jong-un speaks to officials at the Defence Development Exhibition, in Pyongyang, North Korea, in this undated photo released on October 12, 2021

North Korea in recent weeks has revved up its cycle of missile provocations—its go-to method of securing leverage against the United States and South Korea in the on-again off-again nuclear negotiations. On September 11, it launched a long-range cruise missile described as a “strategic weapon of great significance”—implying a nuclear component. Less than a week later, Pyongyang test-fired a short-range ballistic missile from a railcar platform. On September 28, North Korea launched a hypersonic missile, yet another “strategic weapon.” The regime also introduced a “missile fuel ampoule,” a capability that allows missiles to be pre-fueled in the factory then stored in a ready-to-launch state for years. Finally, on September 30, the regime test-fired an anti-aircraft missile and boasted of new technologies, including a twin-rudder control and a double-impulse flight engine.

This represents business as usual from Kim Jong-un. That's not to downplay the gravity of the North Korea conundrum, but to point out that the same factors consistently drive Kim's pursuit of these weapons capabilities.

Self-preservation is high on the list. The Kim regime underscores the defensive nature of its nuclear weapons and missile programs. Most recently, North Korea's permanent representative to the United Nations, Kim Song, proclaimed his country's “righteous right [to] self-defense” to develop, test, and produce new weapons, citing the U.S. and South Korean military alliance, Washington's “hostile policy” toward Pyongyang, and the U.S.-ROK joint military exercises “leveled at the DPRK.”

North Korea has the fourth-largest military in the world. On the Korean Peninsula, the Korean People's Army (KPA) outnumbers the U.S. and South Korean forces combined. And yet the KPA is substantially outclassed in terms of technology and logistics, still operating with inferior, decades-old Chinese and Russian equipment. Its major training exercises and massive parades of weapons and troops serve primarily as propaganda for the domestic population and to signal threats to adversaries. But North Korea's military may be ill-prepared should tensions ever escalate into an armed confrontation.

The regime's investment in nuclear weapons and ballistic missile programs is an attempt to offset that capabilities imbalance. By increasing potential costs to the United States and South Korea of escalating tensions, Pyongyang makes it more difficult for the United States to carry out a preemptive strike against the North and enhances the Kim regime's survivability.

The recent spate of weapons tests is also intended to test the U.S. and South Korean governments' resolve. The Biden administration, while indicating it will take a different approach to North Korea than the Trump administration did, has stopped short of issuing any policy specifics. The Kim regime may be trying to provoke the Biden administration to articulate its own “red lines,” which will help Pyongyang determine its next short-term moves.

By increasing potential costs to the U.S. and South Korea of escalating tensions, Pyongyang makes it more difficult for the U.S. to carry out a preemptive strike against the North and enhances the Kim regime's survivability.

The North is also keenly aware that South Korean President Moon Jae-in's term is ending and has used that to its advantage. By dangling the prospect of inter-Korean peace and reconciliation, it has motivated the Moon administration to take a proactive and voluntary role in bridging the Washington-Pyongyang policy divide over the North's nuclear weapons program. For instance, Kim Yo-jong—Kim Jong-un's sister and advisor—lauded Moon's calls for an end-of-war declaration, calling it an “interesting and admirable” idea. Yet, the regime reminded Seoul that certain conditions would need to be fulfilled first, namely fixing Seoul's “double-dealing attitudes,” prejudice, and hostility. The North's restoration of inter-Korean communication lines—55 days after unilaterally suspending the channel in protest of the U.S.-ROK joint military exercises—can be seen as another “carrot” Pyongyang has laid out to entice the Moon administration in its remaining months in office.

Pyongyang's goading seems to have struck a chord among some officials in Seoul. Foreign Minister Chung Eui-yong in his pull-aside talks October 5 with Secretary of State Antony Blinken stressed the need for an end-of-war declaration as a “confidence-building measure” to engage the Kim regime. Chung on a separate occasion said that the time is ripe to consider easing sanctions on North Korea for the sake of engagement—despite the regime's ongoing nuclear development and missile testing. In a similar vein, Seoul's Unification Minister Lee In-young vowed to push for inter-Korean talks before the end of this year.

North Korea's saber-rattling could help it smoke out valuable information from the Biden administration, and it's not creating any setbacks with Seoul.

In other words, North Korea's saber-rattling could help it smoke out valuable information from the Biden administration, and it's not creating any setbacks with Seoul. So “business as usual” might be currently working for the regime.

This leads to a couple of takeaways. First, it underscores the consistency in Pyongyang's strategy and ultimate goals vis-à-vis the United States and South Korea. The regime likely sees its weapons capabilities as an effective deterrent against hypothetical U.S. attacks and a reliable tool to intimidate its regional neighbors.

At the same time, it's possible that North Korea's behavior has remained unchanged because it has not been commensurately and judiciously challenged by the United States, South Korea, or the international community. Unless Pyongyang perceives it will incur greater costs for its aggressions, it will likely continue to rely on nuclear weapons and missile development as its way of communicating with the outside world.

The North Korea problem may necessitate effective punitive measures such as sanctions, diplomatic rebuke, and a calling out of Kim Jong-un's defiant human rights violations. But it also may require consistency and keen awareness of the second- and third-order implications of U.S. policy choices. Progress would likely require greater bilateral and regional cooperation on related issues, such as North Korea's reliance on cyberattacks, illegal ship-to-ship transfers and other illicit revenue streams, and humanitarian challenges.

In just a few days, North Korea will be marking the 75th anniversary of the founding of the Korea Workers' Party. It is possible that Pyongyang will use the occasion to demonstrate additional weapons capabilities to its watchful international audience. This practice, of course, will be “business as usual.” The important question is, How will the United States and South Korea choose to respond to another North Korean provocation?

Soo Kim is a policy analyst at the RAND Corporation and an adjunct instructor at American University. Her research interests include the Korean Peninsula, Russia, Indo-Pacific strategy, near-peer competition, decisionmaking, propaganda, and the intelligence community. She served as an analyst in the Central Intelligence Agency (CIA) and also worked at the Department of Homeland Security (DHS).

This commentary originally appeared on Korea On Point on October 12, 2021. Commentary gives RAND researchers a platform to convey insights based on their professional expertise and often on their peer-reviewed research and analysis.