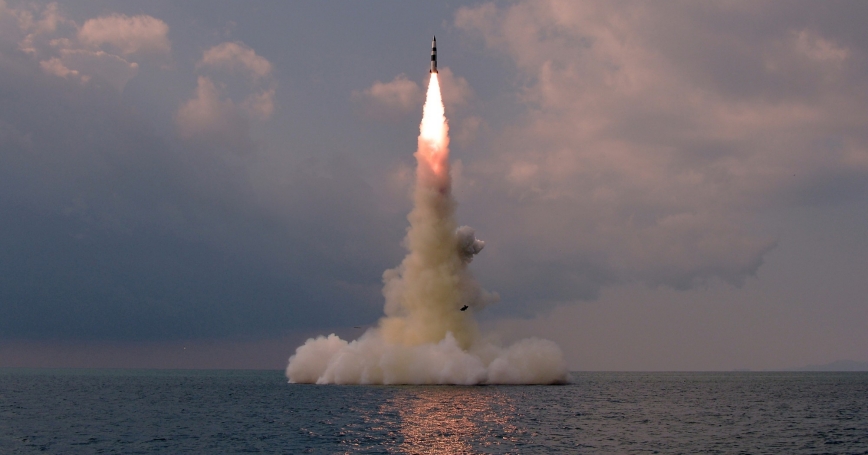 A new submarine-launched ballistic missile is seen during a test in this undated photo released on October 19, 2021

Editor's note: In late September, The National Interest organized a symposium on nuclear policy, nonproliferation, and arms control under the Biden administration. A variety of scholars were asked the following question: “Should Joe Biden seize the opportunity of his administration's Nuclear Posture Review to redefine the role of nuclear weapons in U.S. security planning? How should U.S. policy change to address the proliferation threats that the United States is facing?” The following article is one of their responses.

According to President Joe Biden's Interim National Security Strategy issued in March, the United States “will take steps to reduce the role of nuclear weapons in our national security strategy, while ensuring our strategic deterrent remains safe, secure, and effective and that our extended deterrence commitments to our allies remain strong and credible.” Biden believes “that the sole purpose of the U.S. nuclear arsenal should be deterring—and, if necessary, retaliating against—a nuclear attack.” But many U.S. officials believe that a deterrent threat can be ineffective unless military plans and capabilities are prepared to exercise that threat. A U.S. Nuclear Posture Review (NPR) underway will examine these issues.

Some deterrent threats are just that—just threats, without a plan, capability, and/or will to execute the threat. The fallacy of such an approach has been recognized for centuries: Roman general Vegetius wrote “If you want peace, prepare for war.” Deterrents need to be real, well thought-out, and announced.

To execute the threatened retaliation against North Korea and destroy the Kim regime, the 2018 NPR says that the United States will have to destroy its multiple hardened, deeply buried command-and-control facilities. These are “beyond the reach of conventional explosive penetrating weapons and can be held at risk of destruction only with nuclear weapons,” according to a 2005 National Academies study. Thus while the 2018 NPR did not say so directly, it implied a commitment of a U.S. nuclear attack to destroy the North Korean regime should it use any nuclear weapon against the United States or its allies.…