Defining 'Terrorism' Is the First Step to Defeating It 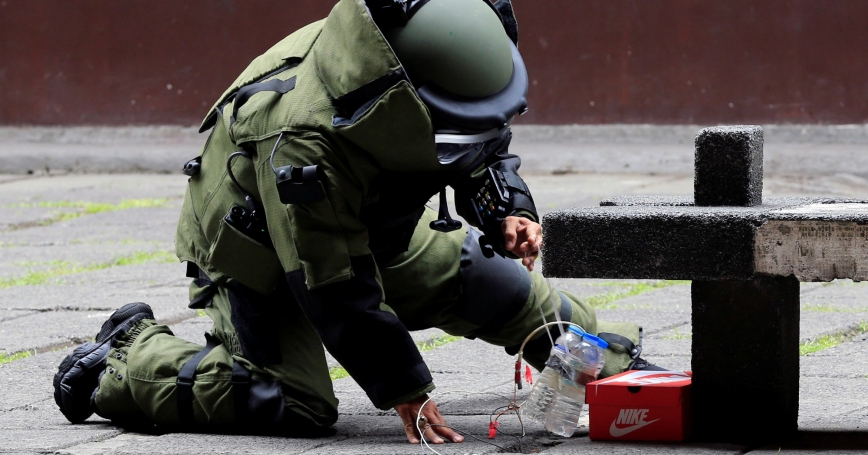 A member of the local Explosives and Ordnance Division tries to install a water diffuser to an improvised explosive device during a bomb drill in a high school in Manila, Philippines July 14, 2017

by Diana Dascalu and Benedict Wilkinson

Growing evidence shows right-wing terrorism is on the rise across Western Europe and the United States. Right-wing groups are becoming increasingly transnational, fueled by easy access to online technologies while drawing on global concerns and grievances, such as migration and climate change. This enables them to tap into a wider audience and to grow both in reach and influence.

In addition, the success of the Taliban in overthrowing the Western-backed government in Kabul has inspired and emboldened jihadist groups worldwide. This is a worrying picture for governments and the public. If acts of terrorism are likely to become more common, it is essential that domestic counterterrorism policies keep pace with the changing nature of the threat so that Western nations can respond effectively. However, Western policy- and decisionmakers still grapple with how to define acts of terrorism and when it is appropriate to bring terrorism charges.

A recent RAND Europe study found that there is continued disagreement among subject matter experts over how different acts of extremist violence, in particular terrorism, should be classified. This lack of consensus, at both the international and national levels, is concerning. It may reveal a gap in counterextremism and counterterrorism policy.

There are longstanding issues with defining an act of terror. Those problems are exacerbated today by numerous factors, including mutations in “traditional” right-wing ideology which complicate the ability of governments to recognize right-wing acts of violence as terrorist acts. These mutations are aided by core characteristics of social media platforms, such as anonymity, the ease with which information is posted and shared, the wide audiences that can be reached, and the inherent difficulties with tracing the source of the information.

An example of this is the recent Plymouth incident in the United Kingdom. A gunman opened fire on August 13 and killed five people. Although evidence suggests that he was motivated by incel ideology, the act has not yet been classified as terrorism, despite numerous voices protesting that that should be the case.…

Diana Dascalu is a research assistant and Ben Wilkinson is a senior research leader in the defense, security, and infrastructure group at RAND Europe.

This commentary originally appeared on The National Interest on November 7, 2021. Commentary gives RAND researchers a platform to convey insights based on their professional expertise and often on their peer-reviewed research and analysis.