Politicians Face Violence and Threats from Voters—and Each Other. Are We Nearing a Civil War? 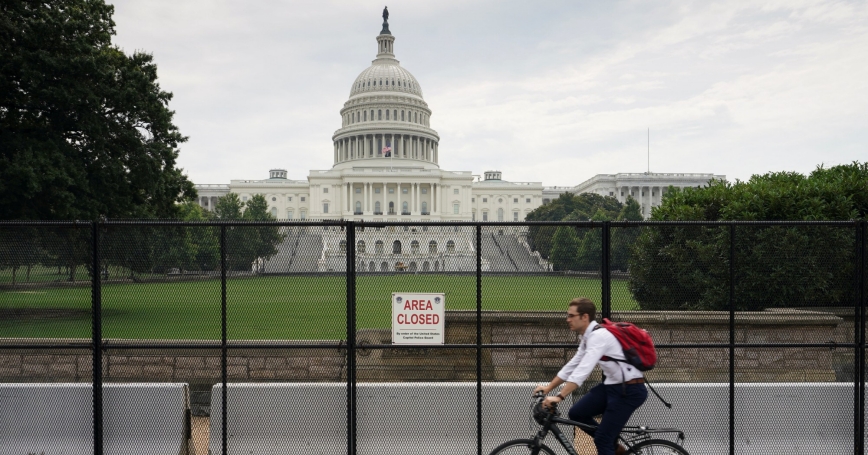 A cyclist rides along fencing surrounding the U.S. Capitol that was erected in the wake of the January 6 insurrection in Washington, D.C., July 8, 2021

Last week, an anonymous caller told a Republican congressman who voted with Democrats in favor of the infrastructure bill that he and his staff should die. On Monday, Twitter added a warning label to a cartoon video shared by a different Republican congressman in which he assassinated a colleague from across the aisle. On Wednesday, a Black Lives Matter organizer threatened “bloodshed” if New York's mayor-elect reinstated a controversial anti-crime police unit. On Friday, an interview was released in which former President Donald Trump defended rioters calling for the hanging of his vice president.

In January, a new member of Congress vowed to come to work armed. Another admitted that, barricaded in his office as a mob coursed through the halls of the Capitol on Jan. 6, he thought he might have to use his own gun to defend himself. Still another member of Congress had a gun pointed at him during a town hall meeting. And one of the 10 Republicans who voted to impeach Trump—fearing for the safety of his wife and children—decided not to seek re-election.

At least one noted American historian is comparing today's pugnacious politics with that of the republic in the years leading up to the Civil War. And indeed, Americans around the country seem to endorse bellicose behavior. According to a survey published on November 1, 18 percent of all Americans (30 percent of Republicans, 17 percent of Independents, and 11 percent of Democrats) believe that “patriots” might have to resort to violence to save the country. Another poll earlier in the year found that 46 percent of people thought the country was somewhat or very likely to have another civil war.

Are they right? Does America's increasingly uncivil behavior mean we are heading toward civil war?

Does America's increasingly uncivil behavior mean we are heading toward civil war?

The signs on the road ahead give cause for concern. America suffers from a list of societal and political conditions that predispose it to violence, and the list seems to be growing longer. At the same time, states that have always defended their sovereignty are more and more defiant of federal authority, which they characterize as increasingly intrusive and tyrannical. The COVID-19 pandemic exacerbates political and geographical differences, leading to social warfare in schools and airports and hospitals over mask and vaccination mandates.

This has prompted renewed talk of secession. But that does not mean that civil war is on the horizon. For one thing, talk of secession is still just talk. The slouching of both political parties to their right and left extremes increases numbers and noise on the far edges. But most people have little time for political posturing and zealots' fantasies.

The bellicose rhetoric and belligerent behavior displayed by and toward some of our elected officials also do not mean a civil war—a military contest between the states—is inevitable or even probable. A more likely scenario is a turbulent era of civil disturbances, armed confrontations, standoffs, threats, assassination attempts, and other acts of political violence—in other words, one that is a lot like the last 200 years of American history.

Indeed, much of what we are seeing now has ample precedents. Those precedents don't make our current circumstances any less ugly, but they do mean that we have been through similar outbreaks before and survived. However, just as civil war is not inevitable, there is no guarantee that the republic will not be fatally weakened or that the union will last—though the tensions we see nationwide seem more likely to produce localized brutishness rather than centralized armed conflict.

As the French political scientist Alexis de Tocqueville noted after touring the United States nearly two centuries ago—when democracy was still an uncommon form of government—what gave the country strength was that Americans had a strong sense of community. Today, the catalog of trends currently eroding that sense of community is depressingly long.

The increased polarization of our political system tops the list. It is a long-term trend, beginning in the 1970s, according to research at the RAND Corporation, that now manifests itself in the demonization of political opponents as primal enemies—tyrants, traitors, terrorists.

Polarization has also contributed to the loss of comity in political discourse, which has turned into crude insults, ad hominem attacks, and the notion that profanity displays authenticity. Contemporary political rhetoric is seemingly intended to inflame passions, at times bordering on criminal incitement. Some news channels and the internet (along with foreign influence operations) stoke the differences, and facts are often irrelevant.

This uncivic culture makes vicious attacks and harassment of public officials common, discouraging ordinary people from entering public service while attracting zealots. And some political campaigns have gone to the dark side, with opaque financing and front organizations to evade campaign rules and tinker with the voting process. The mere advertisement that they are doing so calls into question the legitimacy of elections. It is behavior suitable to the Kremlin, not democracy.

Irreconcilable differences on social issues reinforce the political divide. Differences over racial injustice, abortion, gun control, immigration, and LGBTQ rights increasingly determine whom one is willing to associate with, reinforcing self-segregation along political lines as we group with like-minded friends and partners.

Even within communities, Americans do fewer things together. Church attendance is declining. Membership in civic organizations and lodges has been decreasing for decades. PTA membership has dropped by nearly half of what it was in the 1960s. Bowling leagues have almost disappeared. And the shared national experience of military service disintegrated with the abolition of conscription in 1973.

Meanwhile, self-proclaimed citizen militias—driven mainly by far-right conspiracy theories—have surged since 2008, and especially in the past five years. The militia movement, estimated at around 100,000 members, differs from but overlaps with white supremacist, anti-Muslim, anti-immigration, anti-left, and misogynist groups in a constellation held together by their shared hatred of the federal government.

Americans don't even have a sense of shared history. Is America's story one of a moral crusade dedicated to defending the inalienable rights of life, liberty, and the pursuit of happiness of which we should be proud? Or is it a story of territorial expansion, slaughter, slavery, and imperialism of which we should be ashamed?

Yet for all these breaches, the United States in 1860 was more neatly divided than it is today. For all the implied homogeneity in “red” states and “blue” states, they are more-complex mosaics—in terms of race, ethnicity, and religion—than north versus south ever was. That bodes against a binary breakdown.

And in 1861, the country was primarily separated by a single issue—the survival of slavery. Our situation today is far more fractured—a kaleidoscope of disputes that may promote extremism but impede coalescence into two sides. At the same time, while younger generations are politically more active, so-called independents have experienced the most growth since 2004, and whichever way they lean, their views tend to be less partisan.

Heading into the Civil War, political loyalties were also more local. People looked to their state capital rather than to Washington. The United States had existed for only 73 years (as if only since 1948, from our perspective). The 11 original states to secede had spent an average of less than 50 years in the union. The economy was far less integrated.

And under President Abraham Lincoln, the U.S. Army had a mere 10 regiments of infantry. Today's U.S. military is a global institution, and state National Guard units are fully integrated into the U.S. armed forces. The Pentagon avoids politicization, and it would resist a civil war.

The historical record seems to indicate that the country has a high tolerance for violence without breaking apart.

None of this precludes the real possibility of increased conflict. America has a rich history of violence. It is sobering to review the long list of armed rebellions, riots, attacks by and against striking workers, and massacres of Indigenous people, immigrants, and minorities that mark our history before and since the Civil War. But the historical record seems to indicate that the country has a high tolerance for violence without breaking apart.

Secession without war is also possible. If a handful of southern states voted to secede, would the north go to battle to preserve the union? If Californians wanted out, would South Carolina conservatives fight to keep them in? Or would the attitude in both cases be good riddance? Most likely, though, we won't find out.

Of course, in the current environment, inflammatory events or overreactions could suddenly plunge the country into widespread disorder. A civil war seems unlikely—but the threat of civil wars cannot be dismissed.

Brian Michael Jenkins is an army combat veteran and currently serves as senior adviser to the president of the nonprofit, nonpartisan RAND Corporation. His recent books include Unconquerable Nation, Will Terrorists Go Nuclear?, The Long Shadow of 9/11, and Paths to Destruction.

This commentary originally appeared on NBC News Think on November 14, 2021. Commentary gives RAND researchers a platform to convey insights based on their professional expertise and often on their peer-reviewed research and analysis.