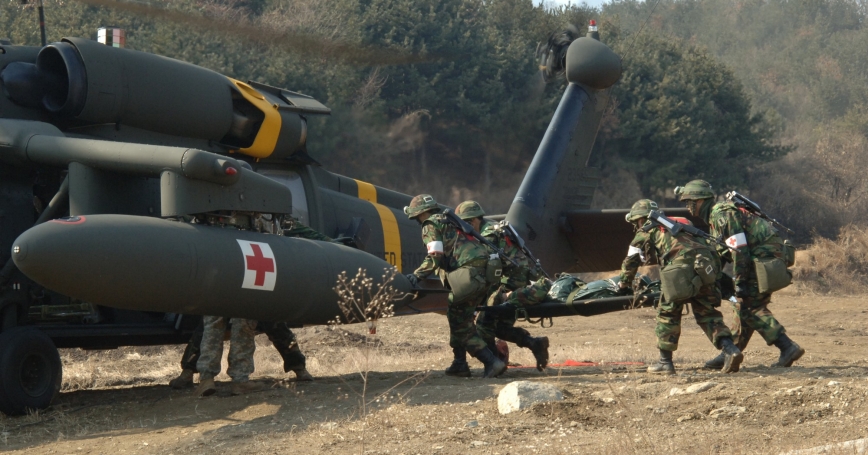 The North Korean military threat to the ROK makes military training imperative. The North Korean Army has almost three times as many active duty personnel as the ROK Army and twice as many tanks, fields some 14,000 artillery pieces and rocket launchers, and threatens to use dozens of nuclear weapons and probably 2,500 to 5,000 tons of chemical weapons against the ROK. Sustained ROK/U.S. military qualitative superiority is required to offset North Korean quantitative advantages.

According to the U.S. Army manual on North Korean Tactics (PDF), North Korea “created a three-part strategy” for war against South Korea: “surprise attack; a quick, decisive war; and mixed tactics.” These strategies make constant and serious ROK/U.S. military training imperative: Any North Korean invasion of the ROK will be a “come as you are” conflict, without pauses for military training.

North Korean leader Kim Jong-un may well fear that the ROK/United States pose an invasion threat to North Korea, but there is little basis for such fear. ROK demographics and political decisions have caused the size of the ROK Army to plummet over the last 20 years from 560,000 active duty personnel to roughly 400,000 in 2021. That number is due to fall another 100,000 or so in the next seven years. Without substantial technological and Air Force support, an ROK Army of these sizes could have difficulty defeating a North Korean invasion and is unlikely to be in any position to carry out an invasion of North Korea. After all, most of the ROK Army combat divisions are infantry forces, forces that would suffer major damage from the North's 8,000 or so artillery pieces along the Demilitarized Zone (DMZ). And an ROK president contemplating invading the North would also have to worry that the North's artillery could cause severe damage to the ROK and to the ROK civilian population in and north of Seoul, as shown in some detail in a 2020 RAND study and a 2019 RAND study. ROK/U.S. air forces could reduce this artillery threat over time, but may have challenges in doing so if North Korea targets the small number of ROK combat airfields with special forces and nuclear, biological, and chemical weapons—a prime example of North Korean “mixed tactics.” If the ROK/U.S. forces tried to fight through the cream of the North Korean Army along the DMZ, Chinese forces could pour into North Korea and potentially seize Pyongyang before ROK/U.S. forces could reach it. In a 2018 RAND study, I found that the ROK/U.S. forces might have some success in an invasion in the aftermath of a North Korean government collapse. But even then they would have great difficulty stabilizing North Korean territory given the lack of preparation for such an imposed unification, as I described in a 2013 RAND study. The result could well be a Pyrrhic victory that no ROK or U.S. government would want.

North Korean leader Kim Jong-un may well fear that the ROK/United States pose an invasion threat to North Korea, but there is little basis for such fear.

The major ROK/U.S. military exercises that North Korea complains about each year are the broad, theater-level exercises done in the spring and summer. Yet those exercises involve little or no field training: ROK/U.S. combat forces are not maneuvering in the forward area and are not firing rifles or tanks or artillery. These are “command post exercises” which are fought using software on a computer. The purpose of these exercises is to train headquarters military personnel in their responsibilities should war happen and to test the viability of existing war plans. These exercises are particularly critical for U.S. military personnel because many of them are assigned to Korea for only one year. Thus, a major effort is required to train newly arriving U.S. personnel every year. Is North Korea really terrified that ROK/U.S. computer simulations will somehow defeat the North's real military forces?

If the ROK/United States accept the North Korean demands to stop their defensive military training exercises, the ROK/U.S. military would become much less able to defend the ROK. By analogy, consider what would happen if the leaders of several other countries came to the ROK president and demanded that he stop the training of the ROK soccer team so that the other countries would have a better chance at a soccer medal in the 2024 Olympics. And what if the other leaders refused to stop the training of their own soccer teams? With no training for its team, the ROK would be guaranteeing failure in the 2024 Olympics. How would the ROK people feel about such a development? And yet the risks of stopping ROK/U.S. military training would be far greater, especially since North Korea has not offered to end its military training exercises.

So why does North Korea make such a big deal about stopping the ROK/U.S. military training exercises? Because the North Korean explanation lacks credibility, we must turn to North Korea's objectives to answer this question. In particular, North Korea continues to call for Korean unification, and in doing so the North clearly means unification under North Korean control. The best strategy I have seen for North Korea achieving this objective appears as part of final instructions that Kim Jong-il reportedly sent to his son Kim Jong-un just two months before the elder Kim's death. In this document, Kim Jong-il said:

If the United States abandons the ROK and removes its forces from the ROK, North Korea appears to perceive that it will then be in a position to militarily dominate the ROK. This will be especially true if ROK forces have been weakened by a lack of military training exercises. While most U.S. experts dismiss the possibility of North Korean dominance, polls by the Korea Institute of National Unification show that already roughly a plurality of the ROK population perceive that North Korea has superior military capabilities to the those of the ROK. Such perceptions could give North Korea serious leverage in a confederation with the ROK.

The ROK/United States may need to do a better job of responding to North Korean propaganda.

The ROK/United States may need to do a better job of responding to North Korean propaganda. When examined in more detail, the North Korean complaints about ROK/U.S. military training failed to reflect that North Korea is the country which trains its military forces for invasion of the ROK, and not vice versa. ROK/U.S. military exercises are a critical component for strengthening the ROK/U.S. defensive alliance and for dealing with the North Korean invasion threat. In a theater where the North Korean strategy focuses on surprise, rapid conquest, and integration of weapons of mass destruction and massive special forces, the ROK/United States might be unwise to curtail their military training exercises any further.

Bruce W. Bennett is an adjunct international/defense researcher at the RAND Corporation.

This commentary originally appeared on Korea on Point on November 24, 2021. Commentary gives RAND researchers a platform to convey insights based on their professional expertise and often on their peer-reviewed research and analysis.