Taiwan Is Safe Until at Least 2027, but with One Big Caveat 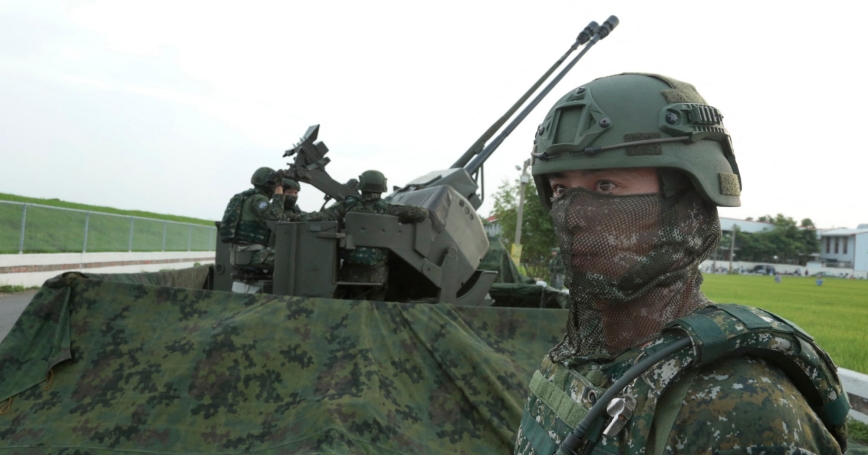 Taiwan Air Force during annual exercises designed to prove the military's capabilities to repel a Chinese attack in Chang-Hua, Taiwan, May 28, 2019

Six years. That is how long Taiwan might have left before suffering a Chinese military attack. At least that was the estimate according to outgoing commander of U.S. Indo-Pacific Command, Admiral Philip Davidson, back in March during open Congressional testimony.

Since then, observers have seized on Davidson's comments—which apparently reference the 100th anniversary of the founding of China's People's Liberation Army (PLA) in 2027 as an event worth celebrating with the conquest of Taiwan—to support their respective positions on whether Beijing is poised to make a dangerous move soon.

For those aligning with Davidson's view, the unprecedented number of warplanes challenging Taiwan in its air defense identification zone, nearly 150 over the first few days of last month, is the latest proof that something is afoot.

For the deniers, it is easy to explain away the recent air incursions as simply being part and parcel of Beijing's general uptick in military assertiveness aimed at deterring further deepening in U.S.-Taiwan relations.

There are good reasons to believe that Davidson's prediction is a tad bold.

Although Chinese President Xi Jinping clearly seeks to bring Taiwan to heel, and by force if necessary, he also continues to promote “peaceful reunification” as Beijing's preferred means. Xi likely would have toughened up his language by now if he thought war was a real possibility. Rather, Xi has moved to quiet speculation of a potential attack by tamping down rumors on Chinese social media that Beijing has mobilized PLA reserves and instructed civilians to stockpile food.

Is it possible Xi is plotting a sneak attack? Sure, but thus far, there is no evidence that he is, and what we do know speaks to the contrary.

Is it possible Xi is plotting a sneak attack? Sure, but thus far, there is no evidence that he is, and what we do know speaks to the contrary—a wait-and-see approach in hopes that diplomatic, economic, and military pressure on Taiwan will result in the China-friendly Kuomintang (KMT) winning the next presidential election in 2024.

Additionally, Beijing is yet to update its Anti-Secession Law from 2005, suggesting that Taiwan, contrary to most Western analyses, has not been a top priority. Xi has typically omitted mention of “Taiwan” in major Communist Party speeches. According to one such speech given to top cadres in January, Xi focused on modernization and socioeconomic development goals rather than dealing with the Taiwan problem.

Xi also has to worry about the PLA's ability to successfully conduct an amphibious landing invasion of Taiwan. Amphibious landings are notoriously tricky to pull off—see the British and the Falklands—and the PLA in the past has exhibited deficiencies in critical areas such as strategic airlift, logistics, and antisubmarine warfare, among others.

To be sure, China's military restructuring in 2016 to a joint concept of operations and feverish expansion and modernization of its forces to align with Xi's call for them to achieve “world-class” status by 2049 has probably enhanced their effectiveness. But improved capabilities alone do not necessarily equal greater competence on the battlefield, especially for a military that has not fought a war since 1979 against Vietnam.

It is also fair to note that as egregious as Chinese behavior versus Taiwan has been over the last few years, Beijing has actually pulled its punches compared to what it could have done by now. For example, during the 1995–96 Taiwan Strait Crisis, Beijing lobbed ballistic missiles near Taiwan—a highly provocative measure that it is yet to repeat.

China has also decided to leave the Economic Cooperation Framework Agreement, inked in 2010 under Taiwanese President Tsai Ing-wen's predecessor from the opposition KMT, Ma Ying-jeou, intact despite Taiwan's refusal to reaffirm One China under the so-called 1992 Consensus.

Termination of the ECFA would place significant economic pressure on the island. Broadly speaking, one would expect to see Beijing significantly turning the screws on Taipei in all facets prior to any type of last-ditch military attack. That has not been the case up till now.

As egregious as Chinese behavior versus Taiwan has been over the last few years, Beijing has actually pulled its punches compared to what it could have done by now.

All of this is good news for Taiwan's security through 2027. But there is one potentially enormous caveat. If Tsai's current and tremendously popular vice president Lai Ching-te, also known as William Lai, becomes the nominee of the Taiwan-centric Democratic Progressive Party for the presidential election in 2024, and if he wins office, then the odds of China taking military action against Taiwan will only grow.

Beijing has referred to Tsai as a separatist and secret independence supporter, which is bad enough. But were Lai to win the presidency, then Beijing would be contending with a leader who, as premier in 2018, publicly stated that he was a “Taiwan independence worker.” Having such a man in office could very well push China toward military action.

That said, much can happen between now and 2024, and we should resist jumping to lazy conclusions. In the meantime, Taiwan would benefit from additional U.S. support to enhance deterrence against China. Taipei would further benefit from American reassurances to China that Washington has no plans to encourage or recognize Taiwan independence.

In its first year in office, the Biden administration has effectively implemented this approach.

This commentary originally appeared on Nikkei Asia on November 10, 2021. Commentary gives RAND researchers a platform to convey insights based on their professional expertise and often on their peer-reviewed research and analysis.