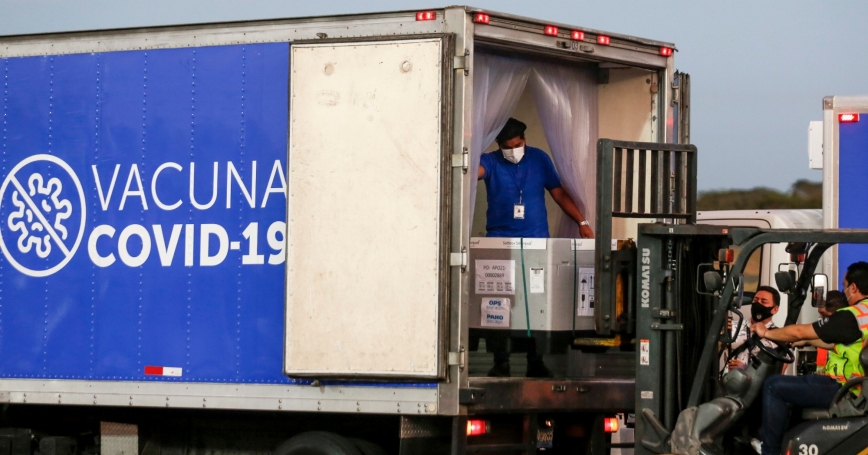 It is now well understood that many of the worst famines in the world have been due to poor distribution of existing food supplies. The world faces a similar challenge today with vaccines—a challenge the United States is well suited to meet, though it has not—not yet. Once COVID-19 vaccines were developed, not enough was done to ensure that much of the global population got vaccinated. Rich countries continue amassing more vaccines than they need, even after accounting for the recent Centers for Disease Control and Prevention recommendation that all eligible adults get a booster shot. As a result, large swaths of the global population have become a human petri dish in which the virus multiplies and mutates, giving rise, most notably, to the Delta variant, and possibly Omicron as well. While rich countries have taken steps to address vaccine inequity, and the United States, though late to start, has led the way in pledging over a billion doses to less-vaccinated low-income countries, the delivery of these vaccines has been slow. For instance, U.S. deliveries have amounted to around 275 million doses—one-quarter of what has been pledged.

The United States has played a leadership role in previous outbreaks, such as Ebola. It could play a similar role now to help consign the current pandemic to epidemic status. President Joe Biden's special envoy for global COVID-19 response recently left her position—it is critical that a replacement is soon found. A high-profile envoy, if appropriately empowered and resourced, could play an active role in rallying other countries to pledge more vaccines and follow through on their commitments. The envoy could coordinate with global organizations, such as the World Health Organization, and help address challenges faced by initiatives such as COVAX to facilitate the delivery and administration of vaccines, as well as work to make treatments more widely available.

The humanitarian reasons for the United States taking global leadership on COVID-19 are obvious in the hundreds of thousands, or even millions, of potential lives saved. But there are self-interested reasons, too: Vaccinations minimize the chances for further mutations like Delta and Omicron, which prolong the pandemic; and while China continues to actively parlay vaccine diplomacy for geopolitical advantage, the United States has been slow to do so. The Biden administration would seem to be on solid political footing should it step up American involvement in global pandemic efforts. A recent survey conducted by the RAND Corporation, even before the rise of Omicron, shows that two-thirds of Americans agree that the United States should send extra vaccines to other countries. And nearly 60 percent of those surveyed agreed that if the United States does not help to fight the spread of COVID-19 in other countries through vaccine or monetary support, it will put the United States at risk. Such broad support is remarkable during these politically polarized times.

While rich countries have taken steps to address vaccine inequity, the delivery of these vaccines has been slow.

Continued shipment of vaccine doses is crucial to containing future mutations. However, the poor vaccination rates in some countries seem to result from a complex set of other reasons, including poor public-health infrastructure and vaccine hesitancy. Issues of logistics and distribution have plagued receiving countries. The rich countries could, therefore, provide logistical support and equipment such as syringes and refrigeration units, which would help ensure there is enough time before vaccine expiry that whatever doses are received can be administered properly.

In the face of shortages, emerging economies are developing their own vaccines. The United States could support these efforts by sharing technical know-how and scientific support, which could increase vaccine supply while further healing some of the geopolitical wounds caused by the pandemic. Easing export restrictions on critical vaccine components and partnering with local firms could also help increase the manufacturing capacity in developing countries…

Krishna B. Kumar directs international research for the nonprofit, nonpartisan RAND Corporation, and the Pardee Initiative for Global Human progress at the Pardee RAND Graduate School.

This commentary originally appeared on The National Interest on December 28, 2021. Commentary gives RAND researchers a platform to convey insights based on their professional expertise and often on their peer-reviewed research and analysis.