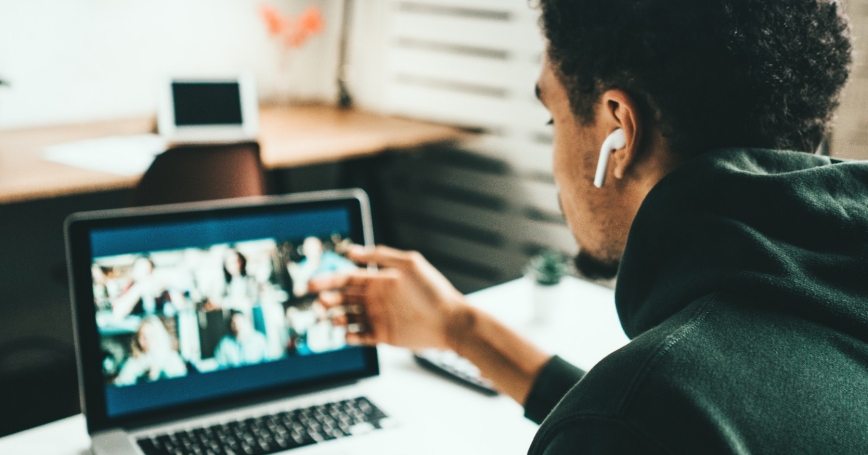 Is there a relationship between historically redlined neighborhoods and COVID-19 vaccination rates? How has the pandemic affected incarcerated people? Why do some communities have less access to health care?

Those were among the public policy questions that teams of students from three historically Black colleges and universities tackled as part of Hacking Equity. This virtual 'hackathon' competition was hosted by the RAND Corporation and the Pardee RAND Graduate School, in partnership with the Atlanta University Center Consortium (AUCC).

For three weeks in October and November, undergraduates from Clark Atlanta University, Morehouse College, and Spelman College teamed up with Pardee RAND doctoral students to explore how vulnerable communities have fared during the pandemic and envision policies that might produce a more equitable recovery. RAND researchers served as mentors, coaching the teams on how to combine datasets and tell compelling, data-driven stories. During a capstone event on November 17, six teams presented their processes, discoveries, and policy ideas.

Students were encouraged to draw on their experiences and dive into problems they observed in their communities, and they took that challenge to heart.

Morehouse student Calvin Bell shared that his father had died in prison during the pandemic. Inspired by that story, Bell's team set out to explore the effects of compassionate release programs for incarcerated people.

“The most important thing I learned is how important it is to evaluate an issue at hand in its entirety,” Bell said. “Since we discussed situations that carried significant weight in terms of their lack of equity, we needed to create the appropriate scope, data sets, and recommendations. These are essential steps to not only be a good data scientist, but to be a member of society who wants to lobby for an issue that they care about deeply.”

Other teams also focused on issues close to home, such as the burden of childcare during lockdowns or the inequitable disbursement of federal Paycheck Protection Program loans, which aimed to help businesses prevent layoffs during the pandemic.

Young folks of color became active participants in the work of policy research to address issues that they and their communities care about.

"Young folks of color became active participants in the work of policy research to address issues that they and their communities care about," said RAND senior information scientist Osonde Osoba, hackathon organizer and codirector of the Tech + Narrative Lab at Pardee RAND. "This seems to be one more form of direct representation that can actually make our collective policy systems more responsive to the needs of underserved communities."

“Jhacova made us step up,” said Abdurahaman, a Pardee RAND student. “She got me to move to a higher level. I was truly impressed with the AUCC students on my team, too. The amount of knowledge they have, the potential they have — it's amazing."

The other winning team, The Regulators, established a measure for how punitive state prison systems are, then investigated whether there was a relationship between that measure and COVID-19 outcomes. Khadesia Howell, Keller Scholl, Michael Spurlock, and Nihar Chhatiawala worked on the project. Their mentors were RAND information scientist Li Ang Zhang and operations researcher Toyya Pujol-Mitchell.

Judges were impressed by how the two winning projects used data to inform policy, especially with a social justice lens.

Asya Spears, a Pardee RAND doctoral student and Spelman alumna, helped organize the hackathon and served as a judge. "The winners really captured the goals that we had and the focus that we brought to this hackathon: really innovative thinking, telling strong narratives, and thinking of ways to best use the data we have and to advocate for more data," she said.

All of us are winners when we're working together for solutions.

The hackathon was part of RAND's NextGen Initiative, which aims to strengthen the connection between younger generations and today's most important public policy issues. The event was also designed to complement the Pardee RAND Faculty Leaders Program, which aims to increase diversity in the field of public policy.

The event is “an investment,” said Sinead Younge, a Faculty Leaders alumna who also helped organize the hackathon. She is now the director of the Institute of Social Justice Inquiry and Praxis in the Andrew Young Center at Morehouse College. “We're planting seeds for trees that we may or may never sit under. The fruits of our labor may show up much later.

“All of us are winners when we're working together for solutions,” she said.