Biden's Rhetoric on Ukraine Has Been Quite Moderate. Here's What That Means 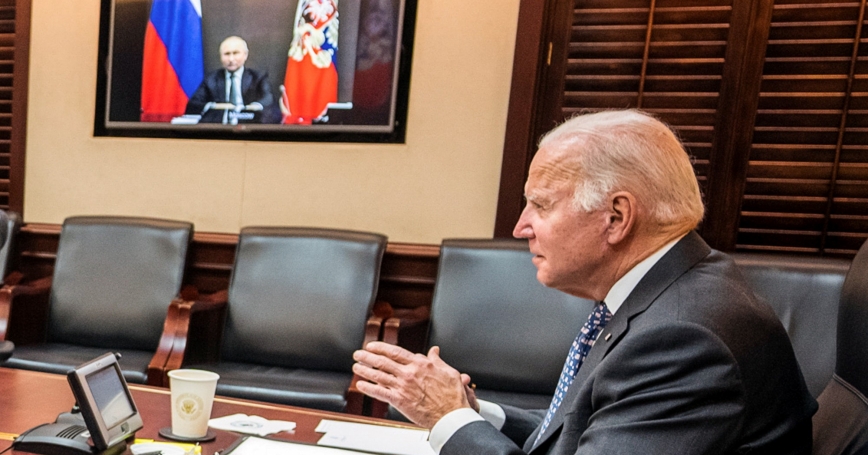 Photo by The White House/Handout via Reuters

Russian and U.S. diplomats held multiple meetings last week to discuss the fate of Ukraine—talks that apparently failed to defuse the crisis. The U.S. government warned Friday of potential sabotage operations in Ukraine, a move that might give Moscow a pretext to mobilize some 100,000 Russian troops near the border to cross into Ukraine.

Russian President Vladimir Putin has not backed down from his threat of war if NATO doesn't agree to end security cooperation with Ukraine and halt expansion into other former Soviet republics. Putin maintains that Russians and Ukrainians are “one people” bound by “spiritual, human, and civilizational ties.” This moral imperative underscores Putin's “duty” to reunite Ukraine and Russia.

My research on rhetoric in foreign policy suggests that when leaders publicly rely on such principled or moral positions—verbal appeals to standards of right and wrong, invoking principles such as historical right, freedom, or democracy—they are more likely to move crises toward military escalation. Conversely, more-restrained, factual language by government leaders moves disagreements toward peaceful outcomes.

When leaders publicly rely on principled or moral positions, they are more likely to move crises toward military escalation.

Will President Biden personally engage in a moral debate about Ukraine? If Putin continues his moral posturing, Biden may feel increasingly pressured to adopt more moral language to justify the defense of Ukraine.

Is Ukraine the Next Cuba?

Representatives of the Russian government have compared the current Ukraine standoff to the Cuban missile crisis. After that 1962 standoff, President John F. Kennedy said that he thought the odds of escalating to nuclear war had been somewhere between one out of three and even.

To date, however, U.S. language surrounding the Ukraine dispute does not track closely with that of previous crises such as Cuba. Biden, as of mid-January, has not delivered a national address condemning Russian aggression, as Kennedy did in October 1962. He has not accused Russia of violating international law, as President Barack Obama did in March 2014 after Russia invaded Ukraine to annex Crimea. The current Ukraine crisis is notable for the absence of presidential moral rhetoric.

Instead, Biden's public statements since December have focused on how further Russian invasion would result in material consequences. He told reporters on December 3 that the United States would make it “very, very difficult” for Russia to invade Ukraine. In a conversation with Putin on December 31, he threatened “severe sanctions” if Russia invaded Ukraine again.

Biden's rhetorical restraint may have important implications for the current conflict. In my research, I show that a heavy reliance on moral language creates intransigent, escalation-prone disagreements in international politics. I found that increased moral language by leaders was associated with higher levels of violence in crises between 1980 and 2015. Moral appeals by both sides led negotiations to break down and violence to break out in several instances during the 1980s Falklands dispute, for instance.

Other scholars have observed related effects. A 2016 study found that strong, principled statements by leaders elicit uncompromising attitudes from foreign audiences. Political psychologists found in a 2019 study that those who see political negotiations in moral terms become more aggressive in those talks. Using language that is more neutral, on the other hand, leaves negotiators room for compromise.

How Moral Language Could Shape This Crisis

Biden has resisted using moral language publicly—but this restraint may not continue. For the United States, which sees itself as a proponent of democratic ideals, moral language comes naturally. Moreover, my research suggests that the use of principled rhetoric by one side can provoke the other side to use moral language as well. Putin's continuing moral appeals might push Biden to respond in kind.

And Biden has plentiful moral appeals at hand. Multiple actors in the crisis have suggested that Ukraine has the right to self-determination, a legal principle guaranteeing peoples the right to freely choose their own sovereignty. White House briefings have reiterated the United States' “unwavering” commitment to Ukraine's sovereignty and “territorial integrity.” NATO noted last week its commitment to the “core principle that each and every nation has the right to choose [its] own path.” It's possible Biden would rely on this principle to frame his public arguments and directly counter Russia's claims.

One-off statements indicate that Biden might perhaps move toward this argument. In a conversation with Ukrainian President Volodymyr Zelensky in December, Biden committed to the notion of “no decisions or discussions about Ukraine without Ukraine.” U.S. Deputy Secretary of State Wendy Sherman echoed this commitment on January 10. Should he choose to do so, Biden could use the principle of self-determination as a basis to weave a sacred story surrounding America's defense of Ukraine.

Moving toward a moral justification might be dangerous, however. Negotiator statements of principle probably contributed to last week's negotiation deadlock. Should Biden choose to double down on these principles in public statements, this type of moral rhetoric might provoke Putin to defend his professed principles to save face. And, the research suggests, this language might prompt Russia to justify further military aggression. It could also constrain the ability of either leader to compromise during further negotiations.

The language political leaders use to frame a conflict can set boundaries around what is open to negotiatin.

Moral language is not the only factor driving escalation, of course. NATO's uncompromising position, Ukraine's preparations to defend itself, and threats of economic sanctions from the West—any or all of these factors may affect Putin's calculations in the days and weeks ahead. Still, the language political leaders use to frame the conflict can set boundaries around what is open to negotiation. Moral rhetoric on both sides could inadvertently trap both parties into uncompromising, principled positions. In short, it could push the United States closer to war.

This commentary originally appeared on The Washington Post Monkey Cage Blog on January 18, 2022. Commentary gives RAND researchers a platform to convey insights based on their professional expertise and often on their peer-reviewed research and analysis.