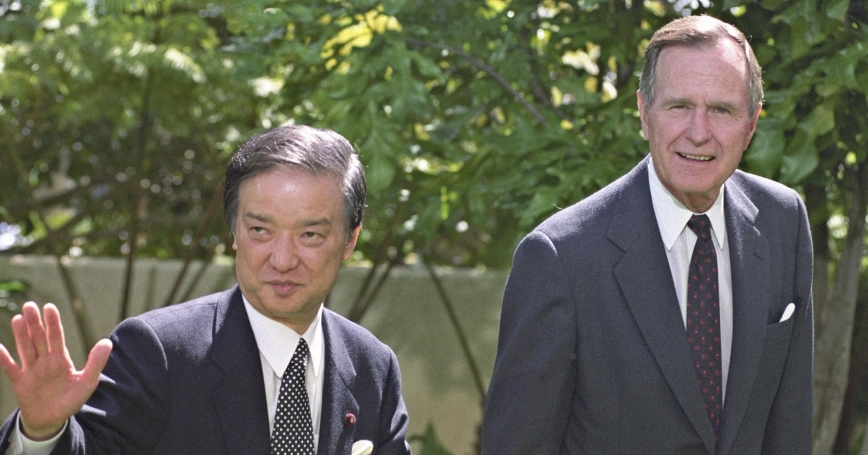 A Japanese politician who played an important part in the history of U.S.-Japan relations died recently, and chances are you've never heard of him. Kaifu Toshiki was Japan's prime minister from 1989 to 1991, a critical time in U.S.-Japan relations as the world was transitioning from the Cold War to the fog that lay beyond. His administration, which became consumed by the Gulf War, carries more importance for the current state of the U.S.-Japan alliance than it is often given credit.

Kaifu was the first prime minister born in the Showa Era, the period stretching from 1926 to 1989. When he became premier in August 1989, he was quite frankly, an unlikely choice. Not only was he from the smallest faction in the LDP (Komoto faction), he was not even its head; rather, he was third in line in terms of seniority. Moreover, he did not have as much experience as his predecessors had before becoming premier; his only relevant cabinet experience was being a two-time education minister.

And yet, he offered his party the promise of a fresh start. This is because prior to his unlikely rise to the premiership, his LDP had been rocked by a stocks-for-favors scandal, a sex scandal that pushed Kaifu's immediate predecessor from office and an unpopular consumption tax that led to a historic defeat of the LDP in the July 1989 Upper House elections. Kaifu, youthful at 58 and known for being nonconfrontational, was not connected to any of these issues. Party elites saw Kaifu as able to lead a caretaker government until the public was in a more-forgiving mood. There was no expectation that he would push Japan in new directions.

Kaifu's administration carries more importance for the current state of the U.S.-Japan alliance than it is often given credit.

But history had other plans, and Kaifu stepped into his role in ways no one expected, even leading his party to a massive electoral victory in the February 1990 Lower House election. Domestically, his approval ratings were the highest of any postwar leader up until that time. Abroad, he concluded Structural Impediments Initiative talks with U.S. President George H.W. Bush and walked tall with other global leaders at the 1990 G7 Summit. And then, at the zenith of his popularity, the Gulf War broke out.

History, which has not been kind, has defined Kaifu's legacy by his response to the Gulf War. Known for being dovish in nature, the usual characterization of his response is one of weak leadership, doing “too little, too late,” and relying on “checkbook diplomacy” in sending money instead of Japan's Self-Defense Forces (SDF) to support coalition efforts.

While it is fair to say that Kaifu failed to leverage his political popularity to break political deadlock, and that he did not show the decisiveness that was required of a leader in that moment, he faced a crisis that none of his predecessors had faced before. Nevertheless, there are several precedents that transpired during his tenure that helped lay important groundwork for where the alliance is today. It is important to acknowledge that the debates started during his administration helped jumpstart a range of alliance conversations that are just as relevant today. This is not to suggest that Kaifu should be credited for the state of the alliance today, but only to acknowledge that he began conversations on complex security issues that continue to evolve and develop.

For example, his administration's struggles to find a way to contribute to the Gulf War opened numerous discussions about how Japan could support military operations overseas in ways that did not contravene Japan's constitution. It also forced the government to confront sensitive questions about the SDF's rules of engagement, command and control, and roles and missions.

Three decades later, Japan still faces limitations on its ability to use force overseas, and politicians continue to debate what types of SDF operations and roles are allowed. The Kaifu administration also began to examine complex legal debates about collective self-defense and what legal interpretations are necessary for dispatching the SDF overseas.

In the years since, leaders like Koizumi Junichiro and Abe Shinzo have built on these foundations, further fleshing out Japan's legal frameworks and broadening the SDF's roles and responsibilities (PDF).

Additionally, some of the conversations heard today about Japan's international responsibilities and consequence to international society can be traced to debates that began during the Kaifu administration. The harsh criticism of Japan from the international community is what is remembered most by Japanese policymakers. As I argued in my dissertation, this criticism was received loud and clear by the relevant stakeholders in Japan. Widespread soul searching followed the “trauma” of the Gulf War, helping awaken a whole generation of politicians and bureaucrats to the need for Japan to play a more-proactive role in international society.

While today it is common to hear about Japan wanting to make proactive contributions to peace, these opinions can be traced back to the debates begun during the Kaifu administration. We take for granted that Japan today sees a positive role for itself as an active member of international society, but this was not always the case.

And the end of the Cold War left Japan—like many U.S. allies—adrift. While Kaifu's response to the Gulf War leaves some elements to be desired, he does deserve credit for beginning many contentious internal discussions about the role Japan should play in a post–Cold War world.

Kaifu may not be as well known in the United States as other recent leaders like Abe or Koizumi, but he is consequential. While history has painted him in a critical manner, the discussions begun during his tenure have proven important for the trajectory that the U.S.-Japan alliance has taken. His passing, therefore, could present an opportunity to reflect on one of the lesser-known personalities of the U.S.-Japan relationship.

This commentary originally appeared on The Hill on January 22, 2022. Commentary gives RAND researchers a platform to convey insights based on their professional expertise and often on their peer-reviewed research and analysis.