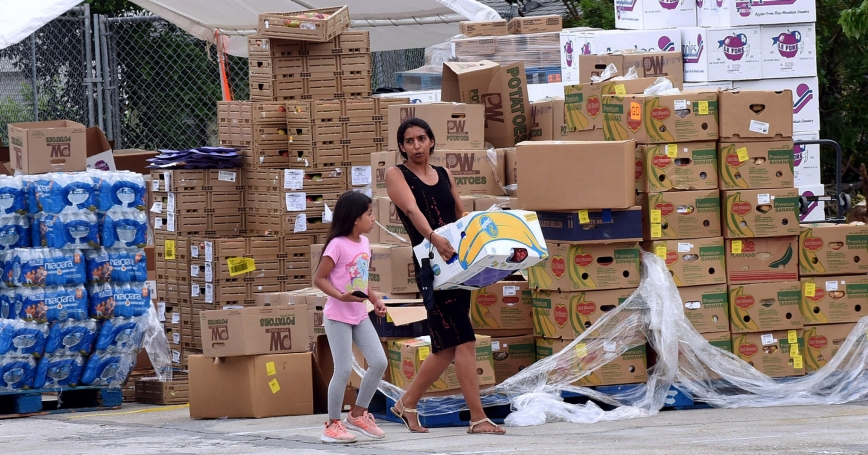 A woman with a child carries a box of food assistance at a mobile food drop event in Orlando, Florida, April 6, 2020

The expanded child tax credit lapsed in December as the cost of President Joe Biden's spending plans became a sticking point in Congress. Yet amid the debate over whether its success in reducing poverty is worth its large price tag, many are missing a crucial feature: It was uniquely well-designed to address the increasingly precarious economic reality that millions of Americans experience.

Government programs tend to put people in boxes: elderly, disabled, veteran, unemployed, single parent. The most problematic of these labels often overlaps the others: poor. Most programs are means-tested, based on reported income during application, to direct money to those we perceive as the neediest.

But incomes in the United States can actually vary a lot from month to month: Swings as large as 50 percent are not uncommon. This affects people in high and low income strata, with potentially severe consequences for those without the savings to smooth out the peaks and valleys. Shift workers—in sectors such as retail or leisure and hospitality, which together account for 1 in 5 U.S. jobs—must contend with unpredictable (PDF) schedules. On-demand contract workers such as rideshare drivers and Instacart shoppers face similar uncertainty. Few get paid time off for an emergency or illness. If they don't or can't work, the money stops coming.

Low incomes, volatile incomes, and poverty risk all correlate with child poverty. For most children, the poorest their parents will ever be is on the day they are born.

This income volatility means families are continually rising above and dipping below the federally defined poverty level. Researchers at the Census Bureau (PDF) found that over four years, one-third of Americans were poor for at least two months, but less than 3 percent were poor the entire time. Half of all spells in poverty ended in less than a year, and the long-term poor never made up more than 10 percent of those in poverty. A separate study examining tax data found that more than 4 in 10 people spent at least one year in poverty between 2007 and 2018.

For children, the consequences of volatility and poverty (PDF), even for intermittent periods, can be acute and lasting. For example, children's test scores are lower in the days just before food stamp benefits arrive (when the household is most likely to be short on food), and children whose parents were laid off during their childhood earned less as adults.

The question, then, is how best to inoculate toddlers from these effects. Income volatility makes for a rapidly shifting target. Anywhere from 30 percent to 40 percent of Americans could become poor, but aren't poor this month. Similarly, many who are poor this month or this year won't be poor in the next. Poverty and need can strike quickly.

Social programs, by contrast, are sluggish. Just ask anyone who waited months for their unemployment claim to be processed in 2020, or widows trying to claim Social Security survivors benefits while the field offices have been closed. Indeed, applying for and maintaining public benefits is so onerous that it has become its own subject area of social science research, called “administrative burden.”

Last year's child tax credit expansion, an experiment that lasted from July through December, offered a pioneering solution: Pay part of the benefit monthly, in advance, to all parents. In effect, it was an acknowledgement that the government can't get money to children in need as fast as the labor market creates them. The maximum monthly benefit was $300 per child, so the average paid out to families was close to $400—not enough to live on, but just enough to insulate children from their parents' income volatility.

Reaching all children in poverty or at risk entails a tradeoff: A lot of money goes to families that aren't in acute need.

Reaching all children in poverty or at risk entails a tradeoff: A lot of money goes to families that aren't in acute need. But in the case of the child tax credit, this was happening before the expansion, too. More than 98 percent (PDF) of children in families with annual incomes ranging from $75,000 to $500,000 received the credit—an eligibility design that took on the costs of broad coverage without delivering the benefits that the expansion and monthly advance payments provided.

All policies have tradeoffs. These can be measured in dollars, but also in efficacy. The expansion to the child tax credit was modern in that it recognized how volatile incomes can undermine the effectiveness of anti-poverty measures. The United States can retreat from a particular solution, but not from that problem.

Kathryn Edwards is an economist at the nonprofit, nonpartisan RAND Corporation.

This commentary originally appeared on Bloomberg on February 8, 2022. Commentary gives RAND researchers a platform to convey insights based on their professional expertise and often on their peer-reviewed research and analysis.