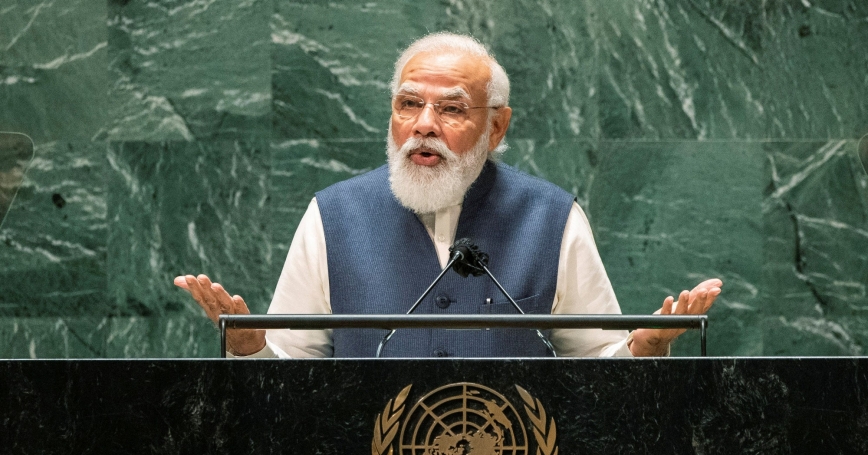 Since assuming office in 2014, Prime Minister Narendra Modi has turned India into a strategic player with a highly effective foreign policy. Modi has done this by shifting New Delhi away from its old strategy of strict nonalignment, paving the way for stronger ties with great and middle-sized powers. Under his watch, India has embraced the United States and its Indo-Pacific strategy in an effort to balance a rising China and keep the region open and free from coercion.

Modi has also successfully faced down his country's archrivals, Pakistan and China. In 2020, Modi instructed the Indian Army to stand its ground amid lethal border clashes with China, and India even regained some lost territory. In 2019, after a Pakistan-based terrorist group's attack in the erstwhile state of Jammu and Kashmir, India retaliated in measured fashion—demonstrating resolve while preventing escalation. Notably, there have been no major terrorist attacks involving Pakistan-based groups since the incident.

Building on these successes, however, may prove difficult for Modi. Pakistan and China have strengthened their cooperation. New challenges are emerging from the security vacuum Washington left behind in Afghanistan. Other fires to put out include a rapidly drifting Indo-Russian relationship and the military coup in neighboring Myanmar that has drawn that country's regime closer to Beijing.

Since early last year, India and Pakistan have maintained a fragile cease-fire along the Line of Control separating India- and Pakistan-controlled Kashmir, but the recent Taliban takeover of neighboring Afghanistan presents a new cause for worry. Pakistan-based terrorist groups, such as Jaish-e-Mohammed and Lashkar-e-Taiba, now have a friendly regime in Afghanistan that might look the other way or provide a safe haven as these groups hone their plots against India. Islamabad publicly condemns these terrorist groups but for decades has quietly allowed or even supported their operations. New Delhi should expect a magnified security threat coming out of Afghanistan, possibly with encouragement or at least willful ignorance from Pakistan.

New Delhi should expect a magnified security threat coming out of Afghanistan, possibly with encouragement or at least willful ignorance from Pakistan.

But China has been giving Modi the greatest headaches—in multiple areas. Most immediately, after 2020 saw the worst fighting between the two countries since 1967, China is set to dig into its positions along the disputed border for a third winter by beefing up military infrastructure, including roads, bridges, and airfields, as well as the logistics to deploy additional troops quickly if necessary. India has responded in much the same way.

In July 2021, Chinese President Xi Jinping visited Tibet—the first Chinese leader to visit in 30 years. The trip underlines Beijing's efforts to control and subdue the restive autonomous region but also signals greater interest in shoring it up as a strategic border area. And in October, Beijing issued a new and controversial boundary law, which calls on Chinese citizens to help defend China's borders and authorizes patrol officers to use force if necessary. Most provocatively, the law prohibits the construction of permanent facilities near China's borders—read: in neighboring countries by their own people and governments—without permission from Beijing; it also encourages Chinese citizens to settle in disputed regions. This is a problem not just for India but its neighbors as well. For years, one of India's closest partners, Bhutan, has fallen victim to Beijing's transborder settlement strategy and lost control over parts of its territory. Codifying these Chinese land grabs is likely to make the problem worse. In October, Bhutan and China signed a border agreement that essentially legitimizes recent Chinese expansion—a sign that Bhutan has little or no leverage, even with India by its side.

But the land border standoff is just the tip of the iceberg. From a broader perspective, Beijing has been vying with New Delhi for influence among the smaller South Asian nations—Bangladesh, Bhutan, the Maldives, Nepal, and Sri Lanka—that have traditionally been more or less content residing in India's strategic orbit. Except for Bhutan, all are participating in China's Belt and Road Initiative (BRI), a global investment and infrastructure program. The fear in New Delhi (as well as Washington and other like-minded capitals) is that Beijing is leveraging the BRI to achieve greater diplomatic, economic, and military access to these nations. To Beijing's enormous frustration, New Delhi has rejected participating in the BRI. Indian concerns, however, have not spilled over to its neighbors, causing New Delhi to worry about geostrategic encirclement.

And for good reason: Chinese Foreign Minister Wang Yi has already kicked off his 2022 overseas travel schedule with visits to Eritrea, Kenya, Comoros, the Maldives, and Sri Lanka. In the Maldives, China pledged to help refurbish the airport and maintain the China-Maldives Friendship Bridge—a completed BRI project. Meanwhile, the China-friendly government of Sri Lankan Prime Minster Mahinda Rajapaksa requested that China restructure debt payments related to numerous BRI projects, suggesting Sri Lanka will remain beholden to China for the foreseeable future, even though it sits just off India's coast. Modi was probably watching Wang's visit to East Africa and Comoros closely as well, considering that India's conception of the Indo-Pacific includes the western Indian Ocean and adjacent African littoral. In particular, Wang's visit to Comoros—the first ever by a Chinese foreign minister—underscores Beijing's intent to challenge Indian influence throughout the entire Indian Ocean region.

On yet another front, China is consistently bolstering ties with Pakistan. Of late, this has manifested itself most prominently with the China-Pakistan Economic Corridor, a flagship BRI project comprising roads and energy pipelines. China also reportedly invited Iran, an increasingly important partner for Pakistan, to participate in the project. Pakistan has also facilitated Beijing's interactions with the Taliban, whose main benefactor China has since become. Eventual Pakistani and Chinese diplomatic recognition seems virtually assured, granting Beijing further access to Afghanistan's plentiful natural resources. In a major reversal, and perhaps lubricated by its growing ties with China and Pakistan, Iran is now interacting with the Taliban, too. New Delhi's hesitance to accept the Taliban effectively cedes ground to India's adversaries.

China is also complicating India's plans for geostrategic influence in Central Asia. Last week, Modi met virtually with the leaders of all five Central Asian countries—a first for India. But Xi had already swooped in to upstage him, meeting with them two days earlier. China has numerous BRI projects throughout Central Asia, while Indian projects are virtually nonexistent. And Beijing's security presence is rising there, too. Significantly, China has operated an unofficial paramilitary base in Tajikistan—a longstanding Indian partner—since at least 2016.

India's attempt to gain regional influence by joining the Shanghai Cooperation Organisation, an economic and security organization controlled by Russia and China (and including the Central Asian countries except Turkmenistan), has also been stymied. When Russia sponsored India to become a permanent member in 2017, China responded by shepherding Pakistan in as well, diluting any enhanced influence India might have derived from participating in the group.

New Delhi should be concerned about Moscow's place in the mix as well. Sino-Russian ties are stronger than ever, raising doubts over whether New Delhi can continue to trust Moscow as it did when they were aligned during the Cold War, including against Beijing. Russian President Vladimir Putin's visit to New Delhi in December produced few tangible policy outcomes. Instead, the summit was headlined by Moscow's delivery of its S-400 surface-to-air missile system. India's military is predominantly equipped with Russian and Soviet hardware; New Delhi thus wants to keep this line open. But India should be under no illusions that Russia is willing or able to help it counter China. Indeed, Russia, China, and Iran last month conducted their third joint naval exercises in India's backyard in the Indian Ocean. Meanwhile, since 2015, Russia and Pakistan have been upgrading their ties, with the prospects of a first-ever Russian presidential visit to Islamabad rising quickly. Meanwhile, if Russia invades Ukraine, it will likely put India between its old Russian and new Western partners.

Finally, India's northeastern flank is a mess. The February 2021 coup by Myanmar's military, or Tatmadaw, has caused chaos along a border where India has few palatable solutions. If India ignored the Tatmadaw and called for a return to democratic governance, it would likely cede further ground in Myanmar to China. In December, for example, China transferred a Ming-class submarine to Myanmar. That same month, the Tatmadaw stated it has a special “kinship” with China—and that BRI projects, such as the China-Myanmar Economic Corridor, are a “major priority.” But if New Delhi were to engage the junta in a bid to vie for influence with Beijing, it would risk fanning tensions in India's restive northeastern states—Arunachal Pradesh, Nagaland, Manipur, and Mizoram—where local ethnic groups have ties to and sympathy for ordinary Burmese. Complicating matters even more, India engaging the junta too closely runs the risk of souring the longstanding friendly ties it has with neighboring Bangladesh, where more than 1 million Muslim Rohingya refugees reside as a result of Tatmadaw persecution. To date, New Delhi has decided on limited engagement with the Tatmadaw, but this strategy may be unsustainable.

India's strategic landscape is certainly an increasingly troubled one. Does Modi have a way out?

India's strategic landscape is certainly an increasingly troubled one. Does Modi have a way out? He could continue deepening partnerships with like-minded democratic partners, such as Australia, Britain, France, Japan, and the United States, to help deter and counter China. India's participation in the Quadrilateral Security Dialogue—or Quad—with Australia, Japan, and the United States is an important initiative in this direction. Stronger ties with these countries could also boost India's standing outside its immediate neighborhood, enabling it to compete with China on a more equal footing in places such as East Africa and Central Asia. Participating in the Biden administration's Build Back Better World program, complemented by other nations' infrastructure and investment projects, could help India push back against China's BRI.

However, international strategic cooperation may not keep India from having to make tough decisions to deal with Pakistan, Russia, Iran, the Taliban, and the Tatmadaw. Some sort of agreement with Islamabad on Kashmir is likely needed. India can probably still procure Russian arms even if the two countries' policies are no longer aligned. Relations with Iran are generally positive, but Modi may want to keep tabs on Iranian support to the Taliban and Tehran's deepening ties with Beijing. New Delhi may have to accept Taliban leadership in Afghanistan to stave off a worse fate of ceding influence to Pakistan and China, both of which appear poised to recognize the regime. And in Myanmar, India could prioritize stability in its northeastern provinces over any discussions with the Tatmadaw, even if that means abandoning Myanmar to China.

India lives in a difficult neighborhood, and there are no easy, straightforward solutions. But thus far—and especially under Modi—India has managed its foreign-policy challenges with remarkable effectiveness. With new partners and by making some tough decisions, there is a very good chance that it will continue to do so.

This commentary originally appeared on Foreign Policy on February 4, 2022. Commentary gives RAND researchers a platform to convey insights based on their professional expertise and often on their peer-reviewed research and analysis.