China's Security Contractors Have Avoided the Fate of Russia's Military Contractors, So Far 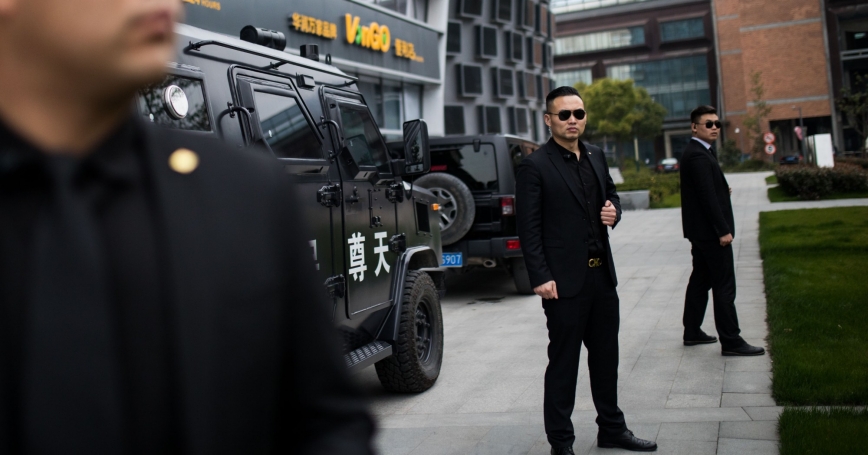 China's approach to private security contractors (PSCs) is much more limited in scope and effects than Russia's use of private military contractors (PMCs). The differences are stark. However, indicators suggest that Chinese planners see benefits in expanding and maturing the country's use of private contractors, which creates the potential for dangerous results for China and the rest of the world.

The distinction between a PMC versus a PSC is the difference between a for-hire military contractor versus a security team that merely protects a single static location, like a military base, embassy, or port. Thus far, evidence indicates that China has engaged solely in PSC activities and has intentionally avoided PMC activities, likely due to a deliberate strategy by Xi to avoid regional entanglements and the type of rogue violence committed by Russian PMCs.

The U.N. High Commissioner for Human Rights has documented Russian PMCs having engaged in “grave human rights and international humanitarian law violations, including arbitrary detention, torture, disappearances, [and] execution.” Notoriously, the Russian company the Wagner Group has been accused of killings, rapes, and sowing cultures of fear as it terrorizes civilian populations and strips a country of its resources. Some analysts have accused Wagner of acting as an umbrella organization for mercenaries rather than as a cohesive corporate PMC. In contrast, Chinese PSCs have focused narrowly on protecting Chinese investments around the world, such as providing security to Chinese-funded construction and infrastructure projects or Chinese embassies and installations.

It is possible that the private military and security sector in China is already on a course to follow a similar evolution as China has in other sectors.

It is possible that the private military and security sector in China is already on a course to follow a similar evolution as China has in other sectors. Thus far, the Chinese approach to security is to legally bar their contractors from carrying weapons, to call local authorities when firepower is needed, and, in some high-threat locations, to outsource security to other countries' armed contractors. In other sectors, such as telecommunications or military systems, first China outsources to foreigners while learning from their strategies and tactics; then China develops its own nascent capabilities while continuing to outsource that which it cannot yet do on its own; until finally China develops an indigenous capability and begins to reduce or sever its foreign reliance.

If this course is already underway in China's military and security contracting sector, then some early changes have already been noted by analysts and researchers. First, China has deployed unarmed contractors across Africa while hiring armed foreign contractors where needed. Second, in 2010, the Chinese government passed a law legalizing PSCs and beginning to “establish (PDF) a regulatory framework for the sector,” and has followed this with government strategies aimed at “safeguarding overseas interests and protecting Chinese nationals, organizations, and institutions.” As one of the largest international investors in infrastructure projects, China is searching for ways to secure its investments.

While Xi has previously preached a strategy of deliberate avoidance of international entanglement, China's actual practices under his leadership have not necessarily matched those stated goals, and his regime's approach to PSCs provides one such example. My colleagues at the RAND Corporation, as well as researchers at other institutions, have tracked and documented China's activities in the PSC sector, most notably across Africa.

Within China, some writers indicate an interest in expanding China's use of private contractors in both scope and geography, and they see opportunity in the U.S. withdrawal from Afghanistan. One Chinese-language article says that China's experience providing security services in Afghanistan—along with China's experiences in Somalia and elsewhere—has built the workforce skills and methods China needs in order to grow these services. The article cites Afghanistan's minerals as a ripe opportunity for Beijing and identifies China's more than 3,200 private security workers overseas as a ready workforce.

China's strategic reluctance to engage in PMC-like activities (à la Russia) may benefit China and be to the rest of the world's advantage. However, if China is progressing towards a more-militarized approach for its overseas contractors, the government may follow a roadmap that is similar to that it has used in other sectors and may encounter pitfalls similar to those encountered by other nations' PMCs. China's approach to date has strategically reduced its risk exposure, and that may change significantly if the Xi regime makes the strategic decision to pivot.

Cortney Weinbaum is a senior management scientist at the nonprofit, nonpartisan RAND Corporation.

This commentary originally appeared on RealClearDefense on March 11, 2022. Commentary gives RAND researchers a platform to convey insights based on their professional expertise and often on their peer-reviewed research and analysis.