State of the Union 2022: Russia's Invasion of Ukraine and Domestic Policy 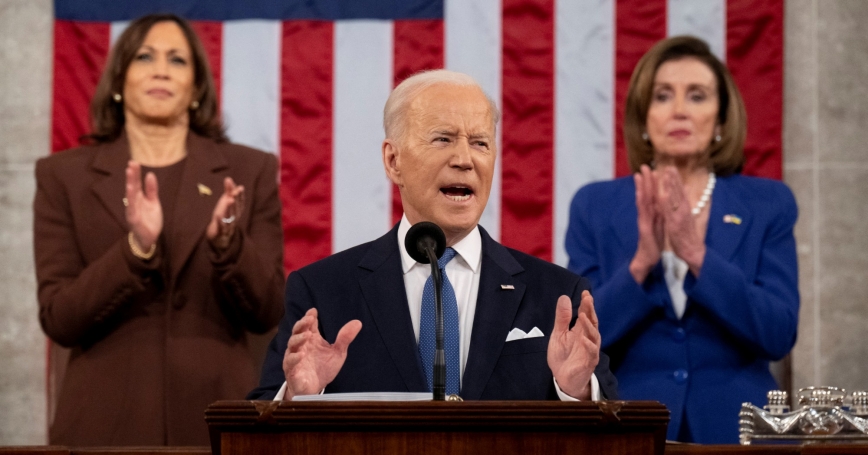 U.S. President Joe Biden delivers the State of the Union address at the U.S. Capitol in Washington, D.C., March 1, 2022

Photo by Saul Loeb/Pool via Reuters

Last night, President Joe Biden delivered his first official State of the Union address, rebuking a revanchist Russia days after its invasion of Ukraine, aiming to turn a page on the COVID-19 pandemic, and covering a wide range of important domestic issues facing the United States.

To develop effective, evidence-based solutions to these problems, policymakers will need to rely on objective and nonpartisan resources. Below are excerpts from the president's remarks, followed by context from RAND research, analysis, and expertise.

“Six days ago, Russia's Vladimir Putin sought to shake the foundations of the free world, thinking he could make it bend to his menacing ways. But he badly miscalculated.

“He thought he could roll into Ukraine and the world would roll over. Instead, he met a wall of strength he never imagined. He met the Ukrainian people.”

RAND researchers who have studied civilian-based resistance in the Baltic states recently wrote about what a prolonged Ukrainian resistance to Russian occupiers might entail. They discussed Ukrainian plans and capabilities, how effective resistance might be, the challenges Ukrainians might confront, and assistance that the international community could provide.

Ukraine has considerable resources and human capacity to raise the costs of a Russian occupation, they wrote, but sustaining a national resistance would "almost certainly require" significant international support.

Elsewhere, RAND experts have studied the concept of will to fight—arguably the single most important factor in war.

“We countered Russia's lies with the truth…”

A popular 2016 RAND publication calls Russia's approach to propaganda “the firehose of falsehood.” As the name suggests, Moscow uses many channels and messages to shamelessly disseminate partial truths or outright lies.

The authors explore why Russia's approach to propaganda is so effective and offer recommendations for how to respond. In short, don't expect to counter Moscow's firehose of falsehood with “the squirt gun of truth.” Instead, put “raincoats” on those at whom the firehose is aimed.

There are too many RAND studies on U.S. strategic competition with Russia to list here, but a good place to start is this recent research primer by senior political scientist Stephanie Pezard, which reviews nearly 60 RAND reports on this topic since 2015.

Our body of research highlights that allies and partners indeed play key roles and represent an important U.S. advantage over Russia, which lacks a similar network. Also, expect the U.S.-Russia strategic competition to be long-lasting. “Russia is likely to remain a U.S. rival until at least 2030,” writes Pezard.

“Let's take on mental health. Especially among our children, whose lives and education have been turned upside down…”

“Let's get all Americans the mental health services they need. More people they can turn to for help, and full parity between physical and mental health care.”

But as President Biden's remarks suggest, efforts to improve mental health in the United States needn't be confined to the classroom.

Because the pandemic has led to elevated rates of anxiety and depression, such reforms would be especially timely. “Policymakers have the opportunity now to cut short the pandemic's long tail of mental illness by taking decisive action,” says lead author Ryan McBain.

“Cut the cost of prescription drugs. Just look at insulin… Insulin costs about $10 a vial to make. But drug companies charge families … up to 30 times more.”

A recent RAND study finds that prescription drug prices in the United States are 2.56 times those in 32 other high-income countries. Brand-named drugs are the primary driver of this disparity.

President Biden mentioned insulin, because it's become a symbol of high prescription drug prices and health care costs in America. In fact, RAND researchers found that drug companies charge more for insulin in the United States than in nearly three dozen other countries. The average price per unit of insulin in America is $98.70. In Japan, it's $14.40. In Canada, it's $12. In the UK, it's $7.52.

“And while we're at it, let Medicare negotiate lower prices for prescription drugs.”

Another recent RAND study models proposed legislation that would allow for the negotiation of U.S. drug prices on behalf of Medicare and private insurers—capping prices at 120 percent of what is paid in six other nations: Australia, Canada, France, Germany, Japan, and the UK.

The results show that negotiating prices based on what's paid in these other countries could have reduced American spending for the drugs by at least half in 2020—a savings of $83.5 billion.

Responding to the Opioid Crisis

“[Let's] beat the opioid epidemic. There is so much we can do. Increase funding for prevention, treatment, harm reduction, and recovery. Get rid of outdated rules that stop doctors from prescribing treatments. And stop the flow of illicit drugs by working with state and local law enforcement to go after traffickers.”

Fentanyl and other synthetic opioids are leading drivers of rising overdose deaths in the United States. Our experts recently supported the Commission on Combating Synthetic Opioid Trafficking in its research, analysis, and report writing. The commission developed a wide range of recommendations that could help address this problem.

“Veterans are the best of us. I've always believed that we have a sacred obligation to equip all those we send to war and care for them and their families when they come home.”

President Biden referred to his administration's efforts to provide veterans with job training, housing, and health care. RAND research has examined these and other issues that affect America's former service members.

RAND researchers analyzed more than one million records of veterans' employment and earnings after their separation from the military. They found that veterans frequently earned less after leaving the military than they did during active duty. This suggests that more support may be needed to help service members build marketable career skills and transition into the civilian workforce.

A yearlong RAND study followed 26 veterans experiencing homelessness in Los Angeles. Even though all participants lived near a major VA service center, only three had permanent housing by the time the study ended. The findings reveal that, even though housing was a priority for the veterans who participated in the study, they struggled to find options that were safe, private, and respected their autonomy. To address this, the VA may need to invest more in outreach services that can help veterans find stable, permanent housing that meets their specific needs.

Veterans use multiple sources of health care, including care delivered by private providers. But according to a 2018 RAND report, most private-sector health care providers lack the specialized knowledge and training to treat veterans. For example, these providers were often unfamiliar with military culture or failed to routinely screen for conditions common among veterans. More work needs to be done to prepare the civilian health care workforce to address the unique needs of veterans.

When RAND researchers conducted an in-depth review of existing literature to understand what the evidence says about the effects of gun policies, they found moderate evidence to suggest that background checks may reduce firearm homicides.

This research was part of RAND's ongoing Gun Policy in America initiative, which aims to establish a shared set of facts that will improve public discussions and support the development of fair and effective gun policies.