Where Is Business in Russia? 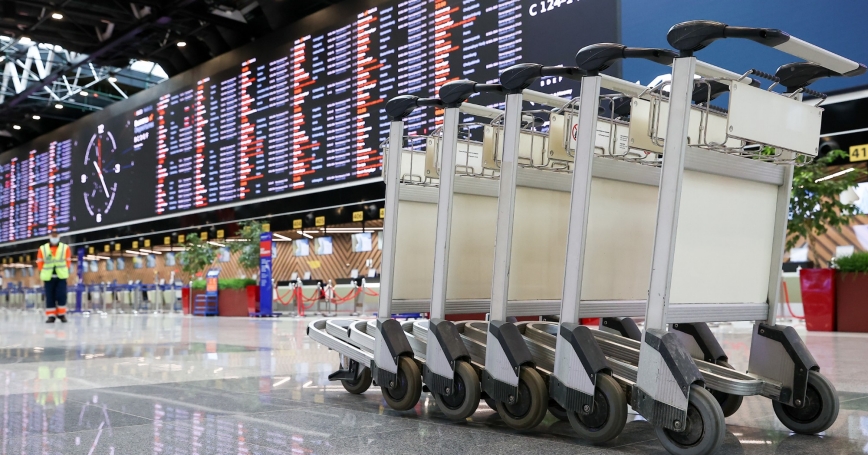 An empty airport terminal at Sheremetyevo International Airport after Aeroflot suspended most international flights in order to keep leased aircraft from being detained due to sanctions, in Moscow, Russia, March 8, 2022

In normal times, businesses in Russia complain that financial markets undervalue their equity. But this likely reflects challenging business conditions and political risks. Yet these problems pale in comparison to the catastrophic hit to business value from Russian aggression in Ukraine and the ensuing sanctions. By separating themselves from the state or opposing the war, private businesses may better protect their long-term interests.

Russian President Vladimir Putin is likely aware of business unease. At a February 24 meeting with business leaders, the head of the Union of Entrepreneurs and Industrialists cautioned him that Russia needed to remain “part of the global economy.”

After the 2014 invasion of Ukraine, Russian business lost favor with Western banks. Now it may be treated as a pariah.

A few Russian business leaders have voiced unease but not cast blame. Banker Mikhail Fridman said he wanted the “bloodshed to end.” Steel tycoon Alexei Mordashev called for an end to the “tragedy of two fraternal peoples.” Banker Oleg Tinkov was more direct, saying he was “against this war.”

Many international companies with global reputations to protect are exiting Russia. Exxon, Shell, and BP are leaving behind multi-billion-dollar stakes. Airbus and Boeing are halting parts supplies and suspending aviation services. FedEx, UPS, and Maersk are ceasing deliveries.

Russia's economy suffers for multiple reasons. Beyond the stupendous value destruction from new sanctions, economic vitality is burdened by weak property rights, Kremlin cronyism, state control of major parts of the economy, and corruption and criminality.

Current Kremlin leaders, mostly security service veterans, seem oblivious to economics. On February 25, Putin said of the snowballing sanctions, “we will even benefit … because we will acquire additional competencies.” But increased economic autarky tends to breed inefficiency.

Many businesses in Russia are wary that close ties to the Kremlin can be bad for business. They fear being more vulnerable to its political pressures or to Western sanctions.

In contrast to Putin's optimism, Bloomberg Economics forecasts a decline in Russia's economy this year of about 9 percent. JPMorganChase sees a drop of 7 percent. These estimates exceed the wrenching fall of just over 5 percent in the 1998 debt crisis.

Many businesses in Russia are wary that close ties to the Kremlin can be bad for business. They fear being more vulnerable to its political pressures or to Western sanctions.

A few years ago, a prominent tycoon told me he hesitated to make a $2 billion investment in one of his businesses for fear of being sanctioned halfway through and losing it. Alas, in the West he was perceived as linked to the Kremlin and sanctioned.

Private business in Russia can play a vital role in independent civil society. It has financial resources, and its prospects often depend on maintaining public and elite confidence.

In 2019, Ivan Golunov, a respected investigative journalist, was arrested on bogus narcotics charges. Private newspapers took up his cause and within days he was released, a rarity in Russia. A respected tycoon's family supported dissident Alexei Navalny and last year paid $100,000 for a medevac flight to take him from Siberia to Germany for treatment. The security services had poisoned him. The tycoon also provided quiet support to independent media.

Businesses in Russia have little hope of making a full recovery and operating normally in the global economy unless the West lifts its extraordinary sanctions. This is unlikely unless Russia ends its war in Ukraine, withdraws all forces, and returns Crimea to Ukrainian control.

The West might also require that Russia withdraw its forces from Belarus, which could lead to the collapse of the hated Lukashenko government, and from neighboring states that do not want them, such as Georgia and Moldova.

Businesses in Russia have little hope of making a full recovery and operating normally in the global economy unless the West lifts its extraordinary sanctions.

This is a tall order. But it's possible that the West may not settle for less. Achieving this is unlikely without more-open and less-hostile governance in Russia. The current Kremlin leadership seems incapable of reversing its repressive and aggressive policies.

The interests of private business in Russia, and of Ukraine and the West, may be generally aligned. All would benefit from an end to Russian aggression in Ukraine and a Kremlin leadership that valued economic and social interests of Russians over geopolitical adventures.

Business in Russia cannot be indifferent to Kremlin political power and governance that destroys so much value. Political and civic engagement may be essential to protect their value and the interests of shareholders and employees.

This commentary originally appeared on The Hill on March 16, 2022. Commentary gives RAND researchers a platform to convey insights based on their professional expertise and often on their peer-reviewed research and analysis.