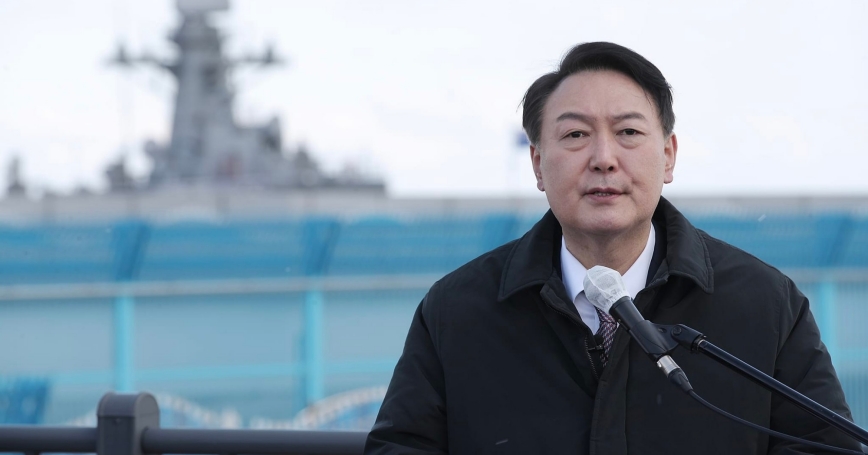 File photo of Yoon Suk-yeol, who was elected president of South Korea on March 9, 2022

A former top prosecutor, Yoon won the March 9 presidential election by a razor-thin margin of less than 1%, or roughly 247,000 votes, over his opponent Lee Jae-myung. The election, with a 77% voter turnout, was South Korea's tightest race since the country began holding free elections in 1987.

Widely considered a novice in politics partly due to his lack of legislative experience, Yoon faces the herculean task of reuniting a polarized South Korean society disillusioned by corruption, socioeconomic inequality, and the ever-unfolding impact of the COVID-19 pandemic.

The ruling Democratic Party, furthermore, will still maintain the progressive majority in the National Assembly until the April 2024 legislative elections, likely serving as a viable counterbalance to the president-elect's agenda. On the foreign policy front, Yoon must contend with a determinedly belligerent North Korea, a diluted alliance with the United States, brimming U.S.-China tensions in the region, and a sticky historical resettlement issue with Japan.

Yoon, in short, has his work cut out for him. To compound the pressure, South Korean media have already started speculating on the makeup of Yoon's presidential transition committee and likely policy priorities of the new administration. International watchers, too, have begun placing bets on the Yoon administration's policy toward its neighbors.

U.S. President Joe Biden congratulated Yoon on his election win just hours after he was declared the winner of the race. Japan's Prime Minister Fumio Kishida cautiously expressed optimism regarding an improvement in Tokyo's strained relations with Seoul. China, for its part, congratulated Yoon's election win while reminding the new president that the two countries were crucial partners who could not be separated from each other.

Expectations and scrutiny will be riding high for the incoming Yoon administration. Against this backdrop, what could a Yoon presidency mean for South Korea's foreign policy?

Expectations and scrutiny will be riding high for the incoming Yoon administration.

A shortcut answer might be divined through Yoon's position on one issue: North Korea. Yoon views the Moon Jae-in administration's policy of engagement toward North Korea as subservient and has vowed to take a tack from his predecessor in dealing with leader Kim Jong Un, whom Yoon recently called a “rude boy” who needs to be taught some manners.

Under a Yoon presidency, Seoul will place emphasis on North Korea's denuclearization as a litmus test of Kim's sincerity to reduce tensions with its neighbors and build peace on the Korean Peninsula.

As part of his efforts to deal with the North Korean nuclear and missile threat, Yoon has pledged to normalize U.S.–South Korean joint military drills, which had been scaled down under the Moon administration as part of its objective to foster an atmosphere more conducive to peace and dialogue with Pyongyang.

Yoon also seeks to enhance the United States' extended nuclear deterrence and interoperability between the two allies. This, while music to Washington's ears, bodes ill for Pyongyang, which would much prefer a more pliant and accommodating Seoul that would stand less in the way of Kim's nuclear pursuits and provocations.

Yoon's prioritization of the North Korea issue in South Korea's foreign policy, specifically his emphasis on North Korea's denuclearization and willingness to stand up to Kim's bullying, seeks to place the Seoul-Pyongyang dynamic on a more equal footing.

By extension, because this position aligns with the U.S. goal of the denuclearization of North Korea and implies the U.S.–South Korea alliance as the critical factor in dealing with the Kim regime, it could set the alliance on the path toward cooperation and coordination.

The United States, which is dealing with myriad foreign policy challenges during a watershed moment in international geopolitics, may view coordination with Seoul on the North Korean threat as a window of opportunity to extend and expand the alliance into other areas of mutual concern, including the Russia-Ukraine war and Washington's ongoing strategic competition with Beijing.

The United States may view coordination with Seoul on the North Korean threat as a window of opportunity to extend and expand the alliance into other areas of mutual concern.

Seoul's pivot back to squarely addressing the North Korean nuclear issue could help renew the alliance's vows based on shared values and common goals for the region. And while wartime issues over Korean laborers allegedly forced to work in Japan and the so-called comfort women who worked in front-line brothels linger between the two countries, Yoon's emphasis on future-oriented ties puts Seoul-Tokyo ties under the new administration in a more optimistic light.

Beijing, for its part, may be sitting on pins and needles as it watches the Yoon administration unveil its foreign policy in the coming weeks and months. Seoul's more-confrontational stance toward Pyongyang could steer its relations with Beijing toward a similarly commensurate dynamic.

Though not entirely a harbinger of tensions, this could bode ill for China and its efforts to maintain its long shadow of political and economic coercion over its neighbors, a critical factor in Beijing's ability to check the expansion of Washington's influence in the region.

With a tall order to fill at home and abroad, the Yoon administration has the potential to reshape South Korea's future and relationships in the region. The path that he carves for Seoul in the coming weeks and months will be watched with keen interest marked by hopes and apprehension by his neighbors.

Soo Kim is a policy analyst at the nonprofit, nonpartisan RAND Corporation and a doctoral candidate at Johns Hopkins University SAIS.

This commentary originally appeared on Nikkei Asia on March 16, 2022. Commentary gives RAND researchers a platform to convey insights based on their professional expertise and often on their peer-reviewed research and analysis.