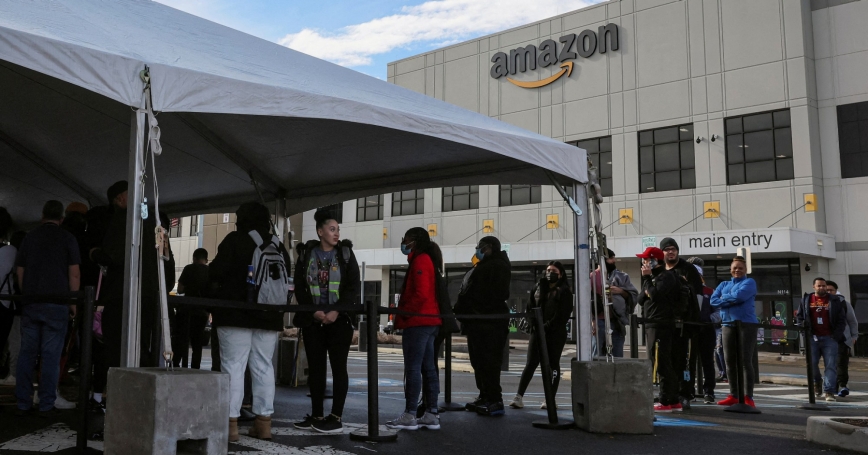 Workers stand in line to cast ballots for a union election at Amazon's JFK8 distribution center, in the Staten Island borough of New York City, March 25, 2022

Workers in the United States have made significant gains during the recovery from the coronavirus pandemic. Wages are rising, employers are offering more perks, pundits are proclaiming the office obsolete, and unions are resurgent. Earlier this month, Amazon employees at a Staten Island warehouse achieved a breakthrough unionization, following on the heels of the first unionization of a Starbucks and last fall's “striketober” actions at John Deere, Kellogg, and elsewhere.

So is a new era of worker power emerging? I'm doubtful. By any meaningful measure, employers are still in charge.

Take the so-called end of the office. News outlets have been full of articles describing millennials' demands for remote work options and portending downtown real estate implosions. Can people work anywhere there's a stable internet connection? Maybe, but the majority of workers who were remote have returned to the office. Although interest in remote work doubled after the pandemic hit, searches with the term on the site Indeed plateaued last year at about 5 percent of all searches.

Remote work was also heralded as more inclusive. Mothers enjoyed more flexibility, and Black workers reported feeling more valued and fairly treated. The sobering prediction from economists, however, is that those who stay at home will probably be paid and promoted less. Whatever changes to work norms that linger will probably come with a penalty, one that mirrors the current, deeply entrenched pay disparities.

Whatever changes to work norms that linger will probably come with a penalty, one that mirrors the current, deeply entrenched pay disparities.

Workers in retail and hospitality, among the hardest hit by the pandemic, are supposedly benefiting now as employers offer signing bonuses, college tuition reimbursements, and higher wages to lure them back. Yet there's also evidence that they must work a minimum number of hours to receive such perks—and few, or possibly none, are assigned enough hours to qualify. Schedules for shift workers remain as unpredictable and unstable as ever.

Meanwhile, ample evidence points to a deep and persistent power imbalance between workers and their bosses. Consider the concentration of employers: By one measure (PDF), the average local U.S. labor market is dominated by just a few firms (or the equivalent thereof), far exceeding the threshold that the Justice Department considers highly concentrated. Nationally, just two companies—Amazon and Walmart—employ 3.9 million people, or about 3 percent of the private-sector workforce.

This market concentration can give employers what economists call monopsony power (a monopsony being like a monopoly, but referring to the buyer rather than the seller). The more monopsonistic a labor market is, the less companies have to compete for workers—making it hard for the latter to demand higher wages or better working conditions.

Employers exercise their power in various ways. Some agree not to hire one another's workers—a practice that got six tech companies (Adobe, Apple, Google, Intel, Intuit, and Pixar) in trouble with the Justice Department in 2010. Some franchises such as fast-food restaurants use no-poaching agreements, which block employees from moving to competing locations—though many dropped the practice before the pandemic. And by one 2017 estimate (PDF), roughly one in four U.S. workers is or has been subject to a non-compete clause, which—as it says right there in the name—reduces competition in the labor market.

The more monopsonistic a labor market is, the less companies have to compete for workers—making it hard for the latter to demand higher wages or better working conditions.

Perhaps the most damning evidence of monopsony power comes from wages. In a recent overview (PDF), the U.S. Treasury cited research suggesting that workers are paid as much as 20 percent less than they would be in a competitive market. This is the equivalent of skimming $200 off the U.S. median weekly wage of about $1,000. The monopsony wage penalty is not uniform (PDF), however; some workers may be more affected, and others not at all, depending on their industry, occupation, and labor market.

For all the hype surrounding the “future of work,” the United States remains at a modern nadir of labor power. Indications that this is changing might include guarantees and protections for workers who choose part-time or flexible arrangements, paid sick days for all workers, the right to know one's schedule two weeks in advance with penalties for last-minute changes, or even an increase in the federal minimum wage after 15 years without one.

Workers may have emerged from the pandemic with new preferences and demands, but they still lack the power to get what they want.

Kathryn A. Edwards is a labor economist at the nonprofit, nonpartisan RAND Corporation.

This commentary originally appeared on Bloomberg on April 20, 2022. Commentary gives RAND researchers a platform to convey insights based on their professional expertise and often on their peer-reviewed research and analysis.