Russia and Ukraine: The Economic Consequences of Peace 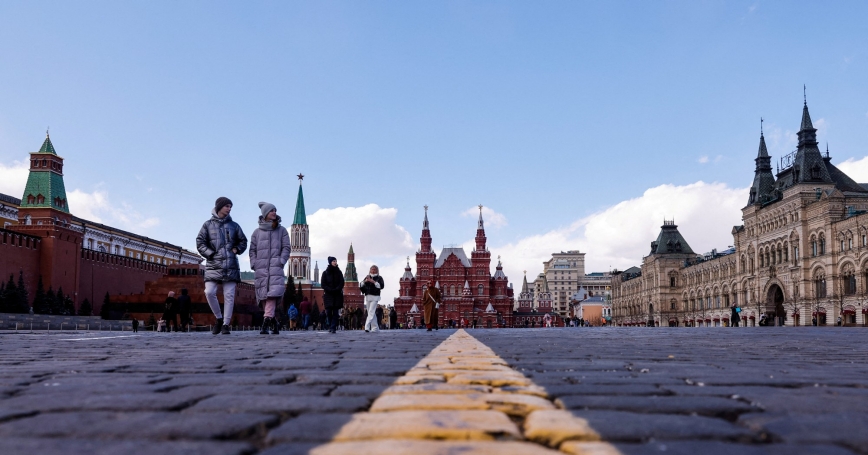 Amid some hopeful signs in Russian-Ukrainian ceasefire talks, it may be useful to keep in mind that the West could gain substantial economic leverage to influence outcomes during and after Russia's war against Ukraine. How it uses this leverage could have far-reaching consequences.

One goal might include ensuring that Ukrainians benefit while Russia pays a heavy price for its aggression. A second could be to encourage a future Russian government that is less likely to threaten Ukraine or other countries.

The West seems likely to have two main instruments of leverage—punishing sanctions and control over an estimated $300 billion in blocked Russian official assets.

This robust leverage gives the West an interest in any peace negotiations between Russia and Ukraine. Generally Western and Ukrainian interests will align, but there could be differences. For example, if under duress Ukraine negotiated an arrangement that left Russian forces in place in Crimea or other parts of Ukraine, the West might take a firmer position.

The West could refuse to ease or lift its extraordinary sanctions so long as any Russian forces remained in Ukraine. The West might demand that Russian forces also leave Georgia and Moldova, where they are resented. In other words, the Western goal might go beyond a return to pre–February 24 invasion conditions and expect that Russia reverse all its unwanted extraterritorial occupations.

The West seems likely to have two main instruments of leverage—punishing sanctions and control over an estimated $300 billion in blocked Russian official assets.

The United States and the European Union have charged Russia with war crimes in Ukraine. The West could seek to use its economic leverage to bring alleged perpetrators to justice. In 2001, the International Monetary Fund, United States, and World Bank used such leverage to induce Yugoslavia to bring former President Slobodan Milosevic before an international war crimes tribunal.

Reconstruction could also be a point of leverage. If Russia occupied part or all of Ukraine and installed a puppet government, the West might not transfer blocked funds to it despite humanitarian or reconstruction needs. The West might be more flexible if respected international institutions were to carry out projects that benefited ordinary people. If the Zelenskyy government or a legitimate successor retained control over part or all of Ukraine, the West might provide generous resources.

Finally, in return for sanctions relief, the West might seek changes inside Russia. The March 22 conviction of imprisoned oppositionist Alexei Navalny on yet another sham charge is a reminder that Russia is more repressive now than at any time in its 30 years of modern independence. The West might worry that risks of further Russian aggression could remain high if a repressive regime stayed in place.

Thus, the West might insist on measures to enhance respect for human rights, such as the release of Navalny and other political prisoners. The West could demand that Russia reform or abolish security services, such as the hidebound Federal Security Service (FSB). It is hard to imagine that the current regime would reign in this inheritor of the Soviet-era KGB.

The issue of reparations might be contentious. In 1919 in “The Economic Consequences of the Peace,” renowned economist John Maynard Keynes warned of severe consequences from the Treaty of Versailles, which formally ended World War I. He said steep reparations and other penalties could cause economic collapse in Germany and pain elsewhere in Europe and globally.

With Russia for years suffering slow growth and underinvestment, the burden of paying reparations could degrade Russians' living standards and make them more receptive to populist or authoritarian rule.

Economies of aggressors in major wars have recovered well when those countries have transitioned to more open and humane governments and cooperated more with the international system. But repressive countries facing economic constraints, such as Iran did with sanctions through 2015, have suffered high unemployment, inflation, and economic decline.

Likewise today, with Russia for years suffering slow growth and underinvestment, the burden of paying reparations could degrade Russians' living standards and make them more receptive to populist or authoritarian rule.

The West might intensify public diplomacy to inform Russians about what is happening in Ukraine and Russia's responsibility for laying waste to civilian targets. Better informed Russians might be less resentful of future economic burdens and more willing to oppose repressive rulers.

The West might be prudent to foster debate on all these issues. Changes in the current situation could come at any time and require Western decisions. While the West will want to use its economic leverage to benefit beleaguered Ukraine and its courageous citizens, some considerations may be complex or not yet well defined.

Randy Bregman is senior counsel in the Dentons U.S. LLP Washington office. William Courtney, an adjunct senior fellow at the nonprofit, nonpartisan RAND Corporation, was U.S. ambassador to Kazakhstan, Georgia, and U.S.-USSR negotiations to implement the Threshold Test Ban Treaty. Howard J. Shatz is a senior economist at RAND and a professor of policy analysis at the Pardee RAND Graduate School.

This commentary originally appeared on The Hill on April 8, 2022. Commentary gives RAND researchers a platform to convey insights based on their professional expertise and often on their peer-reviewed research and analysis.